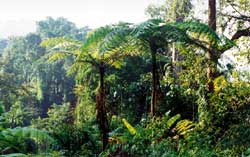 for years the rainforests of Assam have suffered the ignominy of isolation and neglect. Attempts are now underway to conserve this national heritage with active public participation. As a measure of this enterprise, a three-day festival rejoicing the cultural and spiritual links between these rainforests and the local communities was held recently in the Joypur town of Dibrugarh district. The event, the first of its kind in the country, celebrated folklore, music and arts that have emerged from the rich rainforests tracts of the state. More importantly, it highlighted the endeavours of the people of Assam in putting this rich green belt on the global map of biodiversity conservation. Spearheading this movement was Nature's Beckon, an environmental group that had successfully mounted a similar campaign earlier. (The organisation was responsible for starting a grassroot movement in 1980s for protection of Chakrashila reserve forests in west Assam.) "Our movement will continue to keep up the pressure on the government, to educate people, to disseminate information about the importance of rainforests,"remarked Nature's Beckon president Soumyadeep Dutta.

The festival brought together environmentalists, politicians, administrators, academics, journalists and the local people to highlight the forests' fragile status. The large attendance was unparalled and evoked several responses. "I have never seen such a huge turnout in any rainforest movement," commented Rosa Maria Ruiz, an eminent rainforest activist who is responsible for creating the two-million-hectare Madidi National Park in Bolivia. The discussions, street plays, exhibitions, cultural functions and the various adventure activities, that marked the unique event, were part the initiative to build a local global citizen base for action in conserving these rainforests. Support for this venture also came from Ashoka Innovators for Public -- a Washington-based non-profit organisation. "The idea behind this festival was to raise a collective voice to save these rainforests from lying fragmented and declare it as Joydihing Wildlife Sanctuary,'' said Pritha Sen, a representative of this organisation.

Pradyut Bordoloi, Assam's minister of state for home and environment, later assured the organisers that the state government would soon take appropriate move for the protection of the rainforest. Another impressive example of government participation came with the allotment of land to Nature's Beckon for setting up a Rainforest Research Centre and Museum.
While conducting a primate study in 1996, Nature's Beckon came across a belt of fragile virgin rainforest in the Dibrugarh and Tinsukia district of upper Assam. For the next four years, they surveyed and mapped the areas. It was found that these forests, which are a contiguous patch of three other reserve forests of Joypur, Upper Dihing and Dirak, had the multi-storeyed structure, with dense habitation of numerous plant species. There was a riot of darkness, humidity and a complex system of floral layers inside these forests comprising huge light demanders that vary from 65 to 150 ft to emergent layers of trees, shrubs, vines, ferns and other plants.

According to Dutta, "The destruction of forests in Assam was so rampant that we almost undermined the presence and the characteristics of these rainforest." But there are more reasons for the isolation of Assam rainforest from the national overview . Throughout the decades, the reference of Assam rainforest has appeared in various national and international reports, but in a subdued manner. From 1989 to 1994, broad surveys on primates and the endangered white-winged wood duck of the Assam rainforest were published by Guwahati-based environmentalist Anwaruddin Choudhury.

Although the state government knew about the existing rainforest in upper Assam area, little had been done to promote stringent protection norms to save the last patches. Even the experts' findings and perceptions of these forests somehow could never translate into a conservation movement as a result of the state's apathy. On the other hand, under the reserve forest status, these patches of rainforests became areas for exploitation. "Throughout the government did nothing to save these rainforests which are also home to several endangered species," says Bibhab Kumar Talukdar, a wildlife biologist and general secretary of Aaranyak Nature Club, a leading environmental organisation of Assam.
According to the German botanist A F W Schimper, the term tropical rainforest refers to the forests of the permanently wet tropics. The structural properties of these forests include the height of the trees, whether they tend to have their crowns in layers and the presence of different kinds of climbers and epiphytes. Amongst the various tropical rainforest formations exist the most structurally complex and diverse land ecosystems with the greatest numbers of co-existing plant and animal species. In species richness they are only rivalled by coral reefs. These lofty forests are, thus, the apex of creation.

Constant high temperature is characteristic of tropical climates and climates in which the mean temperature of the coldest month is 18 C or over is often used as definition. This excludes some tropical montage areas and a difference of less than 5 C between the mean tempertures of the warmest and coldest months is sometimes used as an alternative definition. Rainfall is the second most important factor, and its amount, and even more its distribution through the year, define different tropical climates.

Tropical rainforests occur in all three tropical land areas. Most extensive are the American or neotropical rainforests. These occur in three parts, of which the largest lies in the Amazon and Orinoco basins. Second is an area which lies across the Andes on the Pacific coasts of Ecudor and Colombia, extending northwards through middle America as far as Veracruz in southernmost Mexico. The Atlantic coast of Brazil has the third.

The second largest block of tropical rainforest occurs in the Eastern tropics. It is centred on the Malay archipelago, the region known to botanists as Malaysia and Indonesia. It occupies most of the archipelago and is second to Brazil in the amount of rainforest it possesses. The eastern rainforests extend beyond Malaysia into the Pacific and southwards as a narrow broken coastal strip in Queensland, northeast Australia. The Malaysian forests extend northwards up the Malay peninsula into continental southeast

Asia, Myanmar, Thailand and Indo-China. There is also an ill-defined change to subtropical rain forest. On the great south wall of the Himalayas in upper Myanmar, Assam and southern China, rainforests reach further away from the Equator than anywhere else. There are further outliers, in southwest Sri Lanka centred on Sinharaja and also on the western Ghats of India, where seasonality is strong.

Africa has the smallest block of tropical rainforest and this is centred on the Zaire basin, reaching from the high mountains at its eastern limits westwards to the Atlantic Ocean with outliers in East Africa.