The district is all set to become the first in Rajasthan to completely stop open defecation. Will others follow? 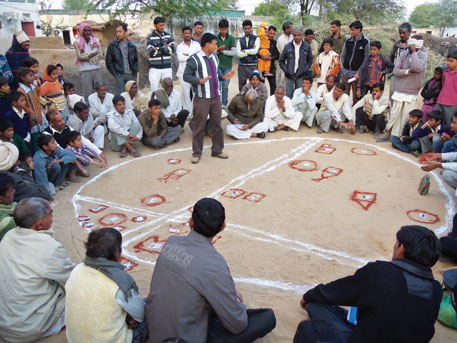 THE DESERT state of Rajasthan has for long struggled with the problem of open defecation. Census 2011 says about 80 per cent households in rural Rajasthan do not have toilets. While the state’s sanitation situation looks depressing, the story of one of its districts instils hope.

Churu, which is the gateway to the Thar desert, is all set to become the first district in the state to boast zero open defecation. The northern district plans to achieve the feat by August this year.

So what helped Churu realise this goal? A campaign the local administration started in 2012 that was able to involve the people in the process. “The slogan ‘Chokho Churu’ or clean Churu was popularised along with an intense awareness and education campaign to change the sanitation scenario of this district,” says Churu district collector Archana Singh. Three years later, the impact of the campaign is visible. Almost every house in the district has flush toilets and the people say open defecation is unthinkable. “Open defecation makes the sandy fields dirty and this harms our health,” says Gaurishankar, a resident of Lunas gram panchayat in Taranagar block, which was the first block to stop open defecation. Just five per cent households in the block had flush toilets till 1998.

Not an easy task

Churu witnesses temperature variations from -5 0C in winters to 50 0C in summers. The average rainfall it receives is just 343.74 mm annually. And the groundwater has high saline content making it unfit for irrigation or drinking.

“Sanitation was not the only problem. The area was also struggling with salinity in the surface and underground water,” says Gautam Sadhu, a professor with the Institute of Health Management Research, Jaipur. This was the first challenge in promoting toilets because the residents were unwilling to use clean water in toilets (see ‘People’s power’). The district administration, after talking to NGOs, residents and other stakeholders, realised that they could use the saline groundwater for toilets.

The then Churu district collector Rohit Gupta started a large-scale campaign in November 2012. “The campaign at Churu, which was started from Taranagar block in the district, had a unique design. It was based on institutional arrangement, communication, capacity building, phasing, financing, monitoring and rewards,” says Gupta. The campaign followed the Centre’s community-led total sanitation model.

The group started visiting gram panchayats where it would spend at least two days sensitising the people on the need for toilets. They talked to the village residents on how open defecation contaminates their fields, water bodies and even milk. The visit was followed by the setting up of a local nigrani(watch) committee with 10-20 local volunteers who would popularise the idea of constructing toilets in the panchayat.

The exercise, implemented under the direct supervision of district coordinator, followed a systematic calendar. At the start of the campaign, just five panchayats could boast of having zero open defecation.

And today, all 28 grampanchayats of the block have achieved an open defecation-free status.

How Taranagar achieved the feat

“AapniYojana was launched in the late nineties (in Churu and two more districts) to supply drinking water and to improve the health of the population,” says Sadhu. Under the scheme, local construction labourers were trained to build toilets. By 2003, around 50 per cent households had toilets. “This did not solve the problem of open defecation. Till 2012, the overall district had over 40 per cent of households without toilets,” says Sharma.

In October 2012, Gupta got posted in Churu and he decided to implement the campaign in three phases. Taranagar block was chosen in the first phase, Sardarshahar, Rajgarh and Churu blocks were chosen for the second phase and the remaining Sujangarh and Ratangarh blocks were chosen for the third phase. The campaign was started with Taranagar because it benefitted the most under the Apni Yojna scheme and had the maximum toilet coverage among the six blocks of Churu.

“In the first meeting held under the campaign, Gupta invited sanitation workers, local administrative officers and village headmen of gram panchayats to understand the reasons for open defecation,” says Chagan Lal, who was the gram panchayat secretary of Lunas at that time. The second meeting involved local health workers and school teachers. “We started with the Lunas gram panchayat. First we educated the residents about the government’s sanitation programme, Nirmal Bharat Mission, and sensitised them on the benefits of using toilets,” says Sharma. “The meetings continued every week, till all the stakeholders were involved,” says Lal. 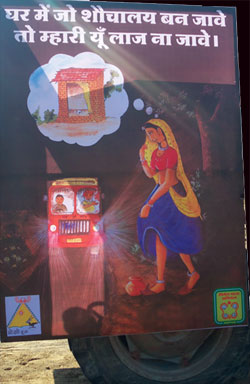 Just one month after the launching of the campaign, all the key parties in the district had embraced this idea. Zilla Panchayats and other elected representatives started taking interest in the campaign.

At the meetings, the participants not only discussed how to construct toilets but decided on how to provide water for the toilets. It was decided that households will use pumps to extract the saline groundwater and use it for toilets. And in places where the groundwater level is low, rainwater will be collected for the same.

The next step was to generate interest among village residents to make the community-based sanitation model a success. “Open defecation is often linked with rural poverty but this is not true. Lack of awareness and not money stopped people from constructing toilets in Churu,” says Gupta. A basic toilet in rural areas costs as low as Rs 8,000.

He says toilets constructed without the support of the residents become dysfunctional as the households did not use them. So the administration banned outside agencies and asked local masons who were trained under AapniYojana to construct the toilets. “This involved the people and made the project a success,” says Gupta. Also, once a household had a toilet, ‘Chokha Ghar’ or clean house was written on the walls by the panchayat. As the popularity of the campaign increased, this became a status symbol.

Involving the people helped the campaign in interesting ways. There were cases in the block where rich people helped the poor with money and raw materials for construction of toilets which the poor repaid after receiving funds from the government. This happened because the entire village believed and participated in the campaign.

Over 10,000 toilets were constructed in Taranagar block between January and October 2013 with government funding. An equal number of toilets were built privately.

Churu’s success story is inspiring other districts in Rajasthan. The model, for instance, is being replicated in water-stressed Pali district. Gupta, who is currently posted as Pali district collector, started ‘Futro Pali’ (beautiful Pali) sanitation campaign in the Bhanwari gram panchayat in Pali in July 2014. Just 10 per cent households in the panchayat had toilets before the campaign. In just four weeks, all 1,200 households in the panchayat had toilets.

“The sanitation drive that has started at Churu should now be implemented across the state. It will change the state of sanitation in rural Rajasthan,” says Singh.

Churu has shown that having flush toilets in water-stressed places is possible. What remains to be seen is how interested is the government.