The grim picture of a lung scarred by pollution is of no shock value today. An ailing populace continues to throw up a phlegm of protests. To shock the conscience of the country, slowly a body of evidence is emerging -- studies of the hidden health cost that the country bears, the generation of ailing children our lackadaisical polity has led to and premature deaths the society suffers -- of the deadly association between air pollution and public health. Chandrachur Ghose reports on eight such pioneering studies, conducted in five cities, linking public health and air pollution, the results of which should shake the decision makers out of their stupor and force them to correct the existing systems for air quality management 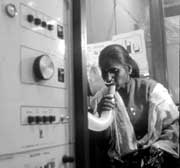 In 1977, S R Kamath, then professor of respiratory medicine at kem hospital, Mumbai, took up a detailed study to find out how people in the city were suffering from air pollution. It was one of the earliest studies to be undertaken in India -- nearly two decades after similar work had been done in the West. In these three decades that have passed not much other research has been conducted to comprehend and address solutions to the growing menace. What little has been done in the name of research on air pollution and health is, as Manas Ranjan Ray of the Kolkata-based Chittaranjan National Cancer Institute, puts it, "mere measurement of air pollution levels and exposure level assessments". Very few scientists and doctors have studied the actual health effect of air pollution, he adds. Ray points out that the earlier preoccupation with smoking being the primary cause of the respiratory ailments has now been dispensed with and air pollution is held squarely to blame.

Why is there such a lack of base line data on air pollution and public health linkages. T K Joshi, of Lok Nayak Jai Prakash Hospital, New Delhi, answers, "The blame lies with the way physicians are trained. They are interested solely in clinical practice. That is why the country is bereft of any academic basis for environmental epidemiology."

The government is as much to be blamed. With no policy mandate to conduct the time-consuming interdisciplinary research in environmental epidemiology the medical researchers have their hands tied. The little that has happened on the front, admits Joshi, is due to the impetus provided by the civic society that has striven hard to put air pollution-related research on people's, the medical community's and the government's agenda. A section of the medical community has also come forward to support -- for instance, the Delhi Medical Association and the Indian Medical Association have lent support to the New Delhi-based Centre for Science and Environment's 'Right To Clean Air' campaign.

And a distinct change in the attitude of a section of the medical community towards this vital area of public health has become evident. Studies analysing the health effects of air pollution have emerged from around the country, though very few in number show. The studies reported here are based on five cities. Pieced together, the evidence provided in these research papers evokes a frightful image of the Indian metros.

Yet most of these studies also leave a lot to be achieved in terms of quality. The studies are disparate in terms of methodologies. While two studies from Kolkata look into the reaction of the human body at the cellular level, one from Chennai emphasises more on the economic cost of health effects, and those from Mumbai and Delhi show a very broad link between the pollution levels and health effects. Even the number of people studied and the time period over which the studies are done is very small when compared to epidemiological studies done abroad. "These studies are descriptive rather than analytical," says Joshi. Analytical studies demand time and resources that are not yet available in India. This year the Union ministry of environment and forests has mooted a proposal to take up a comprehensive study in nine cities over two years to build a profile of environmental health, of which health effects of air pollution forms a part.

Yet, even the results of the eight case studies profiled here do throw up information which can help frame a more sensible policy for controlling air pollution.


Another aspect which is brought forth by some of the studies is the magnitude of health costs in the country.

A recent study from Chennai shows that the per capita health cost due to air pollution in a small municipality with 2.11 lakh people is Rs 783 per annum. The economic costs due to mortality in Delhi amounts to Rs 100 crore per annum. The health cost of air pollution in Mumbai is now estimated to be at the range of Rs 600-700 crore per year and vehicular emissions are responsible for 60 per cent of this. When will the government internalise these costs in its balance sheets before deciding upon what is 'economically' more viable -- controlling pollution or supporting an ailing population.

One of the critical issues that many of these studies put forth is the standard of air quality monitoring in the country. While the Western countries are moving on to monitor more toxics and finer particles in the air, there are still only three pollutants that are regularly monitored in the Indian cities; and these definitely fall short of adequately capturing the correlation between specific pollutants and their health effects.


Consider one of the rare studies conducted relating a specific pollutant to health problems. Project Lead-Free, the first major study in Indian cities of its type, was inititated by the Bangalore-based George Foundation in 1997. It tested the level of lead in the blood of more than 2,000 children and adults in five large cities.

More than half the children were found to have lead levels in blood above the permissible limit, one out of eight children had twice the limit. The state of adults was slightly worse -- one out of seven had twice the permissible level of lead in his blood. But where did this lead come from? According to the George Foundation, in India, as in most developing countries, the main source of lead pollution is automobile exhaust.

This study is an exception in India. Specific pollutants are not yet targeted for research. No study available looks into what effects toxics like ozone, polyaromatic hydrocarbons and benzene have on the health of people. The density of monitoring stations and the frequency of monitoring is inadequate and so are the techniques used.


Another revelation of the stories is the fast disappearing rural-urban divide in India; at least as far as the spread of air pollution is concerned. But the sources of rural air pollution are yet to be traced. "The present monitoring set up does not have the capability to capture the movement of pollutants from the cities to the suburbs and surrounding rural areas or vice versa," says B Sengupta, member secretary, Central Pollution Control Board. Yet, these studies are narratives of a sordid tale of neglect. They demand a response and a closer look at the mounting toll air pollution takes on the Indian society. They show that scattered independent efforts often remain inadequate without institutional support. While these studies keep trickling in by individiual inititative, the much required institutional support remains but a promise.