The Centre for Science and Environment (CSE) has been doing research on health and environment in the public interest. But most government agencies, which are there to serve the people, not only refuse to share information but also create obstacles whenever CSE researchers try to get hold of information 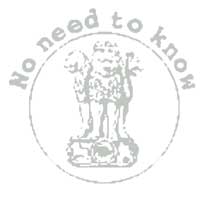 Repeatedly, the establishment has sent out the message that information relating to public health does not have to be shared with the people
if only they could talk, government agencies would have nothing to say. The set-up believes in withholding information of crucial importance to the public - such as poison in the food, toxic gases in the air and lethal pesticides in drinking water. When an organisation or an individual seeks to make it known, officials start acting difficult. This was the experience of cse when its reporters approached the Indian Council of Medical Research ( icmr ) for information on contaminants in food. Getting hold of a copy of a report published by icmr and getting the officials to talk was like banging one's head against a wall.Similarly, cse reporters who wanted to know the government stand on the quality of fuel being supplied in India faced a stony petroleum secretary.

When officials do talk, they speak in a vocabulary that is hardly meaningful. Many of them believe that their job is to actually prevent people from getting hold of information. So they threaten or beat around the bush and do not commit themselves to such simple things as getting a permission. This was the experience of cse reseachers when they approached the Automotive Research Association of India ( arai ) for data on emission levels of car engines in India. cse reporters working on management of protected areas faced an identical problem.

A third weapon in the hands of the establishment is to penalise officials who make the mistake of giving out information. This is what happened when the cse publication Homicides by pesticides quoted a state scientist on the (absence of) monitoring of Yamuna waters in Haryana.

In fact, information is not even given out on a 'need to know basis' by government agencies. The system is one up on that: the people simply do not need to know. Those who approach them hopefully and with an open mind are remin-ded of this again and again.

Even the Supreme Court ( sc) has proved to be an impenetrable barrier. Dedicated to publicising threats to human health and environment, cse wanted to make the recommendations of the Saikia Committee setup by the sc on vehicular pollution known to the public. The recommendations were important for a transpa-rent process for standards to monitor air pollution. Moreover, all interested parties, including citizens' groups and ngo s, should have access to such crucial information . So cse wrote to the sc registrar in December 1996, requesting for copies of the 27 reports that the Committee had submitted to the Court. I t received a brief reply from assistant registrar Raj Gopal saying that the request "could not be acceded to". cse then wrote to R D Sharma, private secretary to Justice Saikia, making the same request. Justice Saikia wrote back promptly: "In view of the refusal by the Hon'ble Supreme Court, it is regretted that this office is unable to supply a copy of the report." He explained that after submission to the sc , the reports become the property of the Court.

cse had a similar experience when it tried to get hold of the Indian Council of Medical Research ( icmr ) report on Surveillance of Food Contaminants in India (Part- i ) in mid-1996. Despite innumerable telephone calls, visits, and an impromptu dharna outside the director-general's office, cse researcher Sunita Raina was told that the report was just not available. A revised report was to come out in 1997. The original report, released in 1993, was based on a seven-year study of contamination of food commodities in rural and urban areas. It found that samples of cow and buffalo milk, infant formulas, canned fruit products, turmeric, groundnut and maize showed traces of highly poisonous chemicals like ddt , bhc (benzene hexachloride) and arsenic. But the report was quickly 'withdrawn' after some "faults" were found in the analysis of data on contaminants in baby food. It led to a furore in Parliament.

When cse researcher Nikhat Jamal Qaiyum approached icmr in June 1997, four years after it had been released, the officials said that they had absolutely no knowledge of the status of the reworked study. The title of the report implied that it was the first in a planned series. Asked about the sequel, a top official feigned ignorance. Meanwhile, people all over the country are unaware that they are consuming contaminated food.


Officials are not only unwilling to admit their negligence, but deliberately misinform the public
on february 18, 1997, former Prime Minister Atal Behari Vajpayee released the cse publication Homicide by pesticides at a well attended public meeting. The book had come out with uncomfortable conclusions on the state of drinking water supplied in Delhi. It pointed out that the Yamuna river had alarming levels of pesticides and that the Delhi Water Supply and Sewage Disposal Undertaking ( dwssdu ) was not even attempting to detect them.

The response of the dwssdu officials was bewildering. First, dwssdu treatment and quality control director Som Dutt claimed ( The Hindustan Times, March 17, 1997) that there is "no pesticide in drinking water..." He accused cse of creating "myths." Strangely, the same day, at a Municipal Corporation of Delhi ( mcd ) meeting chaired by Delhi chief minister Saheb Singh Verma, when cse deputy director Sunita Narain said that the Centre stood by its report, the minister agreed that there are 'problems' with the quality of water.

What is more, the Central Pollution Control Board ( cpcb ) testified before the Delhi high court, in a public interest petition based on Homicide by Pesticides , that Yamuna water had concentrations of pesticides beyond limits set by the Bureau of Indian Standards ( bis ) and the World Health Organization ( who ). Homicide by Pesticides was based entirely on government reports (see box: Government turns vicious ).

cse sent a legal notice on April 14, 1997, to dwssdu chief Rakesh Mohan pointing out that it had challenged a report based on government data. The obligation of the dwssdu , it said, was "not just to a fraction of citizens...but to all those who use the facilities throughout Delhi. The right to clean water, good health and environment is part of the Right to Life guaranteed under Article 21 of the Constitution." Despite a reminder, dwssdu did not reply to the notice, although cse' s investigations showed that it had received the letter.

In late April, when cse reporter Saurabh Bhattacharya contacted Dutt, he admitted that Delhi water treatment plants cannot remove pesticide traces in water. But he was hedging. "Pesticides are present in the water," he admitted, "but they are well within prescribed who and bis limits." This contradicted his earlier public statements. When it was pointed out that according to bis 10500, pesticides should be absent , Dutt took refuge behind the bis provision which says that, in the absence of an alternative , a maximum of 1,000 nanogrammes of pesticides per litre of water is permissible. He claimed that according to the latest (one-time, single sample) test by the cpcb , drinking water adhered to this norm. But the 10-year records of the cpcb show that pesticides in Yamuna water exceed these limits. All these twists and turns were taking place in public glare. At no point did the dwssdu attempt to give full information to the people about the true state of Yamuna water.

The arguments demolished, Mohan admitted in an interview ( The Hindustan Times , May 21, 1997): "We try to meet who standards" - a clear admission that dwssdu is not really able to meet standards. His argument that the water supplied met standards set by the cpcb and the ministry of urban affairs ( mua ) was misleading. cpcb officials told cse that it has not set any norms; nor has the mua. He was also ignorant of the fact that treatment technology cannot be "upgraded" to remove pesticides. The only way out is to prevent pesticides from getting into the water. In India, the ministries of agriculture and health blindly encourage pesticides, which eventually contaminate water.