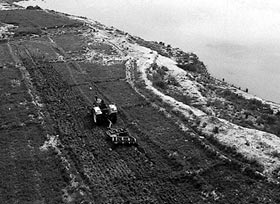 The Delhi Development Authority (dda) has come up with another loophole-infested plan. Its draft Zonal Development Plan (zdp) for the Yamuna suggests major changes in the land use pattern of the riverbed. Outlawing riverbed farming, considered the most legitimate and ecologically useful activity on the riverbed, is one such change. Subsection (1) of section 8 of the Delhi Development Act, 1957, makes mandatory a zdp to protect the riverbed. Originally to be enforced along with the Master Plan for Delhi-2001 (mpd-2001) way back in 1990, the zdp draft is 15 years late.

As per the mpd -2001, the Yamuna riverbed falls under two categories: Zone- p (north of Wazirabad Road up to the northern boundary of the nctd, or National Capital Territory of Delhi) and Zone- o (south of Wazirabad Road up to nctd's southern boundary). The draft zdp has dropped Zone-p; the entire riverbed (9,700 hectares) now falls under Zone-o, subdivided into eight zones (see table: Death knell).

Planning experts claim the draft zdp sounds the death knell for the Yamuna, already under onslaught (see: 'Master Violators', Down To Earth, September 15, 2004). Poonam Prakash, lecturer at the School of Planning and Architecture (spa) , New Delhi, says dda is disregarding legal procedure: "As per section 8 of Delhi Development Act, 1957, large scale modifications in land use, as suggested in this draft zdp, can be made only through the mpd and not a zdp. Besides, the draft neither mentions agriculture, nor details like how much land (in percentage) will be public or semi public in a particular sub-zone."

While the draft zdp doesn't mention farming, communities spread over a large part of the riverbed, in areas like Tejpal Ki Bagichi, Dholakpala and Belagaon, have been farming the riverbed for generations. Some of them even trace their land rights to the pre-Independence era. These communities faced a crisis earlier this year, when the then Union tourism minister Jagmohan initiated a cleanliness drive (see: 'Beautification drive', Down To Earth, May 15, 2004).

Copies of the draft zdp have been sent to the Union ministry of environment and forest, the Central Pollution Control Board, the Yamuna Standing Committee, the National Capital Region Board and the Haryana government for 'official' comments. It has not been made public. It will be updated on the basis of official responses and a copy of the updated plan would be sent to the Union ministry of urban development and poverty alleviation for approval. After its approval, a public notice would be issued, asking the public to file its objections within 90 days.
Yamuna Land Use Legislation Development Development Features Web edition Web edition News News News Great Pacific … Gary Froyland Down to earth Chaos American Institute …
SUPPORT US