"All substances are poisons; the right dose differentiates a poison and a remedy". Modern food regulation is about determining what that right dose is in our daily diet 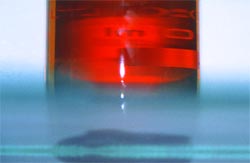 The world awoke to pesticide contamination of food years ago. As early as 1953, a resolution at the World Health Assembly expressed concern about "the increasing use of various chemical substances in food". This inaugurated a process that led, two years later, to the Joint FAO/WHO Expert Committee on Food Additives (JECFA) being formed. JECFA's initial mandate was to review and set safety standards only for all food additives -- it defined additives as "non-nutritive substances added intentionally to food, generally in small quantities to improve its appearance, flavour, texture or storage properties". Later, it's mandate was broadened to include substances "unintentionally" introduced into food, such as pesticide and metal residues.

Then in 1961, this latter function of the JECFA was turned over to another body. The question naturally rises: exactly how much of chlorpyrifos is safe?

Indeed, this matter of variously assessing ADI has the potential to compromise the search for the best, most effective safety limit. Suppose India wished to set a safety limit for malathion, for the sake of public health (till today, it doesn't have ADI for any pesticide). What amount of malathion intake would be harmless?


Regulating pesticides on the ground revolves around a yardstick called the MRL -- or maximum residue level -- of a pesticide in a food commodity. It is a legally enforceable standard, and not a safety norm. It is set for a single pesticide, on all the different food items in which that pesticide's residues are likely to be found.

MRL is determined via supervised field trials of pesticides on crops. The intention is to arrive at practicable ways to minimise the residue in crops. Agricultural scientists work to determine the best agricultural practice and recommend the crops for which a pesticide should be used, and how it should be used.

Globally, if pesticide residue in a food commodity exceeds its MRL, then that food is legally considered adulterated, and penalties can be imposed.


Exposure occurs primarily via what we eat. Therefore, knowing human dietary patterns is extremely crucial to determining exposure. But diets differ across the world. How, then, is exposure estimated?

One could do what the JMPR does, internationally. It uses dietary data prepared by the WHO's Global Environmental Monitoring System-- Food Contamination Monitoring and Assessment Programme (GEMS/Food). GEMS/Food released the first-ever global guidelines to predict dietary intake of pesticides in 1989 (revised in 1997). It divided the world into five regional diets -- Middle Eastern, Far Eastern, African, Latin American, and European -- to estimate what people eat. For this they used the FAO's food balance sheet (a compilation of net food balance in countries).

Such data as the GEMS/Food estimates is believed to be adequate at the international level. But because such estimates are often rough and riddled with uncertainties, it is better if a nation develops its own national dietary model, and so estimate exposure.

Exposure is always calculated for individual pesticides. Regulators know the residue level legally allowed for a pesticide on a food commodity, its MRL. Having figured out how much of that food we eat daily, preferably at the national level, they multiply the two quantities to arrive at the pesticide intake we can be legally exposed to. For instance, Indian MRL for pesticide monocrothophos in rice is 0.025 mg per kg. Indian diet for rice is 209 gms per day. Thus, exposure to this pesticide through rice is 0.005 mg per day.

The quantity arrived at through multiplication is called the TMDI, or theoretical maximum daily intake. TMDI is a first step; but if a government wishes to refine this process, it must improve the dietary model, and calculate exposure based not on the set MRL but on the actual residues found in the food -- the estimated daily intake (EDI). Even better, exposure could be estimated by measuring pesticide intake in cooked food, what is called the Total Diet Study.


This is the step that really determines safety. The level of exposure to a pesticide is compared to that pesticide's ADI. If daily intake is below ADI, then the MRL determined for this process is officially adopted as the national standard. However, if the intake exceeds ADI, all the factors involved in estimating a pesticide's standards are reviewed and reworked. In cases where an ADI cannot be established, MRLs are set at "no detection" levels -- here, no residue is allowed on any food commodity.

Finally, the MRLs are also adjusted to build in exposures from other pathways -- water and air -- always keeping ADI in mind. In no case can total exposure exceed the ADI.


Countries following this process have been able to combat health risks from pesticides. But they are confronted with new challenges like multiple pesticide residues and exposure from pesticides that have common mechanisms for toxicity.

THE UNITED STATES: The US implements this process very stringently. It has assigned clear responsibilities to two nodal agencies -- the USEPA and the US Food and Drug Administration (USFDA). The former is the standard-setting agency. It is entrusted with registering a pesticides for use. Before registration, it follows the above process: it establishes ADI -- what it calls as Chronic Reference Dose -- for that pesticide and sets MRLs (tolerance limits) for residues on food commodities. It makes sure exposure is well below ADI.

USFDA is the enforcing agency. It ensures MRLs are adhered to. It collects samples of food -- raw and processed -- and analyses them for pesticide residues, checking them against the USEPA-set tolerance levels. Samples are collected close to the point of production; also, import samples are collected at the point of entry into US markets. If "illegal" residues are found in either kind of samples, the USFDA invokes various sanctions, such as a seizure or injunction.

As a huge number of pesticides are used in the US, the USFDA uses a multi-residue test method that can detect up to 400 different pesticides in a food commodity.

The process the US follows is very effective It has been able to significantly reduce pesticide exposure. For instance, in 2000 a total of 6,523 food samples were analysed by USFDA -- both domestic and imports. While pesticide residues were found in 40 per cent of domestic samples, almost all -- 99.3 per cent -- had residues below their MRLs. In the imported samples, roughly 4 per cent were found above MRL. Exposure was found to be well within ADIs.

EUROPEAN UNION (EU): The EU process is quite similar to what the US does. Here, the MRL is legally enforceable; non-compliance leads normally to legal proceedings against the supplier. Of late, the EU's Working Group on Pesticide Residues has adopted a policy of "naming and shaming" suppliers and wholesale agencies whose food samples were found excessively contaminated. The most recent annual report of the pesticide residue monitoring programme, published by the Food and Veterinary Office of the European Commission states that of the 46,000 samples of fruits, vegetables and cereals tested by the member countries, only 4 per cent of the samples exceeded MRL, that too by a mere 1.3-9.1 per cent. In the EU, too, the exposure is well within ADI.

OTHER GOOD PRACTICES: In Australia, the ANZFA monitors pesticide residues in foods. According to their dietary exposure report for 2002, the pesticide exposure for different ages and genders were below 16 per cent of the ADIs of all pesticides. All the exposures were found to be well within applicable health standards.

In Canada, too, enforcement works. The Canadian Food Inspection Agency (CFIA) tests thousands of samples annually to ensure MRLs are not exceeded. A four-year study from 1994-1998 tested 44,378 products -- domestic and imported -- and found that 98 per cent of the samples were in compliance. About 93 per cent of processed foods and 75 per cent of fresh samples contained absolutely no residues at all. A five-year study of water wells found that 99.9 per cent of the tested wells met government standards for pesticide residues in water.