Migration trends in Bihar are changing, causing labour shortage in several states. A few studies investigate the reasons and patterns 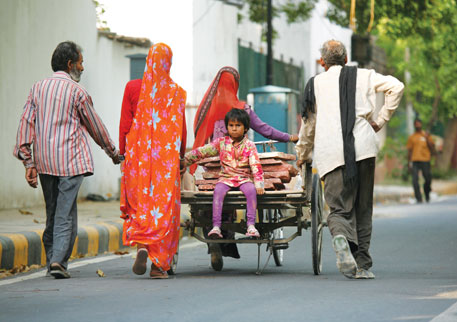 NANDLAL YADAV has no clue about his date or year of birth. All he remembers is that as a child he used to take a train to Punjab along with his father and mother and return to his village in Madhepura in Bihar during the festival of Chhatth. Nandlal calculates that he worked in Punjab for nearly 20 years and then in Delhi for 15 years. “It is for the first time that I am working in Patna,” he says.

Nandlal’s case is not isolated. Media reports state that migration from Bihar has declined, resulting in acute shortage of labourers in Delhi, Punjab, Maharashtra, West Bengal and other states. The issue was first highlighted in 2012 when the Bihar government’s labour department claimed that migration from the state had dropped by 35-40 per cent between 2008 and 2012. The department said that 1.5-2 million labourers who would earlier migrate to other states every year are now finding jobs in Bihar.

Large-scale infrastructure projects in Bihar increased job opportunities for skilled and unskilled labourers and this was the reason behind the decline in migration, the government said. The claim is not without basis. According to the Bihar Development Report 2013-14, the state has seen a growth of 14.15 per cent in infrastructure since 2009. Infrastructure projects such as construction of roads, bridges and buildings have contributed to around 50 per cent of the economic growth in the state, says the state’s Economic Survey 2012-13 (see `Generating jobs').

Though only 11.3 per cent of the state is urbanised, mega bridges and national highways have attracted migrant labourers in large numbers, says Indrajit Roy, research fellow with the Department of International Development, University of Oxford. “Labourers from Bihar were working in cities like Delhi and Gurgaon. The cost of living is high in these cities. When similar infrastructure growth started happening in Bihar, labourers started to migrate within the state,” he says. However, Roy claims that migration has not stopped but become inward rather than outward. He says unskilled labourers from rural Bihar are moving to urban cities such as Patna, Muzaffarpur and Bhagalpur, rather than migrating to other states.

Other factors at play

Roy says that dismal growth of agriculture in Bihar (3.5 per cent during 2012-13) and mechanisation of farming in Punjab have forced Bihari labourers to seek jobs in the construction sector within the state. The point is echoed by D M Diwakar, director of A N Sinha Institute of Social Sciences, Patna. “Earlier, labourers would migrate to Punjab for the entire harvest season—from sowing the seeds to reaping the crop. Now it is limited to the sowing season. Reaping is done using harvesting machines,” says Diwakar. 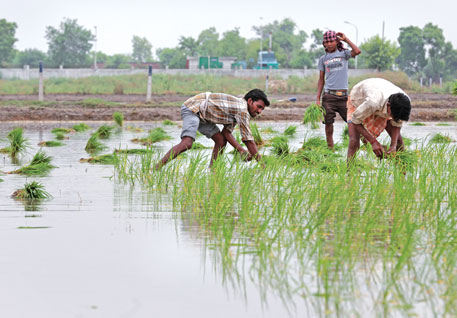 There is another factor behind migration within the state. According to a study by New Delhi-based Institute of Social Sciences, people from lower castes migrate to cities to avoid exploitation and abuse at the hands of the higher castes. The study, titled “Why I left my village: A study on migration from rural Bihar”, was published in 2012.

The decline in the number of migrant farm labourers to Punjab does not mean that migration from Bihar has gone down. It has only shifted from the farming sector to the industrial sector, says a report by Girish Kumar and PranabBanerji from New Delhi-based Indian Institute of Public Administration. It claims 4.42 million people from Bihar migrate every year to various states of India and the migration has actually gone up. The research, titled “A study of Bihari migrant labourers: Incidence, Causes and Remedies”, says the preferred destinations of Bihari workers have shifted from Punjab to industrialised states such as Delhi, Maharashtra and Gujarat. It claims Bihari labourers who now migrate to Punjab prefer industrial towns such as Ludhiana and Jalandhar rather than agricultural towns. The research was conducted in 2009-10.

There are researchers who say migration trends are not so simple to explain. Diwakar argues that 11.3 per cent of urbanised areas are not enough to provide jobs to 5 million migrant workers. Apart from this, road construction in Bihar is mostly being done by global firms that use machines, he says.

Sanjay Kumar, secretary in the state’s labour department, does not have a clear answer on the state of migration. When asked if the number of migrant labourers from Bihar has come down or if the state is witnessing inward migration, he replied, “It’s tough to say. In Bihar, we are still battling with primary data. There had been many researches on migration in the state but they are all snapshots of a cluster of districts.” By “primary data” Kumar means that unskilled labourers like Nandlal need a birth certificate and an address proof to make them part of official surveys. Government and researchers are still waiting for National Sample Survey and Census 2011 data on migration to better understand trends.