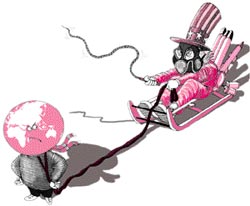 Despite being at the receiving end of the post-9/11 anthrax attacks, the us is drifting away from the convention that seeks to ban biological weapons. On top of it, Washington has readied a plan for vaccinating us troops against smallpox and enhancing its biodefence infrastructure. Against this backdrop, the country's ultimatum to Iraq to "terminate its offensive biological weapons programme..." or face war appears hypocritical.

It was this stand as well as a paradoxical attempt by the us to block new means for verifying compliance that led to an abrupt suspension of the Fifth Review Conference (rc) of the Biological Weapons Convention (bwc) on December 7, 2001. Though the rescheduled fifth rc was held in November this year in Geneva, the meeting could achieve little with the us demanding that it be limited to a "very short" revolving-door exercise.
Earlier, in September 2002, the us had circulated its "talking points" to western allies. As per these, if the member states tried to address any issue besides scheduling another conference in 2006, the us would publicly name more countries which it believes are covertly developing bioweapons.

Last November, us undersecretary of state for arms control and international security John Bolton had listed out Iran, Libya, Syria and North Korea (apart from Iraq) as nations that have clandestine biological weapons programmes. Bolton noted that beyond Al Qaeda, the most serious threat was Iraq. No mention was, however, made of seven other nations said to be pursuing similar projects. Significantly, a Pentagon report released in April 2002 identified India, China, Pakistan and Russia as nations suspected to fall into this category. France, Cuba and Egypt are also under the scanner. That Washington is busy shoring up its own biodefence mechanism has been conveniently overlooked.

The us is also to blame for rejecting the protocol negotiated by the Ad Hoc Group (ahg) for seven long years. The ahg was meant to address the issue of verification, which the bwc lacks. In addition to this, it had to provide a legally binding protocol to strengthen the bwc. But the us shot this down essentially on two grounds. Firstly, it contended that the protocol could do little to deter states from violating the bwc. And, secondly, the protocol was perceived to be inadequate to protect the secrets of the us biotech industry and biodefence programmes.

To be sure, Washington did put forward a number of new measures during the fifth rc in 2001 (see box: The US roadmap). The us had then argued that these steps, if adopted and implemented, "will contribute significantly by doing what none of the measures in the draft bwc protocol would do -- control access to dangerous pathogens, deter their misuse, punish those who misuse them and alert states to their risks". Moreover, individually or collectively they would establish "powerful new tools to strengthen the purposes", claimed the us. But these were mostly politically binding commitments, and critics and experts opine that they cannot be enforced effectively.

Going a step further, usa had drawn out direct linkages between the prohibition of biological weapons and the ongoing campaign against terrorism. It emphasised that neither the convention nor the ahg draft protocol was capable of reining in bioterrorism. In this regard, Washington's new National Security Strategy (Bush Plan) appears to be a partial climbdown since it correctly identifies biological weapons as a growing danger. At the same time, it affirms support for bwc compliance and calls for expanded biodefence research.
Straitjacketed by the us' preconditions, the fifth rc ended with the adoption of a watered down final report setting out a fresh approach to combat the proliferation and use of bioweapons.

The agreement stipulates that states which are party to the bwc will meet annually in the lead-up to the next rc in 2006. It has also been decided that a two-week discussion of experts would be held preparatory to each annual meeting. The objective of the entire exercise: promoting "common understanding and effective action" on a range of issues pertinent to strengthening the convention. Each meeting will focus on specific elements (see box: The course charted). Ironically, these topics too are primarily based on the us' November 2001 proposal.

Even as the bwc -- which bans the development, production and stockpiling of biological and toxic weapons -- has entered its 27th year of existence, the adoption of the final report of the fifth rc marks the end of a year-long series of informal negotiations. These parleys were conducted by its president, Tibor Toth of Hungary, who would be the chairperson of the first series of meetings of state parties in 2003.

The sixth rc will appraise the work done at these yearly meetings and finally decide on any future plan of action. But there is a catch. The proposal specifies that any conclusion can be reached only by "consensus". This, in effect, gives the us -- or any other state party -- a "de facto veto" over the possible outcome.


Predictably, the us praised the agreement declaring that it represented a constructive and realistic work programme for the next three years. The Non-Aligned Movement (nam) countries, meanwhile, expressed disappointment that the bwc could not be fortified through the proposed protocol. They also noted that the final report was peppered with ambiguities, and that only a practical approach by the state parties would ensure that headway was made.

In another development, India and some other developing states including Iran, Pakistan and Cuba held out against a 'take it or leave it' plan to keep alive talks on strengthening a global pact against biological weapons. India's ambassador to the Conference on Disarmament, Geneva, Rakesh Sood, reportedly told United Press International during the conference that the measures envisaged in the draft plan were a "modest step". He raised a pertinent point, saying: "It is important to see what these points leave out. There is no concept of a review, even though it is a review conference, and the word negotiation is conspicuously absent."

The Western Group of countries -- particularly Australia -- was satisfied with the outcome, observing that it was qualitatively different from the final products of previous rcs. The group felt that not only did the decision carefully balance the views of all state parties, it also strengthened the effective implementation of the bioweapons convention by establishing a "framework for an ongoing multilateral process".

The Eastern Group states such as Russia exuded cautious optimism, while Joseph Goldblat of Geneva International Peace Research Institute saw, in the meet, a ray of hope: "The draft was the maximum one could achieve at the present moment to keep the convention alive. We have to maintain some talking mechanisms."