Every 10 years, the census of India comes out with a damning statistic: the country's abysmal female-male ratio. As per the 2001 census, there were 933 females for every 1,000 males in the country. In Punjab, there are 790 women for 1,000 males. Some girl children are killed in the womb, others perished as infants, while many women succumb in a desperate bid to have a male child. The lopsided sex ratio further marginalises women. Pressured into serving as fertility machines, women are trafficked illicitly or even shared among brothers and kinsmen. This visual narrative by ruhani kaur looks at some such women in Punjab and Haryana 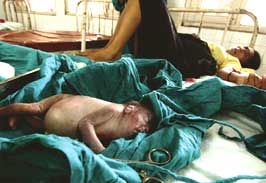 May you be the mother of a hundred sons." That's a popular wedding blessing in many parts of India. It aptly captures a notorious feature of Indian society: son preference. This is accompanied by a cruel aversion for daughters. When the punishment is light, women in Indian live with monstrous inequalities, when the society is at its gruesome worst, girl children are snuffed out in the womb.

In its January 8 issue, the uk- based medical journal The Lancet reported that prenatal selection and selective abortions claim more than 500,000 girl foetuses every year in India. The study claimed to provide the first conclusive links between amniocenteses and India's horrifically skewed sex ratio. Its alarming conclusions actually substantiated what many social scientists and activists have held for long: laws to proscribe sex determination remain woefully inadequate in India.

The origins of offspring sex selection, and the exact numbers of pregnancies involved, have been hotly debated since the early 1990s, when the economist Amartya Sen called attention to the phenomenon of the "missing women". However, many social scientists do agree that historically the practice was linked to the system of hypergamy: families had to marry off their women into a social group above their own. Among the uppermost castes, this was impossible. Equally unthinkable were notions that the rules of hypergamy could be transgressed or that girls could remain unmarried, thus girls in these groups were killed, and boys married females from sub-castes slightly lower than their own. According to sociologist Alice Clark, female infanticide was also a fall out of upper caste households using dowry to augment land holdings: daughters as dowry-takers, were clearly a liability in this scheme of things.

Similar reasons have been ascribed for the lowly status of women -- and female infanticide -- in modern times. In much of India, both the sexual division of labour and the inheritance patterns establish the male as more valuable, because he can earn higher wages and because he inherits property. In fact, if the census figures are anything to go by, women have become even more unwanted in modern India. Consider this. In 1901, India's sex ratio (female/1,000 males) was 972; in 1971, it had declined to 930 and after a small climb in 1981 to 936, the ratio in 1991 went down to 929. After, the 2001 census it stood at 933. According to many social scientists, this deterioration in women's position has stemmed largely from their unequal share in the advantages of medical and social progress.

There are more grounds for concern than may be suggested by the current all-India sex ratio. It hides the fact that there are states in India where the female-male ratio is very much lower than the Indian average. There are, for example, only 790 females for every 1,000 males in prosperous Punjab.

And that's not all. According to demographers Udaya Mishra of the Centre for Development Studies and Mala Ramanathan, Centre for Health Sciences (both in Thiruvananthapuram, Kerala) the two-child policies promoted by various state governments would further distort India's sex ratio -- much like what has happened in China. Mohan Rao of the Centre for Social Medicine and Community Health, Jawaharlal Nehru University, New Delhi, agrees. "There is now more than anecdotal evidence that the two-child norm has contributed to the skewing of the child sex ratio," he contends.

Demographer Ashis Bose sums up the issue aptly, "The famous family planning slogan, Hum do hamare do, mathematically adds up to only three possibilities: that people have two sons, two daughters, or one son and one daughter. Two daughters are usually not acceptable, culturally or economically, because they have to be married off. While one son and one daughter are tolerable, the ideal situation people strive for is two sons."


In their book, Bare Branches: Security Implications of Asia's Surplus Male Population , political scientists, Valerie M Hudson and Andrea M den Boer warn that the spread of sex selection in India -- and China -- is giving rise to a generation of restless young men who will not find mates. "History, biology, and sociology all suggest that these surplus males will generate high levels of crime and social disorder," the authors say. "Even worse," they continue, "is the possibility that the governments of India and China will build up huge armies in order to provide a safety valve for the young men's aggressive energies."

Hudson and den Boer's apocryphal theories have drawn much criticism. Perhaps, rightly so. But as David T Courtwright, a professor of history at the University of North Florida, usa notes, "The basic idea that demography is associated with social destiny...is very powerful." Sociologists S Sudha and S Irudaya Rajan sum up the issue quite aptly: "Shortage of women leads to greater restrictions and control over them."

The increasing intensity of violence against women in all domains of life is ample testimony to this.