As the glaciers recede, the frequency of natural hazards such as floods and cloudbursts will increase 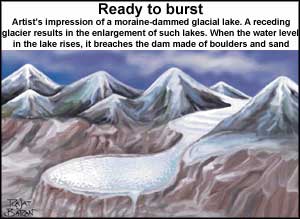 Glaciers , the huge and seemingly sedate rivers of ice, are the source of life and, ironically, death too. These masses not only add to the serene and pristine beauty of the higher reaches of the Himalaya, they are also the source of north Indian rivers. Thus, with global warming on the rise and many glaciers retreating at an alarming rate, it is time to assess the potential of the glaciers, which are one of the least studied natural phenomena in India.

The rather crowded mountain regions of north India are vulnerable to the consequences of receding glaciers. "Cloudbursts, avalanches, landslides, glacial lake outburst floods ( glof s), mudflows and earthquakes. These natural hazards could increase in frequency," says Bahadur. "If a glof occurs it can change the course of a river which can rise more than 10 feet and cause untold misery to all life forms in the Himalayan region."

The thinning and retreat of Himalayan glaciers is resulting in the formation of new moraine-dammed lakes and the enlargement of existing ones. Small ponds on the surface of lower glacier tongues are also increasing in size and coalescing. The retraction of the glaciers leads to influx of huge quantities of water into glacier lakes. When the water level in the glacial lake rises, it breaches the dam formed of ice, boulders and sand (see diagram: Ready to burst ) .

Since 1956, a new lake has been noticed on the lower part of the Imja glacier below Lhotse. It has grown to about 50 hectares. There are now at least 50 ice-dammed and moraine-dammed lakes in the Dudh Kosi and Arun catchment area in eastern Nepal-southeastern Xizang in China. But while little is known about the frequency of collapse of these dams, their sheer number is impressive. A study of the Dig Tsho glof gives an idea of the extent of damage caused by such a disaster.

Several Himalayan glaciers are retreating, thus increasing the chances of glof s. Such hazards will, perhaps, hit India the hardest. Their effect on a ancient civilisation formed around the Indus and the Gangetic basins is anybody's guess. Vikram Chandra Thakur, wihg director, predicts that if the Himalayan glaciers continue to retreat at their current pace over the next 25 years, the Ganges will swell and then -- with the most vulnerable portions of the glaciers gone -- touch perilously low levels in summer.

Most of the major north Indian cities have sprung up around rivers. The Ganga, mother of all rivers and venerated by Hindus, flows through many pilgrimage sites such as Rishikesh, Varanasi and Allahabad, also some of the most populated areas in the entire country. Agriculture is the primary source of income for the population living in these areas. "Since socio-ecology in these areas is directly linked to water, it is difficult to imagine the impact of seasonal or no rivers at all. One thing is for sure, it will be an ecological disaster," says Hasnain.

The impact on dams is also noteworthy. Since the Himalayan glaciers carry the maximum amount of silt and sediment (compared to glaciers elsewhere), "more water may mean siltation of dams. The lifespan of dams may also be shortened considerably. There is also a danger of breaching of dams in case of cloudbursts and glof s", says Bahadur.

Gergan notes that projects such as the massive Tehri Dam, under construction on the Bhagirathi river, the main tributary of the Ganga in Uttar Pradesh, are not taking into account glacier-induced fluctuations in the river's flow. "More glacial melting means much higher silt loads, which reduce the life of dams and reservoirs," he says. "This is exactly what is happening to the Bhakra-Nangal dam in the Punjab which receives meltwater from several glaciers," says Hasnain.

Melting of glaciers will also affect the diverse flora and fauna of the mountain region. Says A R K Sastry, director, Biodiveristy Hotspot Conservation Programme, Worldwide Fund for Nature, "As the glaciers, recede there will be a change in the moisture level of the region which could lead to hydrological imbalance. This could pose a potential danger to the high altitude wetlands that support various life forms." However, very little study has been done on the impact of receding glaciers on the flora and fauna of the Himalaya.

"In India, there is very poor database on glaciers. And whatever exists is in the form of snapshots. On the other hand, excellent studies have been conducted on Nepal's glaciers. So we presume their conclusions would also be applicable for glaciers in our country, particularly those in Sikkim, Garhwal and Kumaon Himalaya," says Hasnain.

Bahadur calls for an integrated study of the country's glaciated regions and projects in cooperation with neighbouring countries. "There is a need to monitor high-altitude glaciated regions to understand the natural processes and the magnitude of anticipated natural hazards for relief measures," he says.

Suitable blends of traditional and modern concepts are needed to contain damage to glaciers and to ensure more harmonious environmental conditions are created in the mountains. "This becomes even more important in the light of global warming due to the greenhouse effect and scientific knowledge of glacier-climate relationship is insufficient to address the effect and consequences of these climate changes in the high terrain," says Bahadur.