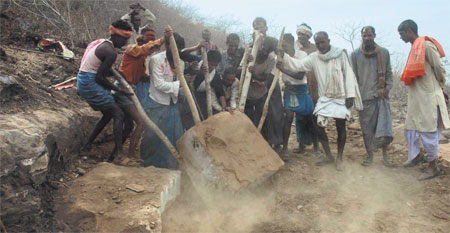 It seemed an usual evening gathering around the village well in Barwan Kala, full of banter and bonhomie, till matters got serious. One young man had just said, “Mohar Singh has two wives and no kids. He married first when he was 16 and tied the knot again when he was 20 years.” There was immediate outrage.

Mohar Singh got up from a charpoy and shouted: “I did not get a girl because there is no road to our village. You too will never get a girl. So stop making fun of bachelors.” A fit of coughing put an end to his diatribe. An elderly comrade put his arm around him. The offendor turned red and offered apologies. Someone whistled a Hindi film song in an obvious attempt to ease the tension. But the evening was spoilt.

Seeing me walking towards the charpoy, Mohar Singh’s friend got up and introduced himself as Basudev Singh. He took me to corner and whispered, “Mohar Singh is 75, one of the 110 septuagenarian bachelors in our village.” Basudev Singh couldn’t keep his voice low for long. “I am 60 and unmarried. Ours is a village of bachelors. People do not want to marry their daughter here. ”

It wasn’t difficult to understand why. Barwan Kala is on Kaimur hills in Bihar’s Bhabua district. I had to trek three hours and then walk five kilometres through the forest to reach the village. There were a couple of cattle carcasses on the way.

“There is no electricity, post office or hospital in our village. There are four tubewells. But they dry up in the summers,” Mohar Singh joined the conversation. “Sometimes a journalist comes, promises to bring our problems to light and that is the end of it. You will be no different,” someone shouted.

Basudev Singh said this was Ram Prasad, 65, a bachelor. I made acquaintance. Ram Prasad spoke slowly, stopping to make sure I heard him well, smiling whenever our eyes met and sometimes breaking into an inexplicable guffaw. “Things will change here very soon. We are cutting the mountain to make a road so that the youth here can marry and those ailing can be taken to hospital,” he said.

The road has become a thorny issue for the people of Barwan Kala. Ramchandra Yadav who got elected from Kaimur on a Bahujan Samaj Party ticket had promised the villagers he will remain a bachelor till the village of 3,000 people is connected with the world. “But the MLA broke his promise three months after winning the elections.

We campaigned from dawn to dusk. But none of us went to attend his wedding. The womenfolk, though, were eager,” Ram Dayal Singh, who introduced himself as a former mukhiya of the village, said. His son will suffer the same fate as ours, someone in the crowd said, only to be shut down redfaced by the ever-jovial Ram Prasad: “What if the MLA is blessed with a daughter?”

Angry over the betrayal, the villagers called for a meeting. It was decided they will work to construct the road through the rocky hill and mountain. From January to March, they broke rocks and levelled the rocky grounds. “We have levelled a four km stretch,” Ram Dayal Singh announced with a smile. It was all too brief. “The forest department is our enemy now. Forest officials have sent the police, threatening us to stop work on the road. They claim it’s protected forestland and there can be no construction.

The department has lodged an FIR against 12 of us,” he said. At Kaimur, divisional forest officer R K Ram said his hands were tied. “A Supreme Court ruling bars any construction work in the protected forest,” he said. A senior district official, who did not want to be named, said this is unnecessary fuss. “I cannot understand why the forest department cannot take initiative to make a road. Why do they expect to be spoon fed,” he said.

Kaimur’s MLA thinks the district administration is equally to blame. “I wrote to both district administration and forest department. But they kept passing the buck. Meanwhile, my father fixed my marriage,” Ramchandra Yadav said. The MLA claiming not betraying Barwan Kala does not pass muster with the villagers. “Oh come on. Doesn’t he know womenfolk of our village rarely climb down the hill. There are no stairs and one has to step carefully on the rocks. A loose foot grip or a fall means instant death,” the ex-mukhiya Ram Dayal Singh said.

He and Ram Prasad came to bid me goodbye. “Things will be better next time you are here. Like Lord Hanuman we will cut though the mountains,” Ram Prasad said flashing his now familiar smile.