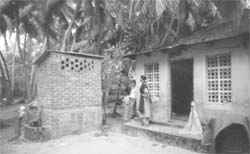 A new cost-effective sanitation technology is putting the lid on conventional human excreta disposal methods. Six villages in Kerala have already witnessed the benefits of this project. Pulluvila, Adimalathura, Pallam, Pozhiyoor, Valiathura and Anjengo on the outskirts of Trivandrum, now have new technology that promises a cleaner and healthier environment.

A brainchild of Paul Calvert, an environmental sanitation expert, the project has introduced dry compost toilets with evaporative plant beds. Says Calvert, "There is no longer open defecation and wastes are not polluting either the groundwater or the village environment." The project was flagged off with compost toilets in 150 homes. The Programme for Community Organisation in Trivandrum is executing the project with funding from uk -based Intermediate Technology and Thrasher Foundation, usa .

Lack of sanitation means unhealthy disposal of excreta which could contaminate both food and water. Widely-used conventional technologies have dealt with sanitation as a disposal problem only. Therefore, the need of the hour is an alternative technology which values human waste as a resource and also conserves our fast-depleting water resources.

In the new millennium, almost 67.3 per cent of the world's population will have no access to sanitation. In India, almost 70 per cent of the people have been facing this problem since 1994.

The toilet has a raised slab with a defecating hole over two waterproof vaults. There is a funnel for channeling out urine to an evaporative plant bed outside the toilet. These toilets are easy to maintain. Says Mary, a local resident, "I only need to sprinkle a little ashes into the defecating hole and then put the cover. Earlier when the concept was new, we faced problems as we used the washing hole as a defecating hole. This led to leakages in the chamber. But now with the help of project workers we are confident of using these toilets."

The system owes its name to compost, a black, dry powder of decomposed matter, that can be used in plantations. And the good news is there is no odour. This compost is obtained from the vault after the toilet has been used for 12-18 months.

This new low-cost water conservation technology is suitable for areas with a high-water table and water-logging problems. At a cost of about Rs 3,500-4,500 per compost toilet, the technology has enough potential to be popularised elsewhere.

The shoreline near six villages in Kerala are used for defecation. In the project area, almost 80 per cent of the homes did not have proper sanitation facilities and more than 50 per cent of the population used contaminated community wells for cooking leading to the spread of diseases.

These new toilets also tackle two other problems found in the Kerala countryside - water contamination and outbreak of diseases. Anthoniyamma, a local resident says, "We can never dream of a continuous and safe water supply. Therefore, we have to take care of our own water supplies, especially the wells. This is very difficult." These toilets save about 1 lakh litres of water per family per year. In addition there will be no contamination of water by human wastes.

According to Calvert, the opening of the vault of the first toilet was an acid test. "For each brick that we removed, onlookers were convinced that we were opening the gates of hell but they approached once they found nothing unpleasant," says Calvert.

There is now interest and recognition from the Trivandrum Municipal Corporation. Mayor Sivan Kutty offered funds for building 24 compost toilets. Organisations like exnora in Chennai and the Programme for Community Organisation in Trivandrum, have also come forward to start similar projects in surrounding areas. Demonstration projects in other parts of the country are also underway.