Most eco-friendly claims of Indira Paryavaran Bhawan are hogwash 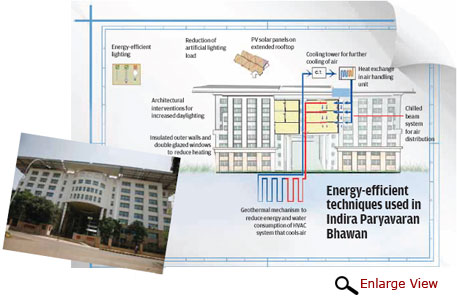 In 2009 when the Union Ministry of Environment and Forests (MoEF) decided to get new office space for its 600-odd officials, the then minister Jairam Ramesh envisaged it to be a trendsetter in environment-friendly buildings in the country. Christened Indira Paryavaran Bhawan (IPB), the swanky office building underwent multiple delays and massive cost overrun before it was hurriedly inaugurated by former prime minister Manmohan Singh in February—a month ahead of the Election Commission’s announcement of the 2014 general elections. But IPB has not quite caught the attention of the nation as Ramesh had expected. Although it has set a precedent in rooftop solar power generation, it fails to address the larger issues of resource efficiency and affordability, which are the key features of an eco-friendly building.

But before analysing its efficiency, let’s first understand how the building manages its energy requirement. In a typical commercial building, 80 per cent of the energy used goes to lighting and heating, ventilation and air-conditioning (HVAC). IPB employs a mix of architectural interventions with super-efficient technologies to reduce these energy loads. To reduce exposure to direct heat, the building has east-west orientation and its outer walls are padded with heat reflecting terrace tiles and rock wool for insulation. Glazing, or wall to window ratio, is restricted to 17 per cent. Windows are fitted with double-glazed units that allow natural illumination, not heat. To reduce dependence on air- conditioning, the building has open atrium and lobbies. Only 38 per cent of the building is air-conditioned by using advanced HVAC technology (this includes screw chillers, variable frequency drives and chilled beams). This HVAC system consumes two-thirds less energy. MoEF went against the comfort standards of National Building Code (NBC), which is 23oC-26oC forv summer and 21oC-23oC for winter, and fixed the setpoint temperature of HVAC at 26±1oC for summer and 19±1oC for winter. Studies show that every degree rise or drop in setpoint temperature saves 3-5 per cent of energy.

To save energy spent on lighting, 75 per cent of the office space is designed to be day-lit. Further, interiors are designed in a way that every square metre can be illuminated by 5Watt, instead of the standard 11Watt. Energy efficient lighting systems and lux-level sensors (that optimise operation of lighting by sensing presence of people and daylight in the room) further help reduce energy use. Since office appliances account for 20 per cent of the energy consumed, IPB uses only the ones rated Five-Star (most energy efficient) by the Bureau of Energy Efficiency (BEE). “IPB’s energy consumption will remain within projection only if officials do not use personal printers, fax and coffee machines,” warns Deependra Prashad, independent green building consultant for IPB.

The goal of IPB is to be energy net-zero, or to generate as much electricity as it consumes. The Central Public Works Department (CPWD), which has designed IPB, claims that the building may consume 1.42 million kWh a year. To become net-zero, it has installed solar photovoltaic panels on its 6,000 sq m extended rooftop, which is expected to generate 1.49 million kWh a year. Though MoEF is yet to move into the building, IPB has generated 0.22 million kWh between November 2013 and February 2014. IPB does not directly use the solar energy it generates. It feeds the energy into the grid and uses grid electricity. This is to avoid storing solar energy that requires hazardous and expensive battery banks and massive floor space. Since the tariff at which the government buys solar power is higher than the rate at which it sells electricity for commercial use, IPB’s solar system will pay for itself and make money for MoEF in near future. “IPB is the first building-level renewable project selling energy to the government. It demonstrates that rooftop solar is profitable,” says Prashad. “The new government may upgrade the national grid to integrate more such projects.”

But green building is a bigger dominion than rooftop solar, and IPB does not seem to be efficient in resource utilisation. Recently, IPB received a provisional Five-Star from Green Rating for Integrated Habitat Assessment (GRIHA), which says IPB’s energy performance index (EPI) is 39.28 kWh/sqm/year. But GRIHA does not consider energy used by appliances. While GRIHA is conceived by Delhi non-profit The Energy Research Institute, BEE has its own set of standards for rating buildings. Down To Earth has learned that going by BEE standard, EPI of IPB will be 67 kWh/sqm/year, which warrants an unimpressive Two-Star. This further suggests that the building is energy inefficient.

Where else it falters

CPWD claims to have reduced IPB’s water consumption to 50 per cent by using low discharge water fixtures, plants that use less water in landscaping, recycling wastewater and using geothermal mechanism for cooling (hot water coming out of HVAC system is pumped into a network of pipes placed deep inside the earth. The cooled water is then reused in the HVAC system). According to IPB’s environment impact assessment, its water footprint is 42 kilo litres a day. A back-of- the-envelope calculation shows the building will consume 70 litres per capita daily (lpcd). NBC’s water consumption standard for office building is 45 lpcd on an average. There is no clarity on IPB’s claims of rainwater harvesting. MoEF says IPB cannot recharge groundwater as water table in the area is high. In that case IPB could have a rainwater storage tank like other buildings in the area.

Despite a Metro station 300 metres away, IPB has a three-storey energy-intensive robotic stacked parking in the basement to accommodate 344 cars.This is against the grain of sustainable mobility. Parking acts as a magnet for traffic while the need of the day is to restrict private vehicles to promote public transport.

IPB has been built at an expense of Rs 201 crore. This is 54 per cent above MoEF’s initial estimate for IPB and 82 per cent costlier than the new office of Haryana Energy Development Agency in Panchkula, which is also a GRIHA Five-Star. Such exorbitant cost of IPB only adds to the myth that green buildings are expensive.

Green buildings are expected to be prudent and efficient with resource utilisation, not just energy generation.