When poets wrote for Down To Earth

The Invisible Mountain
By J Swaminathan

Arms outstretched on the edge of the cliffs
Stand a few trees
Ready to fly away with the clouds.
They say these deodars once
Kissed the Kokunala
And embraced the skies so tight
That the stars were startled
By the village glow-worms every night.

Now when the corn touches gold
A scoundrel bear
Swoops down the slopes
Blazing destruction
All our pistols and double-barrelled guns
Fail to stop him.
Maharaj, where is that old rogue this year?

The mountain before you
Hides another from view.
Ascend the slopes to Rana Ki Kot
And look across
But the mountain will not appear
It is drowned in mist
To float up staid
Unmoved.

Look
The slate on the watermill still shimmers
The corn spreads in yellow sheets
The cowherds laze around, watching
Across the valleys the cattle are grazing
You say the mountain
Shrouded in mist
Would reappear.

But see how clear is the sky
No mist, no fog
No wisp of a cloud stuck on a cliff-top
That mountain is not visible, Maharaj.

You cannot see on the mountain
The gujjar camp
With long-waisted women dressed in black
And the wild dogs with eyes of burning coal.

That mountain is not visible, Maharaj
Its silence hides behind
The mountain before you
A wounded deer waiting to spring.

J Swaminathan was a painter and poet. This poem, published in Down To Earth (December 16-31, 1992), was translated from the original Hindi by Amit Mitra

Truth is what my father taught me
By Jayanta Mahapatra

Truth is what once my father taught me
but that was years and ages back.
Today it gives me a cynical look from the ozone hole.
Its voice has lost its music, choking on chlorofluorocarbons,
it is just a voice that has airlessness to cross.

What do I care about leaders such as Bush or Major?
Or the nuclear power plant in Iowa I visited once,
or the deep, fiery throat of NASA?
Or European autobahns, or the ad for cat food which says:
Shouldn't your cat eat like a hero too?
The stomach of hopes begins to empty itself
when we stop to rest and think.
Nothing but green bile comes up even at a domestic summit.

Nothing but the inexhaustible delirium
of a solitude that runs away as we continue to stalk it.

God really knows how to fill up hungry bellies
In Africa and Asia with the silence of his voice.
God knows, and so he has gone on and on,
like the truth about those questions
he has never answered and I so want to forget.

Jayanata Mahapatra is the recipient of Sahitya Akademi award and Padma Shri. This poem, exclusive to Down To Earth, was published in August 1-15, 1992 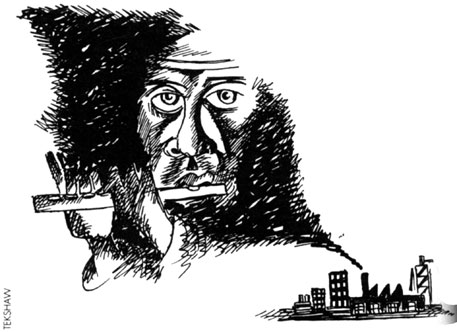