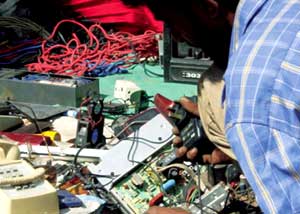 In a dingy shed full of fumes and acid baths, men ferret for the precious yellow metal -- yes, gold -- in discarded computers. Gold is used to coat parts called connectors, which are first manually plucked out from the printed circuit boards ( pcb s) in a neighbouring shed of the run-down, cluttered locality of Gowripalya in Bangalore, the Information Technology ( it) hub of the country. A mixture of hydrochloric and nitric acids, called aqua regia, is used to extract the gold from the connectors. One computer yields about half a gramme of gold. At the end of the day's work, the leftover aqua regia is simply dumped in open areas.

Gowripalya has almost 25 such units that deal exclusively with computer waste -- which is growing with every year. In about ten years' time, the city's cyber waste will annually yield, among others, 7,500 tonnes of plastic, 270 tonnes of cadmium and 75 tonnes of mercury, projects a recent study conducted by the Karnataka State Pollution Control Board's (kspcb) Environmental Management and Policy Research Institute (empri). "Recycling itself can be useful. In fact, it would be easier to get gold from old computers rather than from Kolar gold fields but the unscientific methods (used) pose environment and health hazards," says Bakul Rao of empri.

e-waste trade thrives in several parts of the city and has come to support entire communities. In the heart of Bangalore, behind Shivaji Nagar, is another cluster of recycling units involved in the extraction of gold. The recyclers are often unmindful of the methods used and their environmental fallout.

A computer complete with monitor, keyboard, mouse and the central processing unit weighs about 32 kilogramme. But with no scientific system of recycling in place, end-of-life computers land with backyard vendors.

A study conducted in Bangalore by Saahas , a non-governmental organisation, under the Hazardous Waste Management Study -- Karnataka Project, found an auction dealer on an average purchased waste worth Rs 15,000-20,000 every three months from software companies and those engaged in business process outsourcing, or bpos. The gold-plated components are ripped off and sold to gold recyclers for up to Rs 1,200 per kg. The rest of the pcbs are in turn sold for around Rs 10/kg to other low-end recyclers for retrieval of other metals and plastic (see table: Scrap economics). "Scrap dealers purchase the waste first from companies through auctions, and then it is sold to recyclers. The returns of investment in this waste, however, is a big gamble where sometimes the investment could double or sometimes bring in losses," says Wilma Rodrigues of Saahas who conducted the study.

A component in high demand is the cathode ray tube (crt), also called the picture tube, which is used in computer monitors. crt recyclers throng the SP Road in the city and make a good living by 'regunning' the tubes and using them in television sets. They sell the cheapest television sets in the city: a 14-inch (36 centimetre) tv here costs just Rs 3,700 and a 21-inch (53 cm) tv is available for Rs 5,000. Recyclers involved in regunning purchase crts from computer scrap dealers for Rs 600-800 per tube. The regunning process involves heating the tube in an oven after which the tip of the tube is cut. The electronic gun is removed and a new one put in its place. The regunned tubes are then sold to television manufacturers for around Rs 1,500-2,000. Saahas found that almost 25,000 crts are recycled in this manner in Bangalore every year.

A visit to the Sunday bazaar in KR Market in the heart of the city gives an idea of the e-waste the city generates --- one can see pile after pile of chips and assorted bits and pieces of computers. The Saahas study has found that the bulk of the e-waste is contributed by it companies which have a high obsolescence rate for computers. As the it segment tries to keep pace with every new development in technology, the older computers are junked and the recycling market gets flooded with fresh stocks of electronic memorabilia -- stripped, pounded and extracted.


In Bangalore, the 1,322 software companies that come under the Software Technology Park of India and 36 hardware manufacturers can import computers duty-free as export-oriented units are exempt from basic customs duty. But these companies have to follow one stipulation: even on reaching end-of-life, the imported computers remain under a customs bond and cannot be sold.

The companies have three options available to them: they can donate the obsolete computers to charitable educational institutions or hospitals; they can destroy them to ensure the machines become unfit for resale or get them released from the customs bond by paying duty.

Most companies here insist that their first preference is donation. But several schools who received such computers say some of these machines are in no condition to be used. They finally end up as scrap. Says Bakul Rao of empri, "While the growth of computers is around 30 per cent, it companies here have no strategy to deal with e-waste except for donating computers."

According to the study conducted by Saahas , the it companies, the bpo segment and hardware manufacturers collectively provide employment to around 1,60,000 people. The turnover of computers is the highest in the software sector with its computer strength (desktops and laptops) estimated at 1,00,000. The annual obsolescence rate is said to be around 30 per cent. Thus, this sector alone discards around 30,000 computers every year. In addition, the annual contribution from the bpo segment is estimated at 6,000-10,000 computers. The bpo / it segment (with a total of 41companies in the year 2003) is the second largest generator of e-waste. Its computer strength is estimated at 60,000 units. Its obsolescence rate, however, is much lower than the it industry's as the shelf life of computers and peripherals can be stretched to 5-7 years, according to the Saahas study.

While most companies donate a chunk of their computers and dispose the rest with backyard operators, some show more concern. For instance, computer manufacturer Hewlett and Packard (hp) has an arrangement with a recycling company in Singapore for its end-of-life electronic waste. "From cartridges to entire printers, all discarded parts are collected from various points at hp and sent to the recyclers. It works to be cost effective for us as there we recover from contributing," says P Ravindranath, director -- strategic development, hp. Computer giant ibm, however, stores its e-waste to prevent it from ending in the informal channel. It is waiting for the government to come out with a comprehensive policy on e-waste disposal.


As the problem of e-waste continues to grow bigger, the need to evolve clean means of disposal becomes more urgent. Eparisara, a private company, is working on scientific recycling of e-waste. It is trying to develop techniques to recover and recycle metals, plastics and glass. Its small research unit has got a license from kspcb to start full-fledged operations. A plant with a capacity of 10 tonnes per day is coming up in the outskirts of the city, but Eparisara is apprehensive about whether it will get enough material for recycling to make the unit viable. The bulk of e-waste still travels to the scrap yards and the backroom recyclers.
Toxic Wastes Electronics Computers Bangalore India Waste Recycling Waste Recycling NGO Features Science & Technology Rainfall Monsoons Migration Migration Lakes Green House Gases Drought Climate Science Climate Impacts Climate Change Asia Africa
SUPPORT US