Fast-forward to the past

Only a few villages stand testimony to the success of traditional water harvesting methods in tribal areas of Singhbhum. A report by Binayak Das

Fast-forward to the past 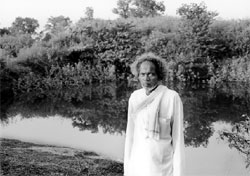 The village Pokhlabeda in Patamda block near Jamshedpur is unlike most other villages in the tribal population-dominated districts of Singhbhum today. Fifteen years back, farmers here considered themselves fortunate if they harvested one healthy crop a year. Today, most farmers manage about three crops a year, and some households even harvest four to five crops a year. This seemingly miraculous transformation is the result of a process of rediscovery of traditional water harvesting methods in the region.

Amarjeet Sinha was the deputy development commissioner (ddc) of the Singhbhum district during the late 1980s. This was the time when the government had set in motion a rather extensive well construction programme. Sinha observed that the traditional tribal method of harvesting water through tanks built for the purpose worked better than the government's programme. "I decided that the department needs to learn from the local community, and the government programme should shift focus to construction of tanks."

From 1987-1989, over 3,000 tanks have been constructed in Jamshedpur and Chaibasa, in one of the largest experiments with water harvesting in the 1980s. The tribals of Singhbhum looked on this programme as their own, and participated wholeheartedly. With time, Sinha moved out, and the programme lost the zeal it started out with. About two decades have gone by since the programme was set in motion. Most of these tanks are silted up, and no one bothers with cleaning them up or maintaining them.

Villagers claim the government does not have the money for maintenance, and they are too poor to spend the money themselves. Of the 3,000-odd tanks that were constructed, only about a 1,000 are in working condition today. At the time that Sinha had initially started his work in the villages of Singhbhum, he found a friend and co-worker in Nimai Singh Sardar of Patamda. Nimai, who had set in motion the Jungle Bachao Andolan (save the jungle movement) in Singhbhum, is the man behind Pokhlabeda's prosperity today. Expressing anguish at the state of the tanks today, Nimai says, "If some of the tanks are in working condition, all of them could have been. It depends on who is taking care of the tanks."
The Patamda block, which Pokhlabeda is part of, has about 200 working tanks. Nimai's efforts tell in the prosperity of the village. "About 50 per cent of the tanks in Patamda still survive," says Nimai. And most of the low-lying tanks in the area have water. For the past decade, the people of the villages in Patamda have cleaned the tanks through shramdaan (voluntary work). "During the month of February and March, we clean the tanks," says Din Bandhu Singh from the village.

These tank maintenance efforts have not been planned in isolation. Patamda has seen massive afforestation activities, both in the villages and on the perimeters of the tanks. "This has led to reduced soil erosion, and consequently a good harvest of paddy, wheat and pulses every year," says Din Bandhu. Nimai adds, "Patamda has also become famous for its vegetables all across the region." Apart from providing water for agriculture, the tanks are also a big source of aquaculture.

Those connected with the tank revival campaign now take time off to create awareness on other issues. They have formed the Bharat Jan Andolan that involves itself in social activities across 40 villages of the block. Bhakti Ranjan Singh, secretary of the organisation, says, "We focus on creating awareness regarding traditional systems among the disadvantaged tribes."

The Bharat Jan Andolan is worried about the people's disinterest in tanks. "Big dams, like the Demna, have affected the role of water harvesting here," says Nimai. Most tanks in the region are dying a slow death. "We do not get any government support at all," says Bhakti Ranjan. Villagers expect that 80 per cent of the tanks can be revived if the government provides assistance. And they continue to sorely feel Sinha's absence. Nimai says, "He had a knack for reaching out to the people." The present ddc, villagers say, has never even visited them.