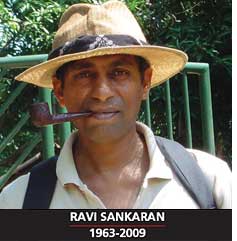 An administrator's hat rarely fits a field biologist well. Ravi Sankaran was trained to slog it out in the field. He was a quintessential man of the field by temperament. But he brought as much zest to board rooms of the Salim Ali Centre for Ornithology and Natural History (sacon). Classrooms or machan, fundraising meets or workshops, Ravi was full of curiosity, fun and laughter. A researcher, teacher, mentor and director of sacon for the last seven months of his life--a life cut short in its prime, on January 17, by a cardiac arrest. Ravi was 45.

Ravi's affinity for the field developed during a stint at the Bombay Natural History Society (bnhs) in the late 1980s. The then curator of the society J C Daniel took the young graduate student under his wing. Touring different parts of the country, he developed a commitment for rare and endangered bird species. The young field biologist's research on the lesser florican in western India was pioneering. It provided the basic framework for conservation of this endangered species, and of other species and habitats he studied subsequently. In 1991, the University of Bombay awarded Ravi a PhD for his thesis on the floricans.

Ravi joined sacon the following year. It was also the beginning of another engagement: with endangered bird species of Andaman and Nicobar Islands. One of his earliest studies in the islands was on the Nicobar megapode. Popularly known as thermometer bird, this stout pheasant-like bird is found in forests, around 100 metres of the Nicobar beach. Ravi's research showed that it was endangered. The decline was acute in many islands where the coastal forests were destroyed or disturbed and the species threatened.

The 2004 tsunami had just abated when Ravi headed to the Andamans to investigate the tilt and the turmoil. The thermometer bird was also calling. Ravi's studies showed a 70 per cent fall in the bird's population.

The thermometer bird was not his sole preoccupation in the Andamans. One of his many important projects was on the edible-nest swiftlet. The population of this cave dwelling bird, which makes its nest from its saliva, was on the wane. The bird's nests were being indiscriminately picked for food--chiefly for bird nest soup. It was a great challenge, but Ravi as usual was willing to push boundaries. He and his team members sat day and night in dark caves to observe the birds. They decided to find forest parents for the swiftlet chicks. Artificial nests were made and the white-bellied swiftlets were brought to foster the chicks.

It was remarkable: chicks of the edible-nest Swiftlet foster-reared by its white-bellied cousins have now come back to nest at their artificial homes. The work on the swiftlet provided crucial insights that will go a long way towards the conservation of this species.

In 2000 the ministry of environment decided to list the edible-nest swiftlet as a Schedule I species under the Wildlife Protection Act--harvesting it or destroying its habitat was now illegal. Ravi believed this was recipe for disaster. He had thrown in his lot with developing community-based conservation efforts including su stainable harvesting of the swiftlet's nests. Ravi made numerous trips to Delhi to persuade the ministry to change the listing. His work seems to have moved the officials: the edible-nest swiftlet is on the verge of being removed from Schedule I .

Around 2006 Ravi started getting interested in community-based conservation in Nagaland. In 2007, he and colleagues at sacon initiated a programme to integrate conservation with livelihood options.

When the monsoons kept him away from the Andamans, Ravi would head to arid Gujarat or Rajasthan. Agree or disagree with him: it was impossible to ignore him. To many of his colleagues at sacon-- and I am sure elsewhere as well--Ravi was larger than life. He could connect with a range of people. He hated theorizing, but respected theorists. A city-bred conservationist, he could hold his own with a local knowledgeable. His booming voice holding forth on a range of issues, his many avatars, unkempt, or well-dressed, with or without a pony tail and the various fashions of moustache, his pipe which he would constantly re-light, his impatience--all contributed to his charm.

On January 17, when he suffered the fatal heart attack, Ravi was preparing to celebrate the fifth birthday of his daughter Yamini.