While cranes are regularly hunted in parts of Pakistan, villagers in Rajasthan are doing their best to protect these endangered species 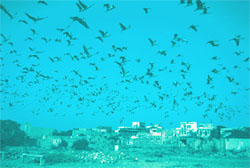 Their flights to the distant lands turn into flights of death as the white, long-limbed, stately birds make their way from the harsh climes of Siberia to the tropical lands of India. The Siberian crane ( Grus leucogeranus ) is the most endangered of the crane species as these beguiling and harmless creatures are hunted with regular alacrity by the humans. The popular Indian varieties, common crane ( Grus grus ) and sarus ( Grus antigone ), along with the demoiselles ( Grus virgo ), frequently sighted in Pakistan, are also facing extinction. The threat to these birds come not just from hunters but also from ecological imbalances that are fast depleting their natural habitat.

A study conducted by B C Choudhury, a scientist with the Wildlife Institute of India ( wii ), says 1,761 sarus cranes were sighted in India in 1999. Most of these were in Uttar Pradesh and the rarer species, the eastern sarus crane, was found in Assam and Meghalaya. However, they may soon enter the annals of history unless urgent measures are taken to protect the species.
Neighbouring Pakistan falls into the cranes' flight path with two of the species, common ( Grus grus ) and demoiselle cranes ( Anthropoides virgo ) migrating through the country. The endangered Siberian crane ( Grus leucogeranus ) is also known to traverse this route. They breed in the Siberian tundra and fly south along various routes within Asia to spend the winter in warmer regions. They stop at a number of sites enroute to feed and rest when they are easy prey.

The birds encounter the worst threat in the North Western Frontier Province ( nwfp ) of Pakistan where catching live crane is a favourite sport. For inhabitants here, crane hunting is a local tradition and a symbol of social status. They are gifted to guests and adorn their lawns and courtyards.

According to a World Wide Fund for Nature-Pakistan ( wwf-p ) study, there are 200 hunting camps in Bannu and Lakki Marwat districts of the nwfp to trap the birds with nine hunters and 12 decoy cranes per camp on an average. The hunting season falls between October and November, when the birds migrate from their breeding grounds to wintering grounds and in spring from March to April when they return.
Kurram, Gambella and Kashew rivers are the major sites for crane trapping in Bannu and Lakki Marwat districts in nwfp . They are trapped with soya , a contraption of a long, thin, silky rope with a lead ball (weighing150 gramme) at one end. At the dead of night, as the unsuspecting birds fly past, the hunters simulate decoy cranes for long and loud calls. As they hear the calls, the cranes come down and are hit by the soya thrown up like a projectile. The alighting birds are then trapped, though about half of them are injured in the process.

The migratory birds are also indiscriminately fired at by the people living around the rivers of Bannu and Lakki Marwat districts. In India, too, the farmers in Uttar Pradesh, Gujarat, Rajasthan and Maharashta are also known to destroy the eggs of the cranes as the birds feed on their crops.
However, not all humans are enemies of the crane. Some worship them as messengers of god while others admire their beauty as they wing their way to distant lands. Many villagers help to conserve the near-extinct species, guarding, feeding and reviving them before they reembark on their journey. One such place is Khichan, a nondescript village near Phalodi in Jodhpur of Rajasthan, which plays host to thousands of demoiselle cranes. And it is a sight to watch as the villagers recieve their friends who arrive on an annual visit.
With the first rays of the Sun, the birds arrive, at first in flocks, then in swarms, from all corners of the sky, flapping their wings as they swoop down. Within the hour there are some 5,000 of these grey migrants everywhere -- on rooftops, in waterholes, on the fields, on the sand dunes of Khichan.

Human figures make their way to the winged creatures with containers full of grains of wheat, jowar (sorghum), bajra (pearl millet) and mateera (water melon) seeds. As the Sun emerges there are about 800 to 1,000 demoiselles jostling for space so they may peck on the feed in a 200 square metre feeding house called Chugga Ghar. And that's not all.While some 300-400 cranes are hovering above, another 1,000 or so are sitting outside with a couple of hundred more lounging on the sanddunes, waiting for their turn to feed. It is perhaps the grandest of avian spectacle.


The easy availability of plentiful food delights the cranes as the feeding process continues for two hours. After they have their fill, the birds settle on the dunes surrounding the village, sucking in the warmth and luxuriating in a catnap. Some of them fly off to the nearby vacant pebbled plots rich in calcium and gypsum to peck at the small granular stones. It's siesta time for them. A few members of the flock always guard the colony perched atop vantage points. Around mid-noon, the birds once again leave their roosts for a second feed. They never had it so good at their breeding grounds back home, or at any other wintering sites in Africa, India or China. No wonder the size of the Khichan wintering population keeps swelling every year.

Ratan Lal Malu and his wife, inhabitants of Khichan, have devoted their lives to the care of these cranes. They are Jains, a community well known for its non-violent vegetarianism. The Malu Charitable Trust, of which Ratan Lal is a trustee, takes care of these demoiselle cranes. Ratan Lal sees to it that the trust's grain godowns are always full. He receives donations in cash and kind from the large Jain community in Rajasthan that is both prosperous and generous. Everyday, about 120-160 kgs of grain (costing about Rs 3,500) is fed to the cranes. It all adds up to a monthly expenditure of about Rs one lakh, Rs six lakh for the entire period that the birds stay.

Every morning at the crack of dawn the Malus religiously attend to their chores of sprinkling grain at the feeding grounds. And while doing so Ratan Lal talks to the birds, comforting, assuring and even admonishing them when they play truant. The Jains have truly been surrogate parents to these magnificent birds, cautioning outsiders and allowing no one to disturb them. Perhaps at no other place in the world have any of the 15 crane species developed such close affinity with humans as at Khichan. Love for animal conservation comes naturally to these simple folks and is handed down from generation to generation.


Unfortunately, not all of us are like the Malus and apart from callous human misdemeanours that kill the birds, vastly altered ecological balances do their bit too. The birds' natural habitat like wetlands and grasslands mosaic is giving way to agricultural lands like soybean and sugarcane fields, which is "akin to deserts for the sarus cranes", say wildlife experts.

According to the wii study, agriculture has spread right up to the water level in the wetlands which has forced the birds to the croplands. However, with majority of the lands turning into soybean and sugarcane fields, the birds have little to feed on as their staple consists of seeds and tubers.

Important wetlands along the Kurram, Kashew and Gambila rivers in Pakistan have been completely degraded due to diversion of its water for irrigation and flood protection. Besides, deforestation in the catchment regions of the rivers is causing siltation. The silt load deposited in wetlands and domestic wastes drained and dumped there cause eutrophication which increases herb and shrub growth. This reduces marsh lands and shallow waters, the preferred breeding grounds of cranes. Besides, the pesticides used by the farmers have proved to be a bane for the cranes. With many of them still using banned pesticides, cranes have fallen susceptible to these as studies show presence of chemicals like benzene hexachloride and aldrin in the sarus cranes. This gradually leads to their demise.


Cranes are vanishing so rapidly that they are now proposed to be placed in the 'endangered' category of the Convention on International Trade in Endangered Species of Flora and Fauna (cites), says Choudhury. To protect these exquisite species, one needs to educate the public, particularly the farming community, in the use of pesticides and heedless killing of the birds. "Non-invasive education and a study on the distribution zone at a macro level are needed to conserve the species," says Choudhary.

Reported by Rauf Hameed from Pakistan, Lian Chawii from Delhi and Amit Shanker from Rajasthan