By giving up on traditional oils, we lose out on nutrition 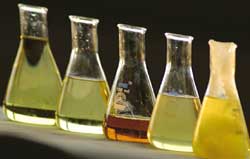 Adjacent carbon atoms of saturated fatty acids have a single bond; those of mufa have a single double bond, while carbon atoms of pufa have more-than one double bond (see table: Fat composition). While some chains, such as palmitic acid, are known to elevate levels of low-density lipoproteins (ldl, a bad cholesterol), others such as omega 3 and omega 6 acids are known to promote immunity or are good for the heart. Traditional Indian cooking mediums such as mustard and coconut oil are rich in these constituents.

However, aggressive marketing by the edible oil industry has almost put paid to the future of such oils. In the early 1970s, sfa-rich palm oil was promoted as a cheap substitute to traditional oils. And then in the 1980s, the industry went berserk in favour of a few unsaturated fat-rich oils. First, there were frenetic campaigns to demonstrate that canola oil was good for the heart. The argument was that this oil was akin to olive oil, since both were mufa- rich. Many, who knew that olive oil was good for the heart, lapped this reasoning up. Then, pufa- rich sunflower and soybean oils were touted as good for the heart.

But the scientific community slowly got under the skin of these arguments. For example, in a 1997 article in the American Journal of Nutrition, us- based researchers Z Lu, S Hendrich, N Shen, PJ White and L R Cook demonstrated that soybean oil consumption reduces the human body's high-density lipoprotein (hdl, a good cholesterol) levels. It was also demonstrated that their carbon bonding makes pufa- rich oils much more biologically active than saturated oils. So, these fats can get deposited in tissues and disturb their activity.

There was also bad news for votaries of mufa- rich non-traditional oils such as canola. In 1991, researchers at the us- based Boston University of Public Health demonstrated that high intake of this oil causes coronary heart disease.

But how exactly are unsaturated-fat rich oil made suitable for making processed foods? This is done through the process of hydrogenation: breaking the unsaturated fat's double carbon bonds by adding hydrogen to them. This process creates chemically active trans-fatty acids, which have several harmful effects: they inhibit the human body's immune functioning, reduce its energy metabolism and increase insulin levels. These trans-fats are also known to increase ldl levels. Also, in normal course, mufa is known to raise lower hdl levels. But mufa- rich oils lose this quality when they are hydrogenated.

Extraction processes also impact edible oil quality. The food industry prefers to use solvents, such as hexane, to extract oil from seeds. This method is cheaper, increases the yield, gives the oil longer shelf life and also removes all taste and flavour from it. But the solvent has to be removed by boiling the oil; this also removes nutrients. Traditional oils, in contrast, are extracted by manual grinding. Such oils retain their flavour and nutritional value.

Awareness on how constituents and extraction processes affect edible oil quality is increasing in developed nations. The latest dietary guidelines for us citizens, for example, recommend that trans-fatty acid consumption should be kept to a bare minimum. Such awareness is only at a nebulous level in developing countries. At a meet to discuss the World Health Organization's (who) global strategy on diet, physical activity and health in India -- held in New Delhi on April 26, 2005 -- participants suggested that trans-fats need to be reduced and healthy oils should be consumed.


While the scientific community is slowing veering around to the ill effects of non-traditional oils, consumption of such oil is on the rise. Palm oil, soyabean and sunflower oil constituted only 4 per cent of edible oil consumption by Indians till the mid-1970s. Today, they make up almost 60 per cent of the edible oil consumed by Indians. The country's annual average vegetable oil imports -- mostly palm and soybean oils -- rose from about 0.3 million tonnes (mt) in the period between 1988 and 1994 to 5.2 mt between 1998 and 2002 (see box: An unhealthy shift).

At the same time, research has shown that our traditional cooking mediums have several health benefits. For example, a 1995 study by researchers from the University of Kerala, Thiruvananthapuram demonstrated that coconut oil consumption was good for hdl levels in blood. Besides, coconut oil is known to protect against viral and bacterial infections and also has anti-inflammatory properties. The oil also does not need to be hydrogenated before use by the processed food industry. But of course, coconut oil is much more expensive than vegetable oils and so the industry avoids it.

Research has also demonstrated benefits of mustard oil. For example, a 2004 study by researchers from India and the us -- published in the American Journal of Clinical Nutrition -- suggested that omega 3-rich mustard oil is very effective against certain types of heart diseases. Omega 3 makes up about 12 per cent of the fatty acid content of this oil. In contrast, the omega 3 content of non-traditional cooking mediums such as sunflower oil is only about 0.5 per cent. The edible oil industry's claims that sunflower oil is the best for the heart thus ring quite hollow. By lapping up these hollow claims, we are losing out on our healthy oils.


The us has taken care of the problem -- to an extent -- by stipulating packaged food manufacturers indicate quantities of trans-fats on labels of their products. There is no such provision in India. The April 26 meet on who's global strategy diet, physical activity and health recommended that the government increase awareness on healthy oils and make them more affordable. Is the government up to it?