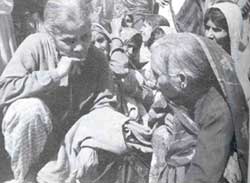 MAKAR Sankranti, January 14, is an auspicious day for Hindus. In Rajasthan, it is the day of reconciliation. This year, a motley group of 15-odd people set out that day on a 15,000 km walkathon through 18 sanctuaries and national parks (NPs) spread over 5 states. Their moving force was a single slogan: "Jangal, jal, zameen bachao" (Save the jungles, the lakes and the land). This was the Jungle Jeevan Bachao Yatra (JJBY), a sort of missionary voyage to inform people of the urgent need to save forest ecosystems.

The group's membership fluctuated between 15 and 40, with 10 as the core group. It included sworn combatants -- forest department officials and NGOs. But most importantly, there were the dispossessed, that ultimate collective entity whose interests should matter the most: people living in and around the forest areas, people unceremoniously ousted.

The yatris (travellers) broke their butts in jeeps and vans, mulling about the real issues in forest conservation. In the evenings, petered out, activists stayed wherever they could: some in luxurious rest houses, others in primitive ashrams with 4 walls and little else.

Among the main organisers were NGOs like the Tarun Bharat Sangh (TBS) from Rajasthan; the Pune-based Maharashtra Arogya Mandal (MAM); Arch Vahini and the Centre for Environment Education (CEE) in Gujarat; Bombay's Indian People's Tribunal (IPT); the Ekta Parishad of Madhya Pradesh and Delhi's Kalpavriksh.

The group probed issues facing today's "protected area managers" -- the forest department. The yatra waded into the deep waters of indigenous cultures, combing through traditional institutions of resource management for inspiration, trying to track down alternative approaches to the problems it sought to address.
The injuries were old, and still bleeding. Everywhere, the yatris came upon people alienated from the forests and resentful of the parks and those who administer them. To the embittered locals, forests and wildlife mean "sarkari ped" (the government's trees) and "sarkari sher" (the government's tigers). Conservation conjures up in their minds images of hostile forest guards denying them access to a resource base that no one had yet told them wasn't their's.

Even so, people in many areas have expressed their desire to work with the forest department (FD) towards their common goal of conservation. The FD, however, considers these mild vigilantes an unmitigated evil, a threat to governance.

For the oustees, the uprooting came suddenly, a very real nightmare. The Wildlife Protection Act (1972) specifies that people should be informed of even the intent to declare an area "protected". But that never happened. "We used to live in the jungle. One day we were suddenly told, 'Yahan Project Tiger a raha hai. Bhago' (Project Tiger is coming here. Get out)," says Khudyan Singh Moravi of Lonadhar village in Balaghat district. Khudyan is an oustee from the Kanha NP.

The relocation of displaced villagers was a farce. In Gujarat, the Maldharis from the Gir NP were resettled in Jalandhar in Punjab. Traditionally, pastoralists, the Maldharis now eke out a living as wage labour. After 17 years, only a fragile peace exists between the 2 communities.


Not a twig from the forest belongs to the people who once nurtured it. At Khursipar, a village bordering the Kanha NP, Viren Singh, a Baiga tribal, said, "Sab kuch mana karte hein (Everything is prohibited). Even if we want to get some datun (neem twigs) to clean our teeth, we are beaten up."

A lack of fodder is whittling down the livestock population. "There is plenty of fodder in the jungle, but we can't enter it," says Puran Singh Moravi. "The park has snatched away our livelihoods."

It's Hobson's choice: obey the laws and perish, or break them and get beaten up. At the Rajaji NP, Lakhan Singh, a baan-worker (weaver of a type of grass rope) in Buggawala, said, "We have always been using bhabar grass to make baan. Just because we are debarred now doesn't mean we suddenly don't need it. So we get it, somehow. But the FD thinks it's illegal."

Skirmishes between villagers and forest guards are routine. Women are are routinely run through humiliation. Kasturi, a Sahariya woman from Karondi, near the Madhav NP, Shivpuri, says, "Bolte hain ki kapde utar lenge, be-izzat kar denge" (They say they'll strip us and rape us). Adds Ajjo, "We used to look after the forests like we would after our children. But now they ask for a bribe of Rs 50 even for a twig."

There was ample evidence of the symbiotic relationship between forests the people. "They have a history of conservation. For them, the forests are not merely timber but an integral part of their life," says Kusum Karnik of the MAM. Indeed, across the country, conservation efforts by the forest people have become institutionalised. In Rajasthan, for example, twigs more than a human finger in diameter are never lopped. In Shivpuri, the Sahariyas have religious sanctions against killing tigers.

Villagers in Rajasthan talked about the devbanis and devrais (sacred groves), where large patches of forests are left undisturbed. They have achieved what the government and its hamhanded FD has often failed to do -- guarantee the protection of gene pools. Says Kondiba of the Bhimashankar sanctuary, Maharashtra, "You still see these forests today only because we protected them by forming devrais."

The mindless conservationism of government agencies has only fouled up things. At the Keoladeo NP in Bharatpur, Rajasthan, the blanket ban on grazing has led to grass choking the wetlands. Villagers are keen on working out a plan for controlled grazing, cooperating with the FD if necessary, to revive the wetlands. "A world famous park is a matter of pride for us. We would like to save it," said a resident of Agapur village.


However, the forest department is unwilling to share power with the forest people. Says Rajesh Gopal, field director, Project Tiger, at the Kanha NP, "If the people are allowed to remain within the park, they'll become like ulcers." Adds Srinivas Murthy, deputy director at Kanha, "We have been able to manage the park well because of the stringent protection measures we have adopted."

The real threat, of course, comes not from the people but from the commercial lobbies. A tourist complex around the Bhimashankar temple within Kanha has expanded, devouring adjacent land, while access for the tribals is severely restricted.

In Gir, 50 ha of land have been transferred to the Kankeshwari Temple Trust, while the Maldharis living within the park are threatened with eviction.

Agroindustry has made insidious inroads into the Bhimashankar sanctuary. The tribals have been lured with the financial temptation of supplying the industry with stalks of the karbi plant, which are used as supports for growing tomato plants in the region outside the sanctuary. The Kerala government is planning to hand over hundreds of hectares to commercial interests.

At the Shoolpaneshwar sanctuary in Gujarat, a battery of guards prevents the Vasava tribals from gathering bamboo. But, says Pandya from the Sakdi village in Shoolpaneshwar, "Every day, truckloads of bamboo go from here to the paper mills." Officials, however, claim that the removal of bamboo has created a grassland habitat ideally suited for herbivores.

But leases given to the mining industry (to operate within the sanctuaries) are the worst examples of official double standards. Close to 100 marble quarries are busy operating within the Jamva-Ramgarh sanctuary in Rajasthan, while in Sariska, only fierce protests by the people moved the Supreme Court to order their closure.

Unfortunately, the FD often follows the distressing norm of limiting management within the boundaries of the park. In Shivpuri, quarries are being operated near the Madhav NP, virtually at forest's doorstep, as it were. No attempt has been made to shut them down; the problem is that since ecosystems have open boundaries, the parks are influenced by events outside them -- like mining.

A handful of forest officials do seem to be braving the all-powerful industrial and mining lobbies. Ajit Sonakhia, conservator of forests, Jabalpur, says "As long as I am here, I will not allow industry in the forests." The van-and-jeep riding urban middle class yatris, of course, gave him a standing ovation.


It was an enlightening trip down miles of lush green forests, costing close to a lakh of rupees. But, in the end, ideological schisms and a superficial understanding of the issues involved surfaced like allergy rashes.

During the trip, villagers in Bhimashankar thundered, "Sanctuary hatao!" Therefore, at a meeting in Karondi in Madhya Pradesh, Karnik exhorted the Sahariyas, impoverished by the local park, to do the same. "If the park doesn't benefit the locals at all, I don't see why it should exist," she said. But, another miffed yatri from Bombay didn't like that at all: "We are not here to do netagiri."

Some among the yatris even questioned the people's attitudes towards their own resources. Virender Singh of Kalpavriksh asked, "If the people were really so concerned about their forests, why didn't they fight against their takeover by the British?" Singh is evidently not aware of national heroes like Birsha Munda, who organised a tribal revolt that had shaken British rule in India towards the beginning of this century. And that is just one instance.

Perhaps a much worried Govardhanbhai from Ajabgarh best summed up the state of affairs, "Baat to yeh zameen ki karte hain, par kuch log to chand par rahte hain" (They talk about the land, but they live on the moon).