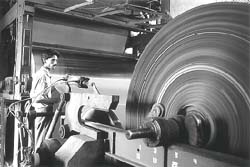 representatives of India's pulp and paper industry met the Green Rating Project ( grp ) unit of the Centre for Science and Environment, New Delhi, to take stock of their environmental performance more than one year after the release of the first ever environmental rating of its kind in the country. On September 26, 2000, the corporate heads of the sector and cse got together to assess the developments in the industry's perception of the rating process. Various companies reported the changes they had engineered towards cleaner operations and greater efficiency as a result of the rating.

Two years of hard labour, detailed investigation and comprehensive exchange of information between the industry members and cse led to the first ever ratings of the kind in India.

Usually, one would hear stories of the casual and callous attitude of the corporate world towards environmental concerns. The pulp and paper industry was said to be especially notorious for the lack of transparency about environmental matters. But the industry, after initial hesitation, had shown a healthy maturity in divulging information and interacting with honesty.
On July 18, 1999, the rating was released and presented to the president the next day. Supported by the Union ministry of environment and forests and the United Nations Development Programme, the entire process involved 18 months of detailed analysis, research, investigation and field studies (see box: The first time).

It would have been a futile exercise had cse left the process at that. But the rating process is visualised as a continuing one. In 2001 the industry will be rated again. Therefore, the grp unit felt the need to improve the rating process as well as assess what difference, if any, the previous rating had made to the industry's approach.

Anil Agarwal, director of cse, told the assembled that the target was not to meet domestic standards. "We must know where we stand with respect to global standards," he said. Quite a few units presented information exhibiting that the industry is moving in the right direction and the rating process deserves some credit. "The project convinced us into adopting cleaner technology for our new pulping project," says S Raghuveer, manager in itc -Bhadrachalam Paperboards Limited, Andhra Pradesh. cse believes grp creates a 'reputational incentive'. T S Chellam, vice president (environment), at siv I ndustries, Tamil Nadu, confirms this, "We have submitted the rating and other observations to financial institutions and government agencies to project the positive attitude of the company towards environment related issues."

A change in the attitude is also visible at some plants. Earlier, environmental standards were, at best, adhered to and, at worst, ignored. "grp has changed the attitude of the company. Earlier the focus was to comply with regulatory standards. However, we now aim towards bettering performances," says Santosh Kumar Singh, forest officer at the Orient Paper Mills in Madhya Pradesh. The company is currently working to ensure zero discharge of coloured effluent into river Sone." grp 's reputation in the corporate world as a barometer of a company's environmental record has helped gain in terms of pure economics as well. "We have shown the rating we received to convince financiers into giving us loans," says R Varadhan, head corporate research and development at Ballarpur Industries, New Delhi.


There are two ways of getting wood. One, buy it from government owned forests and cause depletion of the national forest cover. Two promote farm forestry and help utilise unproductive lands. "There is a lot of unproductive land which can be brought under farm forestry, " says Agarwal. In the short span of a year and half many companies have begun to alter their policy of buying wood from natural forests and move towards farm forestry.

grp' s initial endeavour has achieved much. Ashok Kumar, general manager of Star Paper Mills Limited, based in Saharanpur, Uttar Pradesh, says, "The proportion of fibrous raw material from plywood waste and farm forestry has been increased to 65 per cent." K S Kasi Viswanathan, senior vice president (operations), of Seshasayee Paper and Boards Limited in Erode, Tamil Nadu says, "For pulping we now procure hardwood only from human-made forests and have given up procurement from natural forests." Usually, business-persons would like to score over rivals by valuing their net-worth. Environmental astuteness, one can see, is becoming an issue to score points on.


While the companies try to improve individually, the industry as a whole suggests improvements in the rating system as well. cse is receptive to the industy's suggestions. The rating process has been interactive. They suggest the rating should be different for different types of producers as basic techniques of production differ in baseline efficiencies. Producers also ask for the criteria being discussed with them well in advance.

Sunita Narain, deputy director of cse, says, "We should take into account the sourcing of imported pulp and what impact it has on the environment of that particular country."

Agarwal believes surveyors sent out for field inspection need not be technical experts. Some companies have desired otherwise. The work is cut out for the grp unit of cse . By year 2001, it will have 58 companies, with installed capacity of above 100 tonnes of paper per day, to assess.