Ayurveda prescribes it for heart ailments; no data available on surviving plants 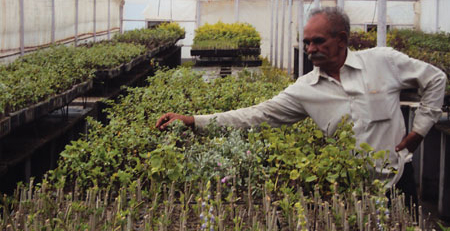 India is these days relying on imports to meet the demand for a plant extract valued for its medicinal properties. Guggal or Commiphora wightii grows in the wild in the arid and semi-arid regions of Pakistan and northern India; its resin, guggal-gum, is prescribed in Ayurveda for heart ailments, obesity and arthritis.

Pharma companies also use it in drugs for reducing cholestrol. But the gum’s availability in India has plummeted because guggal shrubs are disappearing from its main habitats in Gujarat and Rajasthan. Very little data is available on the shrubs left; the International Union for Nature Conservation (IUCN) has put it in the data-deficient category. “The demand for guggal-gum has more than doubled in the past 10 years.

We are completely dependent on imports from Pakistan—about 400 tonnes a year,” said Rakesh Agarwal, a dealer of medicinal plants at Khari Baoli wholesale market in old Delhi. He said supply from Rajasthan and Gujarat is very little. As a result, the gum’s price has risen from Rs 25 to Rs 300-Rs 500 per kg in the past decade. The demand is driven by drug companies. Research shows that guggalsterones (the active compound in guggal) inhibit cholestrol synthesis, said N Srikant, assistant director with the Central Council for Research in Ayurveda and Siddha under the Union health ministry (see box).

Unregulated exploitation of guggal for its resin is the main reason for its disappearance, said Vineet Soni, associate professor at the Jaipur National University. Soni, a member of the IUCN, said tribals and people in villages use crude methods to extract gum; the government has not standardized tapping methods. “They make deep cuts on the stem and then apply a paste of horse urine mixed with cobalt sulphate (a toxin) around the incisions. This increases gum yield four times, but the shrub dies within a month or two,” said Soni. The resin ducts are present in the cortex region of the plant and a halfinch cut is enough to tap the gum. Deep cuts damage the vascular bundles transporting water and nutrients and inhibit metabolism, he explained.

The destroyed shrubs are not easy to replace. Guggal seeds do not germinate easily and the saplings take a long time to mature—about 10 years. “We do not cultivate guggal because it would occupy our fields for a long time,” said Nanchi, a resident of Ballabhpura village near Jaipur.

Galta hill range on the outskirts of Jaipur is one of the areas identified for guggal conservation. “The hills were full of guggal trees 30 years ago. We used to climb the hills with the help of its branches. Only a few are left now,” said Kesar Lal, a 52-year-old shopkeeper in Jaggah Ki Bawri village near Galta. Tapping and felling for fuel destroyed the shrubs, he said, adding forest officials hardly survey the hills. The incharge of Galta post, G S Rathod, refuted villagers’ claims. The hills are divided into beats and surveillance is round-theclock, he claimed.

The government has initiated a programme to conserve medicinal plants, including guggal under the National Mission on Medicinal Plants in 2008- 2009. The mission encourages cultivation of medicinal plants to reduce the pressure on forests and has listed guggal in the endangered category. “Rajasthan and Maharashtra proposed 125 hectares (ha) and 25 ha respectively under the mission for guggal cultivation. We are awaiting reports on the success from the sites,” said R B Singh, consultant with the National Medicinal Plant Board. The board has sanctioned Rs 11.25 crore for three projects and offers 75 per cent subsidy on guggal cultivation.

The Rajasthan government has undertaken a Rs 6.50 crore project on its own for conserving the plant and expects to bring 1,700 ha under guggal cultivation by next April. “We are raising 486,000 saplings. These will be distributed to nurseries in 32 districts,” said Shikha Mehra, conservator of medicinal plants in Rajasthan. The state has also set up hi-tech nurseries under the project where the stem cuttings are nurtured in controlled temperature of about 35°C. The saplings are then kept in normal temperatures and acclimatized before they are planted in the wild.

Officials in the forest department said the project may not work because sophisticated technology and monitoring are required to ensure survival of the saplings in the wild. “The success rate of guggal transferred from the nurseries to the wild is 30-40 per cent,” said Ramkaran Chaudhary, forestry incharge of the hi-tech nursery at Jagatpura locality in Jaipur. Soni said the conservation efforts have started rather late as the plant population has been declining for sometime.

Only a concerted effort by the government in collaboration with scientists and the community can now save the plant, he said. Soni is spearheading a Save Guggal Movement in Rajasthan to spread awareness about the shrub. Soni’s research, published in the South African Journal of Botany, has shown higher concentration of guggalsterone in the shrubs in central, northern and western Rajasthan. These can be used for mass propagation and genetic improvement. 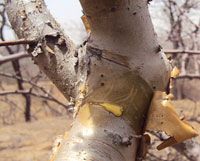 Guggal-gum extract targets the Farnesoid X Receptor (FXR) that regulates cholestrol and checks bile acids produced from cholestrol by the liver, according to a study by Southwestern Medical Center in Dallas and the Baylor College of Medicine in Houston. The ethyl acetate extract of the resin was found to lower lowdensity lipoprotein cholestrol and triglycerides in humans.

A study by Texas Southern University in Houston has suggested guggalsterone can suppress tumours, their growth and spread.