A village crippled by fluorosis

Government offers Rs 25,000 each to 109 BPL families to relocate; villagers turn down the offer

A village crippled by fluorosis 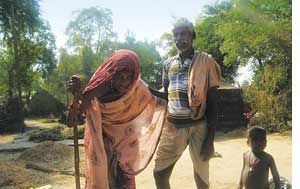 Pabani Pradhan, 42, looks 60. She can’t walk on her own. Joginath Pradhan, 60, Pabani’s neighbour, uses crutches. Sukant, 24, the sole breadwinner of a family of six, cannot move out of the village to fit tiles in people’s houses any more because his body has become stiff. Fluorosis has crippled them, and other residents of Balsingh-Singpur in Khurda district of Orissa.


“Underground rocks contain fluorine. When the groundwater table depletes, fluorine reacts with the oxygen to form fluoride,” said B K Pati of the non-profit Regional Centre for Development Cooperation. “More the depletion of aquifers, higher the concentration of fluoride,” said Pati who has seen people suffer over the years.

Groundwater depletion in the state is on the rise. So is fluorosis—people of 16 districts suffer from it. And, visits to primary health centres yield only painkillers. The disease has no cure, said Samira Kant Champati, medical officer at the primary health centre in Bankoi in Khurda. “If fluoride accumulates in human tissue, it cannot be dislodged,” he said.

Eight years ago, the government conducted tests in three open wells of Balsingh-Singpur. The fluoride content was 4.6 times the permissible limit in one. The other two had 4.8 times and 3.9 times the fluoride the human body can manage without adverse consequences. After the results, the district administration advised villagers to stop using water from the wells. The options it presented the villagers were a dysfunctional pump house—and relocation.

The pump house was set up at Balsinghpatna, about a km from Balsingh-Singpur. “It does not function because there isn’t enough diesel to run it. We still depend on the wells,” said Prahlad Baliarsingh, a villager. The additional block development officer of Bolgarh, Hrudanand Sethi, said he tried his best to ensure the pump house worked. He had also asked the Rural Water Supply and Sanitation Board to conduct fresh survey to check if groundwater could be chemically treated, but it would be much simpler for the villagers to relocate, he added.

The district government has alloted a site in New Singhpur for relocation, a kilometre-and-a-half from Balsingh-Singpur. It is a four-hectare patch where the fluoride in water is within permissible limits. But there is no guarantee that the fluoride levels will not assume threatening proportion.

Villagers are reluctant to move. “The government has given Rs 25,000 each to 109 families living below poverty line to construct houses at the site,” said Prahlad Baliarsingh, a villager. “It would be impossible to construct even a room with that amount. We want the government to construct houses and then ask us to move.” Sethi considers this preposterous. “We have given them the best we could. Now they should move in their own interest instead of making such demands,” he said.