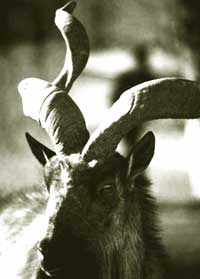 About 50 village conservation committees (vccs) in the under-developed districts of Chitral and Kohistan in Pakistan's North West Frontier Province (nwfp) raised about us$144,000 in 2005 through trophy hunting of the flare-horn Kashmir markhor, an endangered species. In 1990, trophy hunting of the markhor was banned completely after it was included in the Appendix i (meaning "rare or endangered and in which trade is not permitted") of the Convention on International Trade in Endangered Species of Wild Fauna and Flora (cites). Since then, the animal's population has increased due to conservation efforts that involved local communities of the mountainous regions.

Official sources claim population of the markhor has increased since 1990. And since the repeal of the ban in 1996, trophy hunting has brought money to people living under acute poverty -- they get 80 per cent of the money coming from the hunts. In 2004-05, each of the four permits issued for markhor trophy hunting in nwfp fetched us$45,000. For the first time, the scheme was extended to areas other than Chitral district, which pioneered markhor trophy hunting in 1975 (see box: Hunting highs and lows).

This meant that Kohistan district's Kaigah Nullah conservancy hosted its first foreign hunter. "In all, the province raised about us$180,000 from the sale of four permits for the season ending April 11, 2005, with the shooting of the last of the four animals by a Spanish hunter in the Tooshi-Shasha conservancy," says Mumtaz Malik, conservator with nwfp's wildlife department (and, say some, the man who proposed trophy hunting in the 1980s). As agreed upon, 80 per cent of the proceeds raised through the shooting permits go to the vcc s in whose area the hunting takes place. The remaining 20 per cent goes to the provincial kitty as revenue receipts.

"Part of the vccs' share of the money is spent to pay salaries to watchmen each vcc has recruited for protecting markhors in their large conservancies. Substantial funds have also been utilised over the years to carry out small infrastructure schemes in villages of the conservancies," said Syed Muzzafar Jan, president of the markhor conservation committee of Syedabad village, 22 km south of Chitral town.

Shahzada Sikandar, resident of Tooshi village and an office bearer of the Al-Burhan Conservation Society, credits the scheme's success to the involvement of the communities in managing their natural resources. He quotes a recent survey by the wildlife department to point out that the markhor population in Tooshi has increased from 200-250 in early 1990s to 400 plus at present. Habib Ahmed served in the conservation group wwf-Pakistan as technical advisor in Peshawar. He reckons the communities protect the animal as it makes economic sense. If they kill a markhor, they'd earn Rs 1,500-2,000 (us$25-35) in the local market. Trophy hunting fetches them thousands of dollars. Ahmed supports trophy hunting because the markhor has a lifespan of 15 years; better to utilise it for the benefit of those living under acute poverty.

Jan insists this has brought about a behavioural change in some 40 villages in Gehrait-Goleen and Tooshi-Shasha conservancies. Officials cite several villages in the conservancies that have given up cutting trees or grazing sheep in the protected forest. "People want to create a habitat attractive for markhors as they realise its significance," says Asad Lodhi, ex-project director of the protected areas management project, Chitral Gole National Park, adding that involving communities in conservation has created hundreds of jobs.

Malik says the wildlife department has chalked out five-year management plans for each conservancy. The watchmen recruited from among the villages also act against trespassers. Malik refers to incidents of vccs imposing fines up to Pak Rs 30,000 (about us$500) on those caught carrying guns inside the game reserves, which is illegal. Some of the vccs also get direct donations from the foreign trophy hunters.


Each vcc has recruited guards for their area of the conservancies. There are reports from some places that vcc s have spent funds on roads, water supply schemes, irrigation channels and water points for wildlife; they've tried to improve the markhor's habitat by carrying out plantations. Jan mentions a vcc that used the funds to get an electricity connection from a nearby hydel power station. Half of the vccs' share of the money goes to the village in whose area the hunt takes place. The rest is distributed among the remaining vccs falling under the conservancy.

But things aren't always smooth. The wildlife department barely honoured its commitment with foreign hunters this year after some of the vccs of the Gehrait-Goleen and Tooshi-Shasha conservancies threatened to stop hunters in their areas unless the department paid them last year's dues. A vcc in Tooshi-Shasha moved the court of the civil judge in Chitral, pleading it to direct the wildlife department to release its share of last year's proceeds. The court stayed trophy hunting in the said conservancy till March 28, forcing the department to make an alternate hunting plan for a Spanish hunter who'd paid up already.

"The matter stands resolved and the hunter, Antonio Morales Gardey, hunted a markhor of his choice on April 11, 2005, bringing a successful end to this year's trophy hunting season," said Mumtaz Malik, conservator at nwfp's wildlife department. He promises the department will distribute last year's dues to the vccs concerned on April 25 in a ceremony that the provincial chief minister, Akram Khan Durrani, will preside over. Nonetheless, conservation experts say this has exposed the system's vulnerability. They stress the provincial government needs to take prudent measures to create harmony among the vccs, and resolve their internal monetary disputes to ensure smooth continuity of the system in future.

What do conservation groups feel about the scheme? Habib Ahmed supports it for being good in terms of helping communities fulfil their needs. "But ethically it doesn't look good. On the one hand you are protecting an animal to prevent its extinction, and on the other, you bring a European or an American to hunt it for a price."