IN TUNE WITH THE MASSES

IN TUNE WITH THE MASSES 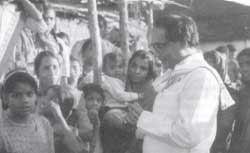 IT WAS unexpected. A sudden increase in tribal voter turnout and the impact of Panchayati Raj programmes swung the scale in favour of the Congress in Madhya Pradesh's (mp's) Legislative Assembly elections. Vikram Verma, opposition leader in the last mp Assembly, was projected as the next chief minister (cm). Digvijay Singh, a close friend of his, had advised him not to contest from a tribal and minority dominated area. But he did - from Dhar - and lost by 127 votes. The number of votes cast was 1, 11,000. The turnout was very high in tribal areas - about 80 per cent, reportedly.

This belied all predictions that leak ages in the Panchayati Raj system and decentralisation of power would decentralise corruption and lead to the defeat of the Congress. It only resulted in a resounding win for the Congress.

Decentralisation brought forth a new level of rural leadership in the last five years. In fact, it allowed the Congress to induct 71 new faces into the elections. For each ticket, there were six to seven serious contenders in one district who had the potential to win an election. The BJP, however, did not have such options as it failed to reach the people at the grassroots levels. The Congress was able to bring rural leadership to the fore. In all, 27 new mLAs have a Panchayati Raj background.

"Panchyati Raj and various other welfare measures did contribute to the election (results) substantially," Singh says (see interview: Decentralise and rule). People had realised that due to the programmes under the Rajiv Gandhi missions, they were getting a share in power and were being included in gov- ernance. The power which was concen- trated earlier in Bhopal was gradually coming into the hands of the people. For the first time village committees had control over money to run these pro- grammes. Sanjay Shukla, chief executive officer, Z111a Panchayat, Jhabua, says: "People have started realising that because of Panchayati Raj programmes they are getting powers in governance."

A very interesting trend was thus revealed when several panchayat presidents, not only from the Congress but also from the BJP, were victorious. For example, in Dharampuri constituency of district Dhar, the BJP candidate was a sarpanch. He did not have any political experience nor was he backed by any heavyweight. He had only been a sarpanch for five years. In Badnawar constituency of Dhar district, the BJP candidate was a member of the Janpad panchayat. He is a farmer by profession d are and is a novice to politics. It seems that the voter cut across party lines to vote for those who had worked at the grassroots level.


In the district of Jhabua, where a major watershed programme transformed the area from a moonscape to a green belt, Nirmala Bhuria, the BJP candidate won from Petlawad. There were reasons for her victory. Being the daughter of Dilip Singh Bhuria helped.

Dilip Singh was closely associated with the watershed programme. Most of the Congress workers in the area also moved with him to the BJP when he left the Congress. Dilip Singh Bhuria had done a lot ofwork for the tribals when he was member of Parliament from Thabua. In Petlawad, therefore, the contest was not between parties but between individuals. The community voted for some- one who had worked for its welfare.

Since the beginning of the Panchayati Raj system in mp, development activities have shown outstanding results. Farmers are now growing cash crops like soybean and tomato. There is enough water for irrigation.

In Alirajpur constituency of Jhabua, the Congress retained the seat. The BJP never had a programme of its own in the rural areas. It could not go to the people and say that the Congress had not done anything for them.

"They failed to convince the people that the Congress had done nothing in the last five years," says Nikunj Soni, acting principal in Nanpur high school ofAlirajpur.

"Tribals have started realising that it is their own government and that they are now getting both power and impor- tance. They also know it is the Congress which is doing this," he adds.

In fact, the tribal vote played havoc with poll forecasts. Though the Congress did not win in all tribal areas, its losses were adjusted against gains in other areas. A small swing was good enough to help the Congress retain power. The importance of this minute swing was the deciding factor, especially as the Congress and BJP were running neck to neck in the race for power. Both were in a way braving the antiincumbency factor: the BJP for its failure at the Centre, the Congress as the incumbent in the state.

"That is the only obvious reason of Congress's victory now," acknowledges BJP leader Sunderlal Patwa.

According to state election commission's office sources, the empowerment of tribals and giving them a say in their own destiny has resulted in more tribals voting this time than in 1993 elections. There is an increase of 10 per cent in the voter turnout in Scheduled Tribe seats, going by an assessment of 10 Scheduled Tribe Assembly constituencies spreading over six districts.

Observers attribute this rise in turnout to the half a million grassroots institutions that have been created under Panchayati Raj, Rajiv Gandhi Mission on Watershed Development, and the Education Guarantee Scheme. According to Ratan Singh Bhabar, newly-elected Congress MLA from Thandla in Jhabua, "Over the last four years, after the watershed (development programme) and Panchayati Raj came into force, our grassroots network became so strong that I won with over 60 per cent of the votes despite the strong anti-incumbency wave in the state."

This high turnout, accompanied with a swing, marginalised the antiincumbency factor for Congress at the grassroots level in the rural areas. While in urbanised regions, such as the Madhya Bharat, it was the vote against the rising price and non-performance of the BJP government at the Centre which helped the Congress gained.

BJP was considered to be strong in Chattisgarh. It is a good example of how the micro-level swing worked in favour of the Congress. The BJP'S call for the separate state of Chattisgarh produced no result. The BJP got 35 out of 90 seats from this demarcated state (a gain of five seats from the last elections), while the Congress got 46, a loss of eight seats as compared to the 1993 elections.

Chattisgarh showed contrasting results in different districts in the same region. The Congress swept the tribal dominated Bastar district by winning all the seven seats. On the other hand, in urban Bilaspur, the BJP got seven seats and the Congress managed to win only two. Bilaspur was declared a railway division by the Centre, a longstanding demand of the people. This put BJP in the favour of the working class. Five Congress ministers lost from Chattisgarh and three from Bilaspur.

Bastar is a priority area like Jhabua as far as the watershed mission and the employment guarantee scheme are concerned. In Bilaspur, there were also reports of political interference in Panchayati Raj affairs from former Congress ministers who, according to reports, were opposed to decentralisation. Moreover, officials admit that decentralisation was not as effective there as in Bastar or Jhabua.

---Reported by Richard Mahapatra from Bhopal, Rajat Banerji in Chattisgarh and Manish Tiwari in Jhabua.