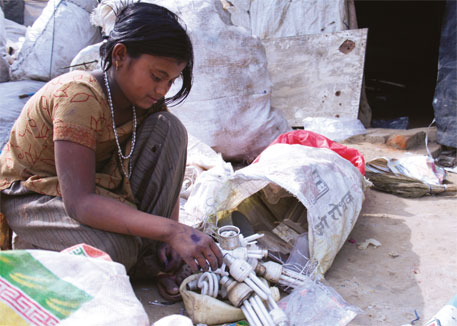 Neeta Chandra, a 26-year-old homemaker, recently read a Facebook post about the presence of mercury in Compact Fluorescent Lamps (CFL) and its dangers. She was shocked. When CFLs came into the market, she was the one who made sure her parents got rid of incandescent bulbs and switched to CFL to reduce the electricity bill. Nervously, she looked up on the Internet about mercury poisoning and came across the Minamata disease in Japan in the 1950s, which claimed more than 1,000 lives when sea waters got contaminated with methylmercury. Neeta counted the number of CFLs in her house—there were 15 of them. “If cigarette packets can have a warning, why can’t CFLs? I did not even know CFLs have mercury, and the government has been promoting them. How can it be so irresponsible?” she asks.

What pacifies her is the fact that mercury will escape from the lamps only when they break. Which means Neeta can continue using CFLs but will have to be careful about their disposal, especially when she has a two-year-old son and a pet dog running around the house. “The kabariwala does not want to take it. I have no other option but to throw used CFLs in the bin,” she says.

Adil, a kabariwala in Neeta’s locality, explains there is no profit in collecting used CFLs. “It is too much of a hassle. Most of the time the tubes break and the scrap traders do not pay much,” he says. Scrap traders send such lamps to recyclers, most of whom are based in East Delhi’s Shahdara or Seelampur areas, hubs of electronic waste. “The traders are not keen on taking lamps because they need at least three bagfuls of used lamps to be sent to Seelampur. I get a CFL occasionally,” says Adil, who pays Rs 1 for the bulb. He adds that kabariwalas will be encouraged to collect used CFLs if they get monetary incentive.

Neeta is just one among the few people who know that all CFLs have mercury, a hazardous metal that can affect the brain and the nervous system. She is willing to give away lamps to kabariwalas for free. “I am even ready to pay a small price if this could help in proper disposal of these lamps, but how do I go about it?” she asks. According to a survey by the environmental research and action group, Chintan, and German Society for International Cooperation (GIZ), about 70 per cent of the respondents in Delhi and Kolkata are ready to pay extra to ensure safe disposal of CFLs (see ‘Key findings of Chintan-GIZ survey’). A joint study by the two groups in late 2013 proposed that a marginal incentive of Rs 2.50 to Rs 3 could encourage kabariwalas to collect CFL bulbs. The report was submitted to MoEF early this year, but has been gathering dust as no one from the ministry paid heed.

There is no waste management system or infrastructure in the country to properly separate, segregate and handle end-of-life and discarded CFLs. This increases the chances of mercury entering the waste stream and the food chain. In the absence of a proper mechanism, used CFLs are thrown in the garbage or dumped at landfills. Ragpickers, who sort broken CFLs without wearing gloves or masks, are directly exposed to the mercury released.

Industry figures state that the manufacture of CFLs in India has increased manifold—from 67 million in 2005 to 304 million in 2010 and to 750 million in 2014 (see ‘CFL usage is growing’). According to studies by Delhi-based non-profit Toxics Link, more than 15 tonnes of mercury from CFLs have already leached into the environment. 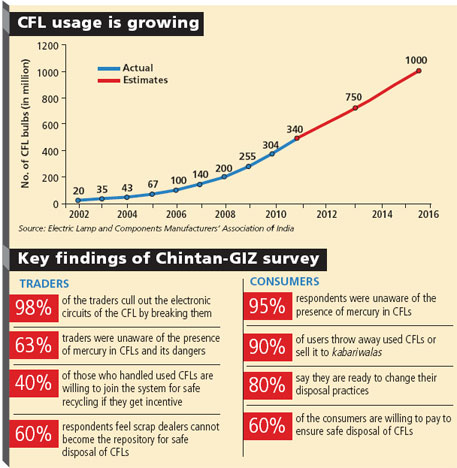 The Union Ministry of Environment and Forests (MoEF), along with the Central Pollution Control Board (CPCB), was responsible for framing a law on the safe disposal of CFLs. MoEF has missed several deadlines. In 2007, the ministry had set up a task force to look into the matter. The task force, comprising members of the Bureau of Energy Efficiency (BEE) under the Ministry of Power, CPCB, MoEF and industry representatives, submitted its report to MoEF in May 2008. But the industry rejected the report, saying that if any of the suggestions were made mandatory, it would make CFLs expensive.

The industry then commissioned The Energy and Resources Institute (TERI) to prepare a report on mercury content in CFLs and their disposal, which was to be finalised and submitted to MoEF in the beginning of 2012. The report, which was presented to an inter-ministerial group, suggested a pilot project of six to eight months in Delhi, Ahmedabad and Bengaluru. The two-phase pilot was proposed to start in March 2012. Under this plan, CFLs were to be collected and disposed of in crusher drums, which would be carbon coated to contain the mercury released from the crushed CFLs. These would then be taken to a mother plant where glass and aluminium would be extracted from the waste for recycling. MoEF did not approve the project. “The TERI report died a natural death. On the other hand, the industry has not even agreed to put markings on the lamps stating how much mercury they contain,” says Satish Sinha, associate director of Toxics Link.

No mercury limit in CFL bulbs

In November 2008, CPCB had released technical guidelines for environmentally sound mercury management for CFLs. Although the guidelines aimed at reducing mercury levels using the best available technology, the body did not prescribe an upper limit for the mercury content. As such, there are no legally binding regulations in the country on permissible levels of mercury in CFLs. In India, this is four to six times higher than the standards in developed countries, such as Germany, which permits 5 mg of mercury in CFLs. “In India the mercury content in CFLs is as high as 21.21 mg. Most of the CFL manufacturers are multinationals. If they can adhere to mercury limit for lamps in European nations, why can’t they do it here?” asks Sinha.

Shyam Sujan, secretary general of the Electric Lamp and Components Manufacturers’ Association of India, which represents the CFL manufacturing industry, blames MoEF and the Delhi government for delaying the pilot project suggested by the industry. “We asked the government to set up a treatment facility, but it could not provide us land,” he says.

Sujan adds that several companies have set up their own CFL treatment centres. Phillips India, for example, has set up a facility in Mohali, Crompton has its plant in Vadodara, GE in Bengaluru, Venture in Chennai and Surya in Haridwar. When Neeta came to know of Phillips’ disposal facility, she called up Philips customer care so that all the CFL bulbs she had collected could be disposed of safely. She was asked to contact Philips’ area manager Gaurav Tyagi. He did not respond to her calls.

“We cannot do everything alone and need the government’s help. The ministry has been too slow. Still we have pooled in our resources. Companies now manufacture bulbs with lesser mercury content. For example, a 14-Watt CFL now has less than 3 mg of mercury,” Sujan explains.

An alternative to CFL is Light Emitting Diode (LED) bulbs. These are safer as LED beams neither emit radiation nor contain mercury. They are also more efficient and long-lasting. But they are expensive. While a 14-Watt CFL bulb costs Rs 120, an LED bulb of the same wattage comes for Rs 320. Sujan, however, estimates that with the increase in demand for LEDs, their cost is expected to equal that of CFLs by the end of 2015.