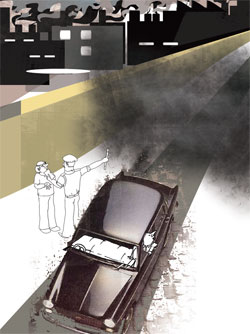 A committee constituted by the Union Ministry of Environment and Forests (MoEF) has issued first-of-its-kind guidelines. They seek to categorise non-compliance of conditions attached to environmental clearances as “serious” and “not so serious”.

They are based on the deliberations of four meetings and analyses of over 200 clearance letters. The MoEF-constituted committee was set up following the recommendations of an expert committee formed in 2009, headed by J M Mauskar, special secretary with MoEF.

Non-compliance with certain general conditions will also be considered a serious offence, such as non-installation of equipments that reduce pollution. If a developer does not comply with the state policy of resettlement and rehabilitation of project-affected people, he can also be termed a serious offender.

Not-so-serious offences have been defined for each of the 26 sectors separately. All the not-so-serious category conditions will become serious in case they are not complied with or rectified within six months. This will be assessed during successive bi-annual inspection reports by the state authorities.

For the mining sector, non-compliance with more than 40 per cent of all the clearance conditions has been categorised as not-so-serious offence. If a project proponent does not concretise roads in mine lease areas or regularly sprinkles water on the roads, he will be termed a not-so-serious offender (see box).


The two conditions have been put in place to control fugitive emissions. Fugitive emissions occur primarily due to poor handling of ores; they are often windblown. At the same time, the guidelines categorise non-installation of two fugitive emission control devices, bag filters and water sprinkling system, as a serious offence. B Sengupta, former member-secretary of the Central Pollution Control Board (CPCB) and head of the MoEF committee, gave reason for the categorisation. “Non installation of bag filters will have greater impact in terms of air pollution. But fugitive emissions, as a result of non-concretised roads, will be restricted to the plant area,” he says. Similar clash exists on the categorisation of parameters like handling and storing of solid waste.

The committee has also given recommendations on actions that should be taken in case of violations. These are similar to the existing ones. The Centre or state government may serve a show-cause notice under the Environment (Protection) Act (EPA)of 1986, irrespective of the nature of the offence. Further action will depend on the industry’s response. Repeated failure to comply will be considered a serious violation. In case of immediate danger to public life and property, a closure order will be issued without issuing any notice. “Immediate danger could be not meeting the ambient air, water or toxic waste standards notified by CPCB,” says Sengupta. Instead of the notice, a stricter penal action with higher monetary fines is needed, says Chandra Bhushan, deputy director of Delhi’s non-profit Centre for Science and Environment.

The aim behind developing these guidelines is that they would enable more effective monitoring of conditions attached to clearances, says Sengupta. At present, ambiguity exists in the conditions. “In addition to the guidelines, ‘model’ clearance conditions should be chalked out that will make monitoring easier and more effective,” he adds. The committee has suggested ways to improve the clearance conditions. They include effective waste management and development of sulphur dioxide standards for thermal power plants.

The civil society has given a mixed reaction to the categorisation. Ramesh Sharma of Ekta Parishad, a non-profit working on land and pollution matters, says, “At present, the authorities do not take action on their own. They work only after the affected people complain.” This is a major lacuna in the system that has not been addressed in the guidelines. “However, if the guidelines are accepted, they will act as a vital tool to nail the government and corporates and making them accountable for pollution,” he adds. Sengupta says, “The categorisation of violations will serve as a guideline for officials who inspect industries.” But this alone would not result in effective monitoring. “Monitoring suffers because of poor manpower. Moreover, the provision of putting the offender in jail is not used, which may have served as a great deterrent,” he adds.

According to Bhushan, the categorisation will give leeway to companies to flout clearance conditions. “They may not take the not-so-serious offences seriously,” he says. To ensure effective monitoring, manpower shortage and management systems in state pollution control boards and MoEF regional offices need to be addressed first, he says. Sengupta agrees. Monitoring needs to be strengthened quickly. As suggested by the Mauskar committee, monitoring should be outsourced to premier organisations like the Bureau of Energy Efficiency and the Indian School of Mines for their respective fields of expertise.

Shilpa Chohan, a Supreme Court lawyer, finds the categorisation surprising. “EPA does not provide for any categorisation of failure or contravention that may have been committed under the Act. It should be left to the court of justice to decide how to penalise offenders,” she says. How can project proponents be let off if they are not complying? she asks. A senior MoEF official says, “We are neutral towards the guidelines. It is the duty of non-profits and the public to comment.” Depending on the comments, the guidelines will be mod ified, adds the official who refused to be named.

The guidelines are open for public comments till December 15.