Single-handedly, 62-year-old Shamjibhai Antala brings water to the arid lands of Saurashtra and reprieve to the villagers 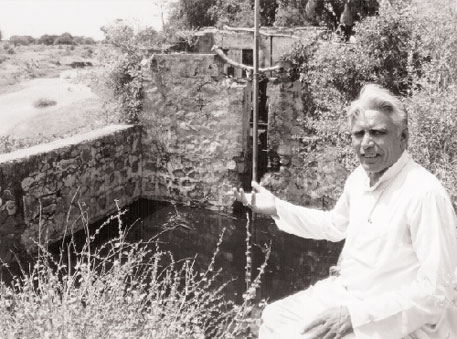 PIED-PIPER of Saurashtra, rainmaker, one-man army, messiah. Revered by villagers, Shamjibhai Jadavbhai Antala, 62, has been given many such names. He has, in more than one way, accomplished the impossible in a land with a history of severe water scarcity, hostile climate and rocky topography.

A resident of Dhoraji, a nondescript town 25 km downstream of the river Bhadar in Saurashtra, Gujarat, Shamjibhai has been working not only to ensure that fields remain green but has been teaching the local people the importance of rainwater harvesting. He shot into fame for raising a voice against the polluting textile dyeing and printing units in Jetpur, upstream of Bhadar.

In 1997, after a relatively long struggle, the Gujarat High Court ordered closure of nearly 200 industrial units until proper effluent treatment plants were installed.

For a living, Shamjibhai undertook many odd jobs, the last one being that of circulation manager for Phulchhab, a Gujarati newspaper, until his retirement in 1997. It was during his several trips to the villages across Saurashtra as part of his commitments to the newspaper that he was moved by the plight of the people. A hostile, parched land with no perennial river for subsistence, where the farmers were forever praying for rain.

This scarcity was further compounded by the severe drought of 1984 that stretched over a period of nearly four years. Further, the only river — Bhadar — that passes through the village was severely contaminated making the water unfit for consumption and irrigation. “It hurt me to see those desolate faces waiting for reprieve,” recalls Shamjibhai.

On one such trip, he saw a farmer diverting excess rainwater into his nearby well. “This set me thinking for a few days and I decided to do something about it,” he says. Shamjibhai decided to concentrate on rainwater harvesting. He set up the Saurashtra Lok Manch (SLM), a non-governmental organisation, in 1989 along with a close friend and associate Natwar Singh Chauhan. The focus was on water conservation, hence the project was named Rashtriya Jal Sanchay Abhiyan.

“Initially, I did a lot of field work single-handedly. I used to talk to people about the possibility of raising the groundwater level,” he says, adding: “Most of the villagers found the idea bizarre so I started explaining to them through charts and diagrams how it could be accomplished and that it was nothing new. It was practised in the earlier days, but perhaps people had forgotten about it.”

Meanwhile, Shamjibhai also enlisted the support of leading local religious heads in order to spread the good word about rainwater harvesting. “In a land steeped in religious beliefs and traditions, anything that has a religious sanction or endorsement gets off to a better start,” says Shamjibhai. Thus, he approached two prominent priests and “the saffron-clad messengers effectively disseminated information about the project and warned the people of doom if the villagers ignored the problem”.

In addition, Shamjibhai organised a Jal Sanchay Yatra (water harvesting rally) in 1997 in the villages and started attending all the samhu lagans (mass marriages), where he held small meetings to apprise people about the project. “Finally, things started happening. When villagers saw the results, there was no stopping them,” he says. Through a system of trial and error, new and better ways best suited to the area were adopted.

In addition to collecting rainwater, the villagers started creating dunkeys (canals to divert the excess rainwater to the base of handpumps) and diverting riverwater in the peak season to several wells to raise the groundwater table. “I do not profess to be a water management expert. The materials were easily available and all we required at the most from the market was cement or nine-inch diameter pipes,” says Shamjibhai.

Getting better with time

Ten years later, the programme to recharge wells has transformed the area, with people convinced of their own power. There is a realisation that it doesn’t always pay to keep waiting for a reprieve — from the government or nature. Of the 700,000 open dug wells, SLM has helped the farmers recharge half of them.

The villagers have been able to grow more and earn more. Their economic status has improved and social conditions are better, especially for the women, as they are the ones who prodded the men to adopt the technique once they understood the benefits. “Work that is aimed at improving the life of farmers always spreads like wildfire. Today, not only is the message spreading, it is improving with time,” says Shamjibhai.

Where the government is concerned, initially there were a lot of hurdles, he says. Once our work picked momentum, government officials started a propaganda about giving subsidies to the villages, which proved detrimental to the project. Instead of spending their own money, the villagers waited for government funds. But when none came their way, they realised it was just false propaganda.

“In order to make the project viable, I asked the people to spend money on their own,” says Shamjibhai. The villagers were hesitant but once they realised that Shamjibhai did not have any vested interest in the project, the money started coming in. Barring a few well-wishers who donated money for the initial expenses — printing of pamphlets and brochures to spread the message — no institution was requested for financial support.

As the local people were involved in the project at every stage, there was a lot of enthusiasm and participation to make it successful. Asked about the success of the project, Shamjibhai points out: “I would say the success rate is almost 100 per cent, though work is still progressing. But I count the success rate by the awareness level of the people and not just by accomplishment of the project. If that was the case, then all government schemes would have been successful.

What is important to me is giving power to the people so that they feel energised enough to take care of their own lives without external help.”

The project to recharge wells is spreading to neighbouring states of Madhya Pradesh and Rajasthan and as far as Orissa, too, while people of Dhoraji have vowed not to rest till they accomplish the task of replenishing the depleting groundwater table. “Today, I feel more charged than ever before. There is little time to lose and I am convinced that if our efforts are channelised in the right direction, every well in Saurashtra will be full of water,” he says.

Shamjibhai’s work has been studied by experts from all over the country as well as abroad. And though he does not profess to be an expert in the field, he says he has practical knowledge of the issues concerned. He has presented several papers at seminars and organised workshops and throughout India.

His future plans include taking out a national rally on the lines of the 1997 Jal Sanchay Yatra to create awareness about the necessity of recharging groundwater across the country.