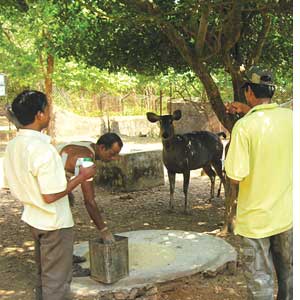 The day in the Nandan Kanan Zoo begins at 8 am with two veterinary doctors and the keepers making rounds of the animal and bird enclosures, administering medicines and vaccines where required. Health records of the animals in each enclosure are maintained in separate registers. The vets sign them with their observations and remarks.

The routine is as regimented as patient-care in a hospital. The assistant veterinary surgeon makes another round in the afternoon to check the animals and birds for stress and symptoms. If an animal is found sick, its condition is monitored through the night by the senior veterinary officer.

The meticulous healthcare routine followed by the zoo is reflected in its declining mortality rate. Statistics show animal mortality in Nandan Kanan has reduced from 90 deaths in 2004-2005 to 44 in 2008-2009.

"The mortality rate last year was 3.1 per cent, much lower than the national average of 10 per cent," said zoo director Ajit Pattnaik.

Nine years ago, the animals were not so well cared for. Ten tigers died in July 2000 of trypanosomiasis, a disease that causes lethargy and weakness. Stinging flies spread the parasites that cause the disease. The tigers ran high fever, became weak, stopped eating, and died within a few days of one another. The incident made front-page headlines in all national dailies; environmen-talists accused the zoo authorities of negligence.

The tiger deaths proved the turning point. In 2002, the Centre for Wildlife Health was set up in the Veterinary College of the Orissa University of Agriculture Technology, Bhubaneswar, with initial funding from the Central Zoo Authority. The centre helped the zoo develop a healthcare system that emphasizes parasite management. "Preventing infections caused by parasites is the most important aspect of healthcare in a zoo. It helps evolve a protocol for de-worming and keeps the animals free of diseases," said Niranjan Sahoo, the centre's coordinator.

The animals are checked for ticks, lice, fleas and mites. These parasites live on the blood of the animals and transmit diseases. Parasites like roundworms, tapeworms, and hookworms that enter the digestive tract through food are removed with de-worming medicines. The animals undergo routine stool tests. "Roundworms are transmitted through faeces. The parasite larvae survive in the soil and infect other animals," Sahoo explained.


A researcher from the centre visits the zoo every day at 7.30 am to collect the faecal samples when the animal and bird enclosures are cleaned, said Manindra Nath Bharati, one of the researchers. The samples are tested in the laboratory. Once the parasite is identified, medicines are fed to the animals and tested for their efficacy. "Animals of the same species in different enclosures are given different medicines. Their comparative effect is again ascertained with stool tests to check for parasites. The drug that kills the parasites the fastest is recommended for de-worming and given to the animals thrice a year," said Sahoo.

The vets have also hit upon a simple solution to keep infections at bay. In the enclosures housing lions and tigers that are more susceptible to infections caused by parasites, the top six-inch layer of the soil is removed to cleanse the area. "This yielded results. There were no infections for three months at a stretch," said Sahoo. He said soil from these enclosures is removed at regular intervals now. Senior veterinary officer with the zoo, P K Roy, said the technical assistance provided by the university has helped the zoo develop its own de-worming and vaccine protocol. The dates for giving de-worming medicines and vaccines and for spraying disinfectants are fixed in advance and followed strictly (see box). The enclosures are sprayed with disinfectants to kill the parasites, bacteria and other germs. The regular weeding, cleaning has made the enclosures free of the odour one normally finds in other zoos.

"There hasn't been a single death due to trypanosomiasis since 2000," said Roy. Only one case of infection has been reported since then. Manish, a tiger cub aged one-and-a-half, was looking listless and collapsed in his cage earlier this year. Diagnosis was quick and he was treated. Manish is now as frisky as other cubs his age.


The health regime enforced in the zoo extends to the food and water given to the animals. Instead of sourcing meat from the city slaughterhouses, the zoo has its own slaughter facility. The animals are checked before and after slaughter for possible diseases. Blood smears from slaughtered animals are examined. Only meat from healthy animals is served.

Plant-eating animals like elephants and mithuns (Bos frontalis), a bovine species found in the Himalaya, get home-grown fodder from the 31-acre farm on the zoo premises. This reduces chances of anthrax and foot-and- mouth diseases, officials said. All animals get chlorinated drinking water.

Officials say the new regime has improved the health of the 1,416 zoo animals. Till now Nandan Kanan was known for its large tiger population. Officials hope the zoo will now earn a name for its model healthcare system.