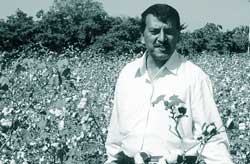 B M Khadi is a shy -- almost reclusive -- cotton scientist at the Agricultural University, Dharwad, Karnataka. But even a stray remark on the need to find substitutes for environmentally-dangerous dyed fabrics is enough to break his reticence. "We have heard stories of chemical dyes playing havoc with our rivers and water systems. It is imperative that we find alternatives," he says. Since the last three years, Khadi and his team of scientists at the Agricultural University's Cotton Research Centre at Hebbali (near Dharwad) have turned their energies on developing brown coloured cotton -- the Dharwad Desi Coloured Cotton (ddcc-1, G ossypium arboreum).

Studies conducted by this team has shown that ddcc-1 is best-suited for rain-fed areas in Karnataka, such as Dharwad. The crop matures in 170-180 days and yields 800-1,000 kilogrammes (kg) per hectare (ha). Conventional cotton, in contrast, yields about 600 kg per ha. ddcc-1 has a ginning output of 30-32 per cent, which is also higher than that of conventional cotton.

The coloured cotton was produced with painstaking effort. First, genes of the brown cotton were inserted into the white variety to create ddcc-1. Khadi and his team then washed the processed product twenty times -- with a variety of soaps -- in order to make sure that the lint retained its almond colour.

Today ddcc-1 is grown by 60 farmers in around 70 ha of land in Dharwad. The local Khadi Gramodyog buys back the crop from the farmers. This arrangement works well for the agriculturists, since they are paid about 25 per cent more than what is paid to farmers who grow conventional cotton. According to Khadi, ddcc-1 fields have to be at a 50 metre distance from the white cotton farms in order to avoid contamination by the conventional variety. Before every sowing season, scientists of the agricultural university personally supervise that farmers keep this distance.

Khadi and his team are now developing blue cotton -- a variety much in demand from makers of jeans. The Dharwad scientists draw much inspiration from the work of the entomologist-turned plant breeder, Sally Fox. Since 1982, this resident of Arizona, usa, has bred pink, yellow, reddish brown and bluish green varieties of cotton. These lints have been commercially marketed as Fox Fibre, registered by the Natural Cotton Colours, Inc, Arizona, usa .

Unlike their us counterparts, the Dharwad Agricultural University scientists have not got their product patented. Says Khadi, "The work of the Cotton Research Station is meant to guide cotton growers and not to get into the corporate agenda." But the fact remains that like the Council for Scientific and Industrial Research laboratories, the Agricultural University scientists must patent its products and plough back the profits into further research and development. The university should also not forget that it is up against multinational giants such as Monsanto. Patenting will also help the Cotton Research Centre tide over it's resource crunch -- the institute has not had much funding from the Indian Council for Agricultural Research or any other government agency.

The prospects of coloured cotton appear bright because it is untainted by biotechnology. This is because the country-wise quotas on cotton imports, imposed by the us and uk , have ended. All this augers well for the natural cotton growers of Dharwad. But according to economist, Arvind Panagariya of the Colombia University, usa, "India has failed to become a part of the global production chain (of cotton)." This in spite of the fact that textiles and clothing account for nearly 40 per cent of our manufacturing output.

So, shouldn't cotton scientists such as Khadi pick up the gauntlet and link cotton growers to apparel manufacturers and traders?

Manu N Kulkarni is a trustee of the Bangalore-based non-governmental organisation, Hope Foundation