Not merely a numbers game

Although the recently held world population summit emphasised population control in the developing countries as the main block in the path to development, some delegates held the consumption patterns of the developed countries responsible for the problems.

Not merely a numbers game 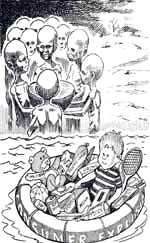 THAT THE world's population problem is not merely a numbers game, was the view expressed by most delegates attending the Population Summit of The World's Scientific Academies, held in New Delhi from October 24-27. The summit statement's emphasis on reaching "zero population growth within the lifetime of our children", therefore, disappointed many scientists, especially those from the African Academy of Sciences.

The meeting was sponsored by 15 of the world's leading academies, including the Indian National Science Academy, the Royal Society of London, the US National Academy of Sciences and the Royal Swedish Academy of Sciences. According to conference coordinator Susan Spibey, the summit grew out of concerns expressed at the Conference on Population, Natural Resources and Development, organised by the Royal Swedish Academy in 1991, and the joint statement made by the British and the US academies in 1992, titled Population Growth, Resource Consumption, and a Sustainable World.


This background enabled the scientists to quickly settle down to business after Michael Atiyah, president of the Royal Society, expressed the homily of "cautious optimism". Nafis Sadik, executive director of the UN Population Fund, was also optimistic in her inaugural address, and described the achievements of the population control programmes since the early 1960s as "truly impressive". She pointed out that the number of births per woman had declined from over six in the early 1960s to less than four today.

Nonetheless, Sadik warned that even the most optimistic UN estimates predict the world's population would rise annually by 93 million through the next decade. Most of this growth, she said, would be in the developing world because the population of the developed countries, currently at 1.2 billion, is expected to grow to only 1.3 billion.

"I cannot be too strong in saying that unless we develop and popularise family planning programmes adequately tailored for a comprehensive range of specific requirements, we have no hope of meeting the world's development needs in the next century," she said.

However, Kerstin Kiessling of the Royal Swedish Academy and Nathan Keyfitz of the International Institute of Applied Systems Analysis in Austria disagreed with her that the high population growth rates of developing countries were a major impediment to the world's development. In their paper, The Population Debate: Urgency of the Problem, they said they felt the problem lay more with the high consumption levels in the developed countries.

Said Kiessling, "Given this trait of Western populations and its environmental impact, the industrialised world is endowed with a population problem as ominous as that of the South." This found wide acceptance among the audience. Said Olga Vershinskaya of the Russian Academy of Sciences, "The immediate future of the ecosphere would depend mainly on the extent to which people in the developed world succeed in changing their overall pattern of life."

The general subscription to this line of thought was indicated by the interest shown by participants in the session on Population and Environment -- The Scientific Evidence. The most notable address of this session was by Norman Myers, visiting fellow at Oxford University, who emphasised the impact of human activities on the earth's biodiversity and its implication for future generations.


Myers said the most significant factor was the consumption rate of populations. He complained that not "a single developed country has formulated its population policy within the context of environmental linkages overall", though they contribute much more than developing countries to the build-up of ozone-depleting substances and carbon dioxide in the atmosphere.

According to him, there is scientific evidence to indicate that human activities around the world were entering an "unprecedented phase of mass destruction of other natural species". Currently, 2 per cent of the world's forest cover is being lost every year, he pointed out. At this rate 50 per cent of all existing species would be lost by 2050 he said.

The audience listened with rapt attention as Myers elaborated upon the implications of this "biotic debacle". The loss of so many species would result in critical disruptions in the evolution process itself, he explained. Even if substantial ameliorative measures are taken, complete biotic recovery would require at least 5 million years -- 20 times as much as the history of human life itself. According to Myers, such action would mean taking a decision that would affect at least the next 200,000 generations. However, he also warned against the construction of simplistic population-biodiversity models, and said that variables such as inefficient agriculture, poor land-use planning and inappropriate technology in the national context, as well as debt, aid, trade and the North-South relationship must be considered.

The realisation that effective population policies would be marked by complex considerations was carried into the theme of gender as well. Partha Dasgupta of Cambridge University pointed out that except for parts of east and Southeast Asia, modern-day declines in mortality rates in developing countries have not been matched by reductions in fertility. He said this was because of the inability of present-day population policies to go beyond the physical aspects of widespread administration of contraceptive devices. "Such policies," he said, "ignore the fact that population growth is determined by a combination of opportunities, human motivation and chance."


Dasgupta reiterated that in poor countries, "children are also useful as income-earning assets". He pointed out that the bulk of the population in countries like India and those of sub-Saharan Africa, are biomass-based, subsistence economies, where rural folk eke out their living directly from plants and animals. Labour productivity is low in such economies because capital and environmental resources are scarce. "Children are required continually as workers by their parents even when the latter are in their prime," says Dasgupta, "and small households are simply not viable."

The use of only family planning programmes to stabilise populations is thus ruled out, he said, adding that poverty alleviation programmes need to be given far more attention, in order to achieve lower fertility rates in the rural areas.

Delegates from African countries agreed the efficacy of family planning programmes could be increased by changing decision-making structures within the family. Lydia Makhubu of the University of Swaziland drew attention to the woman's traditional role in the provision of basic needs for families all over rural Africa, as well as their critical role in communities adopting to a different culture. She asserted that better education, health and economic opportunities for African women were essential for controlling Africa's burgeoning population.

Because of the enthusiastic endorsement of these views, the participants were not overly worried about the existing state of contraceptive technology. Herman Bondi of Cambridge University summed up the prevalent mood saying, "In the field of population growth and its containment, it is inevitable that individual choices will decide the final outcome. Science can only help these choices along with a range of other support services. It can never dictate a choice."

What attracted more controversy in comparison was the statement issued at the end of the conference. Many delegates felt the statement had far too many generalisations and did not portray the social, cultural and economic diversity that would have to be addressed by good family planning programmes. Natalia Rimashevskaya of the Russian Academy of Sciences said the statement must incorporate the point that no uniform set of strategies could succeed in countries as large as hers.

But the statement was opposed most by the African Academy of Sciences, which felt it did not adequately reflect the concerns of the Third World. Said H W Okoth-Ogendo of the University of Nairobi, "The statement pays far too much importance to the acceptance of the target of zero population growth rate. In stark contrast, not a single target to improve the quality of life for the world's people was talked about."

The African delegation subsequently released its own statement, reiterating they regarded their country's population as an essential component in resource generation and development. The statement said its mainline counterpart was "an approach that places demographic variables at the consumptive end of the population/natural resource equation, ignores the most important lesson of history, namely, that it is to their people that nations must look for the establishment of development thresholds".