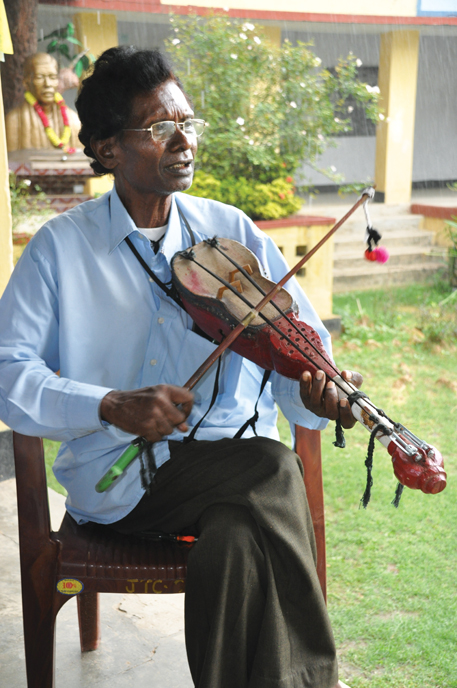 They tune their lute and begin on cue. Sitting under a large mango tree on the premises of a school in Jaher Than, the sacred grove of the Santhal tribe, three elderly men play the banam (fiddle or lute), filling the ambience with music.

Kinhu Suraj Tudu, Pradhan Hembrom and Salkhan Soren sing a song in Santhali, but the language is no barrier to getting lost in its rhythm. Raindrops and the chirping of birds add to the melody, while two children run around pillars playing hide-and-seek.

Hembrom and Soren are in their 70s, while Tudu is 80. Tudu is the senior-most and is called guruji. The trio teaches banam and other traditional instruments at Jaher Than in Karandih block of Jamshedpur, Jharkhand. Born and brought up in Santhali families, music and dance were part of their daily lives. As Tudu points out, of the 14 musical instruments the tribe plays, banam is much revered.

Tudu began playing the banam as a teenager along with Pandit Raghunath Murmu, a stalwart Santhali playwright and creator of the Ol Chiki script of the Santhal tribe. “Everyone played it. The banam is so old that we cannot even begin to trace its history,” says the former employee of Tata Steel.

According to legend, seven brothers once conspired to kill and eat their sister. It so happened that when she was cooking, she accidently cut her hand and a few drops of blood fell into the food. The food turned out to be very delicious, so the brothers thought that she would make a tasty meal. When they had killed their sister, the youngest brother was full of guilt and could not bring himself to eating his sister’s meat. He took his portion and buried it in an anthill. Later, a beautiful tree grew in its spot. One day, as a man was passing by, he heard music coming from the tree. Out of curiosity he cut some wood from the trunk and made a musical instrument out of it, which later came to be known as the banam.

Among the Santhals, a key instrument is played in every festival. For instance, during the Sohrae festival observed around Diwali, the banam and the tirio (flute) are usually played. During the Baha Purab, the flower festival celebrated in March during Holi, the banam and tirio are accompanied with the maadal, hand drum similar to the dholak, and dancing. 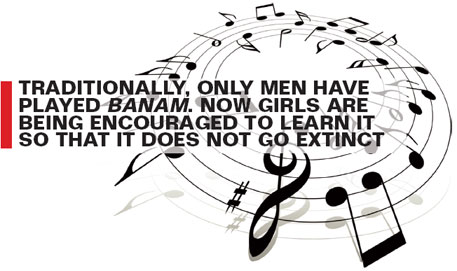 The banam looks like a violin and is played with a bow. The instrument has different versions. It is usually made of the light and durable wood of the Gulanj baha plant (Plumeria acutifolia), a common ornamental flowering shrub. The hollow wooden sound box in the banam is covered with animal skin—either of chameleon or goat. “Chameleon skin is preferred as it remains tight and does not get soggy during the rains. While we use domestic goats, we capture the chameleon from the forests,” explains Hembrom. The skin is pinned to the sound box traditionally with handmade wooden pins, which are now being replaced with pins available in the market.

Hembrom, who retired as a driver with Tata Steel, is the head mistry in the group and makes and supplies banams. He uses a double-stringed banam, its strings made of horse’s hair.

“I tinkered a bit with the design of the instrument, which was originally single-stringed. Two strings help hit the high and low notes properly,” he explains. The bow, too, comes in interesting shapes. His is made of the crooked handle of an umbrella. The bow can also be unscrewed and folded to fit into the cloth bag that carries the banam.

It usually takes 8-10 days to make one, and the work requires concentration, for the strings have to be carefully aligned. Each part is crafted by hand, thus, every instrument is unique—some have bigger sound boxes; some have smaller ones; the sound holes are sometimes on the front of the instrument’s neck and sometimes at the back. There are slimmer, less bulky versions, too. Then there is the huka banam, a single-stringed banam made from coconut shell.

Soren believes that the banam today is at the risk of being edged out by modern instruments, like the keyboard and guitar. “To keep our tradition alive, the younger generation will have to learn to play it,” he says.

Some 20 years ago the instrument was innovated to accommodate an electronic output source to connect it to a loudspeaker. But it was rarely used as musicians preferred to use the traditional banam. It is only since the past four-five years that banams that can be fitted to loudspeakers are being used more as this helps draw attention to the instrument during stage shows and ceremonies.

During the last few months, Soren has had the chance to play the banam in Delhi, Bhopal and Thiruvananthapuram as a part of a Santhali theatre group. They performed a play called “Fevicol”, based on the issue of displacement of the tribals and scripted by Jeet Rai Hasda, a native of Jamshedpur and graduate of the National School of Drama.

“Tirio is also being taught in the classes which we have started at Jaher Than from last year,” says Biren Ramesh Bhuta, chief of the Corporate Sustainability Services of Tata Steel. This is an attempt to save the traditional musical instruments and to create an interest in the younger generation.

The cost of making the banam is borne by Tata Steel. A banam costs nearly Rs 1,500. “We advertise the classes through word of mouth during shows and in our locality. The response has been good so far,” Soren says.

The classes are attracting not just Santhalis but students from other tribal and non-tribal communities as well. Apart from school and college students, there are a few professionals.

There is no special curriculum for the classes and neither is there any schedule. “It’s tough to learn to play the banam. A student may take at least seven-eight months to just get a hang of it. This needs patience,” they add.

They have known each other for the past 30-40 years—their place of work and passion for music being the common thread. They are sometimes torn between modern songs—not something they approve of but have to play on popular demand—and traditional music, but are willing to accommodate as long as it is for the cause of the banam and folk music.

The banam is designed in the shape of the female body, and as per tradition, only men have played the instrument. Even Hembrom’s five daughters did not learn it. “Now we are encouraging young girls to play the instrument to save it from extinction,” he says. “We don’t want the banam to be a product of display in the museum.”