A programme implemented in central Kerala shows how an illness can be controlled if the community is involved. 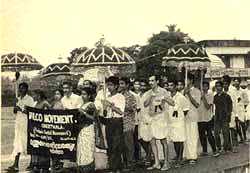 COMMUNITY participation can work wonders when it comes to tackling diseases too recalcitrant to be curbed effectively by medical science alone. A fine example of this can be found in the Shertallai region in central Kerala, where the Pondicherry-based Vector Control Research Centre (VCRC) successfully involved the people in an experiment to curb pandemic filariasis.

The innovative strategy was based on a filariasis control programme in Pondicherry that was successful during tests, but could not be implemented because the people did not participate in it.

The area around Shertallai -a narrow, 300-square- km stretch of land in Allepey district, sandwiched between Vembanad lake and the Lakshadweep sea-has been a centre for Malayan filariasis for several decades. The region's high groundwater table, with more than 400 canals and nearly 75,000 ponds, all thickly infested with water weeds, make it an ideal breeding ground for filariasis.

The disease is caused by a roundworm, Brugia malayi, which is transmitted by mosquitoes that breed in the ponds and canals. The mosquitoes lay eggs beneath the leaves of water weeds and, subsequently, larvae cling to roots of the weed.

However, the weeds are now used as green manure for coconut cultivation, which is a major source of income in Shertallai The weeds also help to remove organic pollutants and are believed to keep water cool. Recent efforts at combating the epidemic failed because of the reliance on pesticides to control mosquitoes in the area. A more effective way would have been to control the growth of the water weeds, which aid the breeding of mosquitoes.

The VCRC conducted a study in 1986 on the socioeconomic impact of the disease in the area, which has a population of 4 lakh. The findings of the survey were horrifying, says VCR social scientist Ambili Kumar. Though not filtal, the disease proved to be a social handicap. The deformity caused by filariasis affects the earning capacity of the people and there have been cases where victims have been Socially boycotted. Interestingly, despite the high literacy rate in the area, there were several misconceptions about the disease, among them that filariasis was a hereditary disease and the swelling of the foot was caused by walking barefoot on hot sand and then dipping one's feet in cold water.

In 1987, the need Was felt to involve the Community in the filariasis Control programme and the Filariasis Control Movement (FILCOM) Was initiated to educate people about the disease. House-to-house visit were made by volunteers to make people aware of cause of the disease and an intensive health education campaign was introduced in local schools and colleges. The thrust was put on message-through-folk-art. It also coined slogans .such as, "It is not the leg which should be chained but the disease" and "Taking health to the people". Messages were disseminated through catchy phrases, cartoons, wall Posters and hoardings. The drive heightened the participatory consciousness of people and this was reflected in the heavy turnout for the recently-held elections for FILCOM office-bearers.

FILCOM's first step was to de-weed ponds and canals, which was done by the People including schoolchildren. But the large-scale de-weeding drive triggered complaints of loss of manure. The sunhemp plant was introduced as a substitute for weed manure. FILCOM also suggested starting fish farms in the ponds and canals, a proposal that was lucrative enough to the readily accepted by the people. Fingerlings of fast-growing edible species, including those that consumed the weeds, were distributed free and today, more than 10,000 ponds in the area are used to breed fish. The National Bank for Agriculture and Rural Development took over the flourishing pisciculture programme and earmarked Rs 57 lakh for loan-seekers in 1989-91.

FILCOM activists have undoubtedly played a crucial role in bringing about better health environmnet and enhancing economic prosperity in the area. FILCOM, whivh started with seven menmber-organisations and 300 activists, now has 96 member-bodies and 10,000 volusteers. FILCOM has so far held 138 health education camps, 30 orientation camps and eight general health camps. Today, more than 200 skilled volunteers are working at 75 permanent filariasi detection and treatment camps. More than 46,000 people have been examined and 406 cases have been treated.

Mosquitor density has plummeted by 84 per cent and the proportion of carrier mosquitoes has dropped by 63 per cen. The starp decline in the incidence of the disease is primarily due to two innovative ideas: vector control linked wiht income generation and health education coupled with mass treatment.