Down To Earth gauges the ground reality before assembly elections 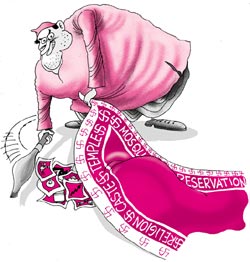 The stage is set for the December 1 assembly elections in Delhi, Rajasthan, Madhya Pradesh and Chhattisgarh. Coming after a healthy monsoon that was preceded by a severe dry spell, the polls offer parties the perfect platform for articulating their stand on matters concerning development. A Down To Earth (dte) team fanned out to the four states to assess first-hand whether there was indeed a shift in political mindset in this direction. It found that save for the customary lip service to real issues such as participatory governance, the level of political discourse was shallow and divorced from reality. These are ominous signs, considering that the ensuing assembly polls are being seen as a dress rehearsal for the next general elections.

Politicians like Hari Shankar Bhawda, a bjp leader and former deputy chief minister of Rajasthan, make no bones about following the agenda of expediency. Bhawda's belief is that there are two kinds of issues -- administrative and political. While putting health, education and the environment in the former category, he reserves the caste card for the latter. This, in effect, implies that people's issues and politicians' concerns are mutually exclusive.

Ironically, electoral fortunes in Rajasthan are hinged on the caste plank. "The drought that had left the state parched may actually work in favour of incumbent chief minister Ashok Gehlot, as he has revised and expanded relief schemes. But the caste equations matter a lot more," observes analyst Mahesh Rangarajan. dte's findings bear out this trend.

"The political establishment tends to use any issue to garner votes," notes J S Chhokar, professor at the Indian Institute of Management, Ahmedabad. Ilina Sen, a senior social scientist of Chhattisgarh, concurs adding: "As a result, problems pertaining to forests, water, food security and tribal rights do not find a place on the political agenda." According to the feedback received by dte, development and environment do figure in parties' manifestos in this state. But as schemes, not issues.

Neighbouring Madhya Pradesh has not witnessed any significant new initiative since 1998, assert experts. According to them, there has only been a consolidation of existing programmes, particularly with regard to decentralisation. Furthermore, land redistribution and reservation policies of the state government point to a politicisation of social divisions. Not only do recent measures smack of populism, the party in power has even shed its inhibitions about the opposition's ideology. dte has discerned that flaws have started surfacing in the devolution schemes too.

Delhi's case is different. "The Sheila Dikshit regime can point to a serious record of governance, be it the introduction of compressed natural gas, construction of flyovers or privatisation of power. These steps show that the government means business," points out Rangarajan. dte's understanding is that a strong feel-good factor prevails in Delhi.

"It bodes well for the capital that water is also being taken up as an issue. Because improving the quality of water would improve the environment as a whole," avers Yogendra Yadav of the Centre for the Study of Developing Societies. The Bhagidari programme, which envisages the people's role in governance, deserves mention as well, adds Yadav.

Rangarajan sums up the matter thus: "Development issues make a huge difference in assembly polls. Few state governments have returned to power in the post-1989 period. The ones that have managed to do so are largely those which have delivered on specific welfare and development planks." But for parties hitting the campaign trail, it's realpolitik as usual.

Read on for the state-wise lowdown.