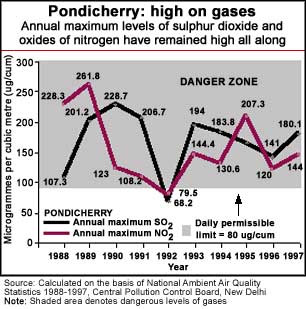 One of the most densely populated areas in India, the union territory of Pondicherry has 1,642 persons per sq km. Its air is also one of the densest in the country (see box: Unclean air). In 1997, the maximum levels of both spm and so2 were about three times the permissible limits, while that of nox was more than two times the permissible limit (see graph: Pondicherry: high on gases). Pondicherry is one of very few cities - and the only one among the Down To Earth case studies - where the maximum levels of all the parameters were way above the safe limit in 1997. And this has been the pattern since monitoring started in 1988.

Industrial growth has been totally unregulated in Pondicherry and its industrial policy was declared for the first time only in 1997. By then, considerable damage had already been done. As of September 1998, there were 6,038 industrial units in Pondicherry, of which 136 are in the large- and medium-scale sectors. The government has declared a number of sops for industries to be set up here. But several newspaper articles began questioning the environmental impact of this "open-door industrial policy". Now, licences to establish industrial units in the area are not being given anymore, says U Sridharan, director of the department of science,technology and environment.

However, according to C B S R Sharma of Pondicherry University's Salim Ali School of Ecology and Environmental Science, air pollution is most frequently caused by automobile exhaust. The number of vehicles registered in Pondicherry has almost doubled from 79,748 in 1991 to 152,719 in 1998. In the same period, the number of vehicles for transport of goods, which mostly run on diesel, almost tripled - from 1,794 to 5,000. Not surprisingly, air pollution has also increased. What makes the situation worse are malpractices such as adulteration of fuel. There are reports that auto-rickshaw drivers purchase kerosene from the black market to mix with petrol in order to save money.

Rather than work out measures to control air pollution, the Pondicherry government has clearly been too busy trying to make room for industry. A remark by Shivamani, an officer at the directorate of industries, speaks volumes about this. The government, he said, is interested in bringing in more industries and not in finding fault with them. With government officials showing such abject lack of concern for the environment and public health, hope is slim if you are a resident of Pondicherry.