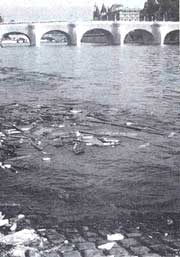 France has 58 million people living in 22 regions, 96 departments (counties) and 36,000 municipalities, varying in population size from 100 to 2 million. Two-thirds of the municipalities have less than 500 inhabitants and so several municipalities are grouped into boards to deal with, for example, management of water or transport or, into districts with their own budgets and in charge of activities common to municipalities. These organisations usually plan policy for town and county.

The government is responsible for issues like water management or coastline protection with various laws and does this through its national environment policy plan. The government is represented in each department by a prefet, whose job is to ensure that check if city authorities and industrial firms abide by the plan.

Since the law on decentralisation was passed in 1982, city authorities have greater powers to manage their environment. The chief source of power is the plan of land occupation, which assigns planning to the local mayor. Within regions and departments, there is usually a power struggle between county councils and regional councils on the one hand and government officials and bodies such as the prefet's office or state industrial and health services, on the other.

When government sanction is sought for environment-threatening projects, towns are asked to give their views. But the prefet makes the final decision, based on whether the project is in accordance with the required standards. Should there be any disagreement, the government acts as arbitrator. Action groups are allowed to sue offenders who violate ecological standards.

Unfortunately, local authorities do not function very democratically. A local community can make its views known at public hearings, but local leadership is generally of poor quality. Town mayors enjoy great power and their decisions are rarely questioned. It is imperative that local environmental groups develop their own watchdog mechanisms to provide a counterweight to the mayors.

In many areas, however, such action groups do not exist and even where they do, they can only urge the prefet to respect the rules. Such urging becomes necessary when the prefet doesn't always have the means or the will to enforce regulations, especially when confronted by a prominent and powerful local political figure. However, some of these action groups have set a valuable precedent by petitioning administrative tribunals for a judicial enquiry.

One such action group is Eaux et Rivieres (Water and Rivers), which has been fighting consistently for a water quality policy in Brittany, where water sources are being contaminated by some industries and by intensive pig farming, which sends large quantities of pig manure into local rivers. Since its inception in 1987, Eaux et Rivieres has initiated 400 legal actions and won 95 per cent of them. The environmental group also participates in consultative bodies of government and informs breeders and the people in charge of cooperatives.


Applications for siting an industry must be submitted for a public enquiry. The environment impact study is made available at the town hall for public comment. But frequently, this enquiry is announced in a very discreet manner and it takes place at a time when most people are on vacation. Based on what has been written in the study, a commissioner gives advice and the prefet usually follows it, though this is not required because what is important is the people's response to the proposed project. Everything in effect depends on the local balance of power.

In Brittany, major power projects dependent on uranium mines have been rejected because action groups worked successfully with the local population and managed in some cases to block public enquiries on the project.

Eaux et Rivieres' major victory involved forcing the government to modify a decree on water quality. The group complained to the Council of State that the government had not respected European Community standards. The group has also promoted a river contract for improved water quality on the Scorff, one of the rivers supplying water to the town of Lorient.

Alain Le Sain is an environmentalist-writer who lives in Lorient, France.