Madhya Pradesh set out on a generous note. The state’s 1990 JFM resolution promised 20 per cent of the net profit from the felling of timber to forest protection committees in case of dense forest and 30 per cent of the net profit in the case of degraded forests. In 2001 in an unprecedented move, the government promised the committees the entire net profit from timber and bamboo in degraded forests. The new mechanism also laid down that half the money will be distributed among the members, while the rest will be used for forest and village resource development. Such an attractive proposition drew 16 million people into forest conservation and today 70 per cent of the state’s forest is covered under JFM. 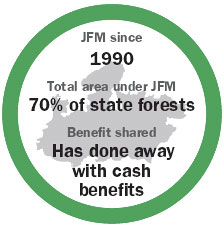 “The resolution is just a vision. JFM operates according to the orders issued by the department,” says R N Saxena, the state additional principal chief conservator of forests. Had the forest department shared cash benefit with participants it would have caused it some embarrassment. It has ploughed Rs 28.4 crore into the forest protection committees this year as their share from timber and bamboo sale. Were it to distribute this amount among participants, each person would have received Rs 18. In the past 20 years, Rs 164 crore has been distributed as bonus to the committees.

“The forest department has deliberately not distributed the amount among the members. If they did so, the disparity of benefit sharing would have been exposed,” says Anil Garg, a researcher on forest issues based in Betul.

Promises made in the 1990 resolution on sharing income from the items of nationalised minor forest produce too were not kept. Instead, communities’ right to use forest produce, called nistar, has been systematically eroded. Nistar was admitted as a right in the revenue records of the state. Subsequent enactments regulated it as privileges. JFM resolutions diluted these privileges to concessions or favours subject to the availability of the material. The present JFM resolution makes entitlement to nistar subject to the discretion of the divisional forest officer (DFO).

In fact, all the benefits from JFM are subject to the approval of the DFO. Every year, the forest protection committees have to get a certificate from the DFOs saying they have done satisfactory work to avail the benefits. “The process is so undemocratic that if the DFO decides not to give benefit to a committee, there is no way the committee can corner him to show that they have done satisfactory work,” says Madhu Sarin of Campaign for Survival and Dignity, a non-profit working for tribal rights. Small wonder it takes years and frequent rounds to the DFO office to get the certificate of work.