On a single day in 1731, more than 350 persons -- 69 of them women -- sacrificed their lives to protect their trees from being felled in Jalnadi village, near Jodhpur. 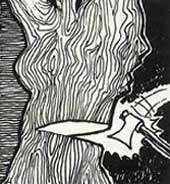 FOLLOWING an extended drought and widespread deforestation, Jambhoji, the son of a village headman in Rajasthan, had a vision that the hard times were a result of the conflict with nature. In 1485, Jambhoji, who was now known as Swami Jambeshwar Maharaj and the founder of the Bishnoi sect, laid down 29 tenets for his followers,] which included banning the killing of animals, cutting green trees and especially the khejdi, and cremation to save firewood.

Though on several occasions Bishnois have laid down their lives to protect trees the sacrifice of Amrita Devi of Jalnadi village, 25 km from Jodhpur, in 1731 is particularly memorable.

Maharajah Abhay Singh of Jodhpur wanted to build a new palace and despatched an agent, Giridhar Das Bhandari, to fell the forest around Jalnadi. As Bhandari's axemen approached the site, Amrita Devi rushed to them, and pleaded in vain for the trees to be spared. In desperation, she then hugged the first tree that was to be cut and uttered the now-famous couplet of the Bishnois, "A chopped head is cheaper than a felled tree." Then she fell to an axe blow, but her three daughters stepped forward to take her place. They, too, met the same fate.

Bhandari sent for reinforcements, and, in turn, the Bishnois sounded the alarm in 84 villages. From 83 villages volunteers responded. By the end of the day, 290 men and 69 women from 49 villages were felled by the axemen. When Abhay Singh was told the tale of Bishnoi bravery, he was filled with remorse. He stopped work on the palace, visited the Bishnois to apologise and promised them that they would never again be asked to provide timber, khejdi tree would ever be cut and hunting would not be permitted near a Bishnoi village.

Jalnadi is now known as Khejarli and a concrete tower there marks the spot where Amrita Devi fell.