Rural employment guarantee scheme does not work as envisaged

Rural employment guarantee scheme does not work as envisaged 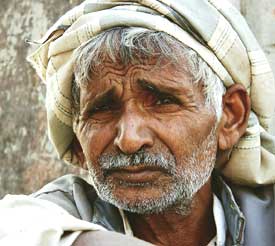 THE National Rural Employment Guarantee Act (nrega) promised to provide livelihoods in villages by providing a minimum of 100 days of employment to every household. It was envisaged that this would be done by initiating projects that would ensure long-term security by creating productive assets. That's not exactly how things panned out on the ground as this correspondent discovered while accompanying Asha Parivar and the National Alliance of People's Movements, two civil society groups that were conducting a social audit of nrega schemes in Uttar Pradesh's Hardoi district between November 27, 2006, and December 1, 2006. The ngos brought out a factsheet after conducting the social audit. It listed a number of gross irregularities in the implementation of the scheme. Further explorations by Down To Earth confirmed the findings of the audit.

Section 5.1 of NREGA stipulates what kinds of works can be carried out. It says clearly that water conservation and harvesting, afforestation and tree plantation, construction of irrigation canals, desilting of tanks, renovation of traditional water bodies and rural connectivity should be the focus areas.

Hardoi was one the 22 districts in Uttar Pradesh identified for the implementation of nrega. About 39 per cent of the cultivable land (297,394 hectares) in the district didn't have irrigation coverage. People mostly grew rice and wheat. Those with access to irrigation facilities grew sugarcane. The majority of cultivators were marginal farmers dependent on rain. Output was low and agriculture a scarcely viable source of livelihood. A high soil degradation rate didn't help. Marginal farmers migrated to cities for close to six months a year to supplement their earnings from agriculture. The district was brought under nrega to help regenerate the district's agriculture through water conservation.

But that didn't happen. Most nrega resources actually went into building roads. Official nrega figures show that in Sandila block, out of 85 works taken up in 52 gram panchayats, three were for tree plantation and the rest for building roads. This frenetic road construction activity forced Ved Prakash, block development officer of Sandila to ask panchayats not to take up any more road construction schemes and focus on water conservation and tree plantation.

Section 5.15 made it abundantly clear that land acquisition was not permitted under NREGA. Specifically, the act said that land "belonging to small and marginal farmers and SC/ST landowners cannot be acquired or donated for works under the programme".

This provision was violated as well. Gokul Punia, a marginal farmer with about a hectare of cultivable land in Padri village, was excited about nrega when he learnt that he would get employment for 100 days and water harvesting works to ensure irrigation would be undertaken. He was looking forward to freedom from annual migration to unknown places. After six months, he was completely disillusioned.

Not only did the promise of water harvesting works prove to be chimerical, he lost some of his land for the building of a road in the bargain."We heard so much about the scheme, instead of bringing benefits, the scheme has taken away our land," said Gokul. Though he got 25 days of daily wage jobs, the loss of land has made him poorer. The 900-metre-long road constructed in the village ate into some of the land of 11 other farmers. Six farmers lost topsoil from their lands for the construction of the road, which rendered part of their land unfit for cultivation.

"The gram pradhan told us the gram sabha did not have enough land, so we had to give a bit of our land," said Natha Kuru, a farmer with about half a hectare of land. "The scheme came like a curse to us. Instead of providing benefits, it adversely affected whatever little livelihood options we had," added Sardar Kunti, another affected marginal farmer.

The head of Padri's panchayat, Srirar Hussain, admitted that private land was acquired. "There isn't enough public land in the village, we used some portion of private land," he said.

The story was the same in all the 107 villages in Sandila and Bharawan blocks of Hardoi village.

Sections 4.3.4 and 4.8.1 made it clear that copies of job cards would have to be maintained by panchayats and every agency paying wages must record on the card the number of days worked and the amount of payment made. 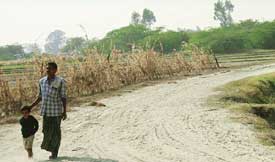 Arman Khan, a resident of Tiloya Khurd village, had a job card, but it was blank. No entries for number of days employed, no entries for money paid. The same went for Muna, another resident of the village. However, both claimed they had been paid for 22 days of work at Rs 58 per day, the minimum wage fixed by the Uttar Pradesh government.

When asked about the conspicuous lack of entries in the job card, Sohan Lal said "People trust me and many villagers have kept their job cards with me." He promised, however, to make entries in all the 39 job cards issued by the gram panchayat.

A close scrutiny of the muster roll in the village showed discrepancies in the number of days' work provided and correspondingly the amount paid," said Sandeep Pandey, founder-director of Asha Parivar.

"Of 107 gram panchayats, there was no information about the muster rolls from 26," said Mahesh, a volunteer with Asha Parivar. There were several instances of fake signatures and Asha Parivar volunteers had detected discrepancies in payment and entries.