The days when the word leper was almost an invective, and the disease itself considered a scourge, are over. Patients, voluntary workers and ordinary villagefolk are labouring shoulder to shoulder to, root it out through an eradication programme 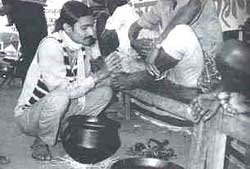 ROHINI's bleeding wounds and mildly deformed fingers - afflicted by leprosy - had initially evoked the traditional reaction of fear and contempt from fellow villagers. But she and thousands of others belonging to Madhya PradesWs (mp) Rajanandagaon district have now been rescued from the evil clutches of leprosy. The cursed disease is being overpowered by the Danish Assisted National Leprosy Eradication Programme (DANLEP), started in 1987. DANLEP is a part of the larger National Leprosy Eradication Programme (NLEP).

The programme's approach to the problem is rather novel, as it has chosen to treat patients in their homes instead of in a leprosery.- 'Keeping patients in their homes has helped people overcome their fears and hatred," says G P Mishra, the district leprosy officer (DLO), Rajanandagaon. The programme has also effectively involved the locals by organising large camps and creating a battery of janbhagidars (volunteers). In the camps organised at regular intervals, patients closely interact with leprosy workers, doctors and villagers.

A typical day in a camp starts with the community breakfast followed by a group discussion among the participants on the symptoms of leprosy. After lunch, patients,undergo water and oil treatment in batches wherein their limbs are first soaked in hot water and then massaged with oil. This therapy helps in healing the wounds. The day concludes with a community dinner and a cultural programme, These camps have achieved spectacular success in transforming people's attitude to the disease, be they patients, their families or other villagers.

Achieving this turnaround in the minds of these rural folk has not been easy. In fact, not far from Rajanandagaon is Asra village, where superstition held such a stranglehold over the locals that leprosy patients had consistently got evicted from the village for the past few decades. "My hapless mother was e@pelled by the, village panchayat in 1965. Unablelto iolerate the insult heaped on her, she hanged herself," recalls Chinta Ram. The villageo were extremely resistant to change. The initial meeting of the DANLEP in March 1991 with village elders proved futile. They refused to let the organisers conduct a camp in the village, claiming that there were only two cases of leprosy in the area. An influential village elder, Seth Niranjan Agarwal had the disease but would not admit it, and another elder, an Ayurvedic practitioner, Dau Vyas Narayan, declared that since leprosy was the consequence of sins committed in the past, there was no cure for it. The village youth finally agreed to organise the camp and after much persuasion, Narayan gave his consent. Once the camp was held, there was no looking back. An organisational committee was formed in each of the four hamlets into which the village is divided to conduct the camp. Although the villagers took a long time to warm-up to the idea, ultimately, Agarwal admitted that he had the disease and Narayan dined with leprosy patients.

The holding of these camps has inspired many to come forward and help in the fight against leprosy. "It was after a camp was organised in my village in October, 1991, that I decided to become a janbhagidar and serve the people," says M P Sahu, a middle-school teacher in Pendri village. janbhagidars have indeed proved to be a vital and crucial link between the people and leprosy workers. They monitor the disease in their respective villages, bring patients to the leprosy centre and organise cultural events in the village. Any volunteer offering his services undergoes a short training after which he becomes adept in spotting the disease. "I am illiterate but can identify the primary symptoms of leprosy," says Gyan Singh, a janbhagidar in Asra. These volunteers have been successful in saving many lives by convincing patients to try the water and oil massage treatment along with the drug therapy consisting of depson, -rephampicin' and clopazimin. Many of them have themselves recovered from leprosy after having undergone treatment for the disease in the past. Fully cured, Girdharilal Dhurve, sarpanch (head of panchayat) of Rewadahan village is a janbliagidar today.

The culture and traditions of the locals have also been effectively tapped to serve as media for spreading awareness. Besides street plays, group songs and village fairs which are the main tools of communication, styles of folk dance and theatre like nacha and nautanki have been active conduits too. In Pendri village, janbhagidar@ along with other villagers staged a play called Jethu Punia - a tragic tale of a young married couple of whom one suffers from leprosy - which played to packed audiences. "We effectively propagate the message through pandvani, a local ver- sion of the dance-drama depicting the story of the Pandavas," says Dhetakin bai, secretary of the mahila mandal and a janbhagidar in Dhanbad village.

In some villages, festivals like Dussera and Holi have campaigned for the cause too. On the occasion of Dussera, a huge effigy of the leprosy bacillus (Mycobacterium leprae) was set afire with three arrows symbolising the three drugs used to cure the disease, along with the conventional effigy of the demon king Ravana. Villagers in certain other places made it a point to include leprosy patients in their celebrations because the disease had earlier kept them excluded from Holi festivity. "I was so happy that I cried when villagers applied gulal on my face," says Jhagia bai of Idar village.

Besides having managed the widespread participation of the village folk, the programme can alsoboast, of a well-oiled infrastructure and an uninterrupted supply of medicines. Even though the central government initially finances the expenditure incurred by the leprosy Centres, DANLEP reimburses the entire amount later. Inspired by the success of the experiment in Rajanandagaon and Durg in mp, Cuttack in Orissa and Salem in Tamil Nadu, DANLEP has replicated this participatory model in certain other districts like Gwalior in mp and Sambalpur in Orissa.

However, it has not been smooth sailing for the programme. The district faces an acute shortage of medical personnel. Also, three posts under the DLO, lie vacant. Moreover, the DLO has little control over his staff as they report directly to the Rajanandagaon-based chief medical and health officer (cm&o), responsible for the overall management of health services in the district. "I cannot even sanction their leave, forget taking any action against erring workers," complains Mishra. When contacted, P N S Chauhan, the cm&o defends the state's policy of putting everything under his charge, "It ensures a proper coordination at the different levels and integrates various health services in the district."

But it is commendable that DANLEP has managed to fight back not just leprosy but even these drawbacks remarkably well.