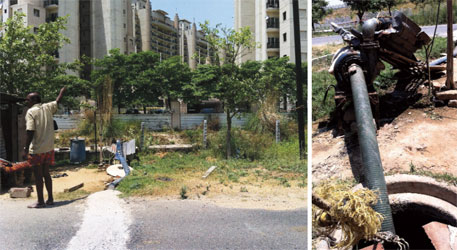 For the past year Tulsi Ram has been living in a tin shed near a manhole. His job is to ensure that the manhole does not overflow. As soon as it is full he switches the motor pump on. This sends sewage to the nearby storm water drain. If he oversleeps or is not in attendance, the posh ATS Greens Paradiso township in Greater Noida can get chocked with sewage backflow. “The smell is so bad and mosquitoes so many that sleeping on the job is out of the question,” he says. He earns Rs 160 per day for the job.

The manhole Tulsi Ram attends to is not connected to any sewage system. So the developer has illegally dug the adjacent road and laid a pipeline to connect their sewage outlet to the storm water channel, meant exclusively to drain rainwater. Resident Ajit Singh found this out during a morning walk some months ago.

“The Greater Noida Development Authority (GNDA) has gone overboard in ad vertising the luxury hotels, fancy malls, luxury apartments, night safaris and Formula One racing circuit in the area. But it has not put in place a basic amenity like a working sewage system,” says Singh, who has served 33 years in the Air Force. “Many areas in Greater Noida are not connected to the sewage system,” he says. Singh recently sold his flat in the densely populated Dwarka for a retired life in Greater Noida.

The developer’s tagline for the highend campus is, “People who live in our property like not just our houses, but also the residents and atmosphere that surrounds them”. What happens beyond the campus boundaries is, perhaps, least of the developer’s concern, says Singh. ATS Greens completed construction of Paradiso in May last year. Of the 1,100 flats in 24 towers, 600 are occupied.

Three-fourths of 12-hectare campus is dedicated to landscaping and greenery.

There is sufficient space to set up a sewage treatment plant (STP) within the campus. But the developer has no intention of cleaning up the mess. In 2006, GNDA gave the developer clearance for the sewage with the understanding that the campus will be connected to the central sewage disposal system. But GNDA has not done so. The authority has asked the Uttar Pradesh Jal Nigam to set up a pumping station for ATS Greens, says K K Singh, officer on special duty, GNDA.

An STP with a capacity to treat 137 million litres of sewage each day (mld) was set up in Greater Noida last month, says Singh. But since the sewage lines are unconnected, it receives only 20 mld sewage. “All the areas will be connected to the system within a year,” he assures.

The estimated population of Greater Noida is 300,000. Based on this, the official sewage generation is about 40 mld.

This does not factor in sewage generated by households and residential complexes that have private wells. GNDA officials say the authority is preparing to tap Ganga water to augment water supplies and treat sewage for projected population until 2021.

But for the time being, developers are not concerned about hygiene or sanitation. “Realistic dangers of disease and epidemics are damned,” says Singh.