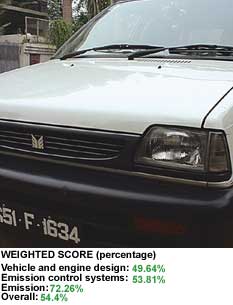 Carving out a big niche in the small-car segment, is no mean achievement. Since it first hit the roads last year, Maruti 800 Euro II model has grabbed the lion's share of the Indian auto market by striking a good compromise between economics and environment. The car has been rated the second best primarily because it scores consistently in all aspects of the environment, from engine and vehicle design, pollution control equipment to actual emissions. This is in stark contrast to other vehicles, which have balanced their good performance in one sphere with the bad in the other. The product has been designed keeping in mind the requirement of the middle-class population of the country which wants mobility with less cost. Apart from being relatively inexpensive, Maruti 800 (Euro ii) is also less of a gas guzzler. It has a fuel efficiency of 16 km per litre, which is higher than even its Euro i version and can be contributed to low vehicle weight (695 kg) and high compression ratio. Like Matiz, it has just one hole per cylinder keeping in mind higher gum content of Indian fuels. However, since it has low injection pressure compared to Matiz, the capability of the injectors in providing homogeneous and atomised air-fuel mixture is also reduced. Despite having the same engine size (800 cc), Maruti has lower engine efficiency. Compared to the top product, it also lacks knock sensors and conventional metals are used as construction material for all engine parts. Maruti has installed all the necessary pollution control equipments and, therefore, scores very high in this aspect. However, looking at its catalytic conveter design, which has 30 per cent higher loading than Matiz, it seems that Maruti relies more on it to meet emission norms. It also has exhuast recirculation system and evaporation loss control device -- both of them controlled electrically to reduce the emissions. In actual emissions, Maruti 800 (Euro ii) has its emissions 72.3 per cent better than Euro ii standard.