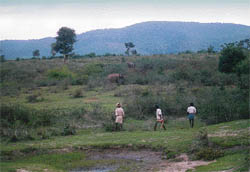 Madhavappa owns a farm just a kilometre from the boundary of the famous Bandipur Project Tiger Reserve close to Hangala, a largish village in the Chamrajnagara district of Karnataka. On this he cultivates ragi or finger millet. I met him in this field where his young relative was killed the previous night by a cow elephant and her calf, which the unfortunate youth had been trying to drive away. "He got too close in the dark and the animals didn't like it," commented Madhavappa.

I asked him what happens if you don't drive the animals away. He shrugged and said matter-of-factly: "we could lose an entire year's crop to a herd in a single night and then we have to go back to the money lender."

Madhavappa's acceptance of this cycle of life was, however, in stark contrast to the group of angry youth who had earlier surrounded my jeep. I was let through after being identified as a scientist and not a forest department official. As I went back to the jeep the crowd was waiting. "You and your colleagues have been coming year after year, every time an elephant or villager dies and what have you done," accused one young man. "All your research work never works; the elephants keep coming and we get killed and our crops destroyed," charged another. As we drove off I heard Madhavappa's voice, "the elephants also have a right to live. We are the ones who are destroying their home."

This is a common perception I come across all over India wherever wildlife-human conflict is a serious problem. In Assam's Darrang district located on the northern bank of the Brahmaputra elephants frequently foray from the terrai and babbar forests on the foothills of the Himalayas and raid crops intensively. They sometimes travel 30 km from the patches of remnant forests. Crop damage and manslaughter is common. Yet the people here believe that the death of an elephant close to a village, often caused by a single errant villager, is a very bad omen. Every single animal thus killed is festooned with flowers and the entire village gathers to offer prayers before the animal is cremated. This despite the area having one of highest elephant mediated manslaughter frequencies in the country.

Inhabitants of this region are well aware that massive encroachments by insurgents and illegal immigrants has led to the loss of 250 square kilometre of elephant habitat, particularly in the Nameri Project Tiger Reserve and adjoining reserved forests. This has occurred in as little as 5 years and is deemed to be the very reason for the long-range forays of elephants. I am often struck by the clarity of local wisdom in these matters.

Further west, in the Duars of North-west Bengal, nearly 45 people are killed each year by elephants. The forest department staff are specialists at dealing with conflicts here and offer simple pragmatic solutions. They have advised the villagers to keep their compound walls low so that they can see any elephant approaching their houses Sure enough, wherever this recommendation has been implemented human mortality has reduced significantly.

Elephants get away relatively unharmed and conflict related mortality among elephants is low. Almost all villagers are unequivocal in their opinion that elephants should not be killed under any circumstances. Indeed in some areas the reverence for these animals is so deep rooted that a senior colleague of mine comments "There is no conflict in these areas; the elephants come and the villagers flee, leaving their fields and house to their mercy".

Sadly, such traditional tolerance, often leading to sheer destitution, is fast being replaced by antagonism. Schemes associated with relocation of forest dwellers for protected area management, infrastructure building and the failure of conflict mitigation methods, through much of elephant habitat, has led to this transition. In the Hediyala Range on the east of Bandipur National Park around 150-200 elephants move out of the park during cropping months to temporarily occupy a government managed eucalyptus plantation. From October to November, they maraud fields at night and the farmers retaliate by electrocuting a number of animals each year, using lines connected to high-tension cables.

A study by the Asian Elephant Research and Conservation Centre, Bangalore in the Kodagu district of Karnataka revealed that an overwhelming majority of subsistence farmers felt that elephants had to be protected as they had a right to live. A surprisingly low percentage believed that they should be protected because they are avatars (reincarnations) of Lord Ganesa .

A large percentage of subsistence farmers felt that elephants raid crops because they preferred crops to natural forage. They may not be far from the truth as shown in the forests in the Western Ghats of southern India, which do not suffer from large-scale habitat loss. Crop raiding by elephants is severe in farms bordering both Bandipur Project Tiger Reserve and Nagarhole National Park two of the best managed protected areas in the country.

Sukumar in a paper co-authored with Madhav Gadgil in 1985, provides a lucid explanation for this phenomenon. Adult male elephants, he states, crop raid because nutritional yields obtained per unit time foraging in crop fields is much higher than that obtained from foraging in natural vegetation. This translates directly into enhanced ability to compete with other bulls over access to females. Female crop raiding behaviour can be explained using the same rationale. However, for them, nutritional gains from crop raiding, input directly into progeny development and rearing

In our studies we have determined that nearly 70 per cent of all groups (which include herds and single animals) that raid crops comprise single and pairs of adult bulls. This seems to corroborate the above explanation.

I personally believe that the essence of mitigation of elephant-human conflict is centred around the traditional tolerance of inhabitants living within and around elephant habitat. Ignoring this attribute and their needs has led to antagonistic retaliation towards elephants, their habitats and the declaration of protected areas.

Electric fences and elephant proof trenching are only short-term strategies. As elephant numbers rise there is a need for long-term mitigation strategy. Landscape restructuring is one possible solution. On the periphery of Bandipur, a number of farmers have replaced elephant food crops like ragi and sugarcane with more unpalatable cash crops like cotton, tobacco and turmeric. The agricultural cooperatives should help the farmers with subsidies and loans for the propagation of non-food crops. In conjunction, the forest department should continue mitigation strategies through electric fences and trenches as elephants will take time to modify their behaviour.

In principle, the country has the two most important ingredients for the creation of an effective elephant human conflict management strategy -- traditional tolerance and a well-structured administrative mechanism.

As the status of the elephant acquires that of a national treasure, let us hope that through these interfaces, the farmer who lives as the animal's neighbour begins to share this sentiment. After all the fate of the elephant is really in his hands!