There is no preparedness in India against El Nio, the Indian government does not even have an action plan 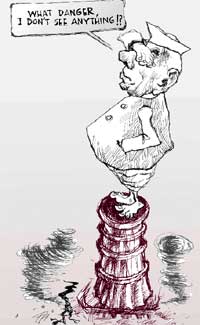 there is still confusion among Indian scientists on whether El Nio will strike India. However, weather experts from the West have predicted severe drought conditions and a shortage of foodgrains in 1998. Despite these warnings, Indian scientists are either ignorant or playing down this effect. Some fear that publicising its effects on India could lead to panic in the market and speculation and hoarding of foodgrains.

As yet, western forecasts have not proved true. A forecast issued on June 26 by the us National Oceanic and Atmospheric Administration ( noaa ) had said that India would be drier than normal. Also, Ants Leetmaa, director of the Climate Prediction Center of the us National Oceanic and Atmospheric Administration had said that El Nio would bring drought to India. The Food and Agriculture Organization ( fao ) says that although the overall rainfall situation in 1997 has been normal, poor temporal and spatial distribution of rains adversely affected crops in southern states where reductions in the output of winter foodgrains and oilseeds are expected. As a result, the output of winter grains is expected to be some two million tonnes below target and to fall from 105.1 million tonnes in 1996-97 to around 103.5 million tonnes in the current marketing year. Overall output of rice is projec-ted to increase, by some 1.6 million tonnes, compared to 1996-97, though production of coarse grains and pulses are both expected to fall. The 1997-98 target for rice production, from the kharif and rabi crop, has been set at 83 million tonnes.


So far, no alarm bells have been sounded to face an impending crisis. No contingency plan has been worked out to face the calamity. "The last time India had drought was in 1987, which is said to have been caused by El Nio," says Devinder Sharma, who is with the Delhi-based Biotechnology and Food Security, a research institute. The Indian Meteorological Department ( imd), New Delhi, had not predicted that drought. In fact, the government was caught unawares. Nevertheless, it acted quickly.

Following the failure of the south west monsoon, the government of India set up a cabinet committee on drought ( ccd) which was headed by the then prime minister, Rajiv Gandhi. Among the steps the ccd undertook were:

• Preparation of water budgets to optimise the use of water available in the reservoir and utilisation of ground water.

• Strengthening of the public distribution system

• Public health measures and providing supplementary nutrition for the young and the needy children in the drought affected areas.

While other countries are taking measures to meet the shortage in food supply, India in the second week of November exported wheat and rice. The government in Ecuador has stopped the export of foodgrains without debating over the authenticity of the prediction.

"The government does not even think it fit to appoint a committee of scientists or agriculturists to study the impact of El Nio on India. The government, whenever questioned, takes recourse in the fact the monsoons have been normal and there is no cause for alarm," adds Sharma.

Well-known scientist M S Swaminathan while speaking to Down To Earth said that it is difficult to predict whether El Nio will affect India as the Indian monsoon is a very complex phenomenon. However, he says, "Keeping in mind the predictions of the fao and the wmo , the Indian government should be prepared with a contingency plan".


Indian weather experts believe that El Nio will have no impact on India. "Despite what the prophets of gloom in the West are predicting, our observations from meteorological centres across the country indicate a normal monsoon," says N Sen Roy, director general, imd .

imd officials insist quantity and distribution of rainfall in the current monsoons has been normal so far. According to Roy, 29 of the country's 35 meteorological sub divisions have received normal or excess rainfall. Most of the other regions have suffe-red only a marginal deficiency, which could be made up as the season progresses. He explained that the weather pattern is too complex , with far too many variables involved for a simplistic reading of weather to come by. "There is no correlation bet-ween El Nio and the state of the monsoons," experts say.

Sources at the imd said that the department had taken the El Nio into account while making the monsoon forecast. "There is no direct evidence to link the Indian monsoon with El Nio and how it affects the crops," says P S Datta, a scientist working with the Indian Agricultural Research Institute, New Delhi. "It is too early to predict whether El Nio will strike India," says S K Dubey, Centre for Atmospheric Studies, Indian Institute of Technology, New Delhi.

In his book, "The history and economics of Indian famines (1914)", A Laveday, a British drought and famine expert, wrote that it is towards the middle and the end of each century that most of the calamities have struck India. However, it is to be noted that it is only recently that scientists have linked disasters in various parts of the world with El Nio. Therefore, whether disasters in the past were related to El Nio, remains a debatable question. Richard Grove, professor of environmental history at the Australian National University, who has been doing major research on El Nio, feels that El Nio will have a direct effect on the monsoons in India. He told Down To Earth in a recent interview: "When you get a strong El Nio, the Indian monsoon fails. You can demonstrate that historically. The biggest famines in Indian history were directly linked with the El Nio effect."


At the same time there are a few scientists who see some connection between El Nio and the monsoons in India. D R Sikka, former director of the Indian Institute of Tropical Meteorology in an interview with a fortnightly magazine said that the El Nio effect occurred when the pressures over the Pacific Ocean and the Indian Ocean were out of phase. According to him, whenever the El Nio phenomenon has occurred, 60 per cent of the time India has had a bad monsoon. He says that it, however, has been different this year, and added that "regional or other factors" may have offset the El Nio effect.

J Srinivasan, chairperson, Centre for Atmospheric Studies, Indian Institute of Science, Bangalore, says that whenever there was unusual warming or cooling of the east Pacific, global circulation patterns changed and hence rainfall in India was affected. "However", he says, "we are not ready for a conclusive prediction." While it cannot be said that sea warming will produce a serious drought, all the four serious droughts that have occurred in India over the last 120 years have been El Nio years.


Though us weather experts have warned that a severe El Nio factor could badly affect the monsoons, Vasant Gowarikar, who is working with the imd and is the creator of the 16-parameter monsoon prediction model in India, rejects this opinion. According to him, El Nio is just one of the parameters taken into account while preparing a long range forecast by the Indian Monsoon Prediction Model. He adds that us scientists consider only three to four factors. Gowarikar believes us scientists have been consistently wrong for several years while predicting the Indian monsoons.

According to K S Sivasami, a professor at the Centre for the Study of Regional Development, Jawaharlal Nehru University ( jnu) , "Indian monsoon prediction is currently based on an empirical 16-parameter model which the imd has been successfully using since 1988 to predict monsoons. If we analyse monsoon rainfall data since 1951 onwards, it is clearly seen that there is no direct relation between El Nio and the Indian monsoon. There are many years in the past when El Nio has occurred, but India has witnessed good monsoons.


Some scientists acknowledge that there is something wanting with monsoon prediction in India. "Monsoon prediction in India is still at an empirical stage. Widespread droughts occur due to fluctuations in the monsoon. If the good monsoon period is longer, the subsequent decade may face drought," says Sivasami. This means the drought may occur over large areas. It is mainly due to the fluctuation of monsoon and El Nio may be one of the factors. But in what way it is linked is still unknown. Moreover, it is still difficult to predict what will happen in the entire monsoon season and definitely not day-to-day or region-to-region variations.

Till then India has to wait. If El Nio strikes, the government machinery will be caught napping and the worst hit will be the people.

Written by S S Jeevan with inputs from Jitendra Verma and Richard Mahapatra.