Time to Plug in

The International Conference for Renewable Energies is to be held in Bonn, Germany. But here is a sector dwarfed by fossil fuels, and although governments can proactively root for renewables, and some have, the options given to developing countries are quite limiting. After travelling in Germany and the UK, the future of renewable energies, says kushal p s yadav , is truly in the balance

Time to Plug in 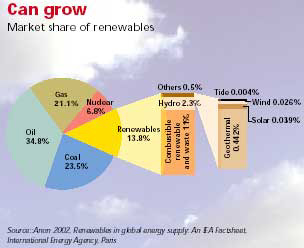 There is a prominently held view that dissemination of renewable energy technology is marred by high costs. It's true that a few technologies like wind power have become cheaper, but others are still expensive. Solar photovoltaics (PV) and wind energy now cost one-tenth of what they did in the early 1980s. Today a wind energy plant costs just about the same as a coal-fired thermal power plant of the same capacity; it could be even cheaper at places with high wind speeds. The cost of biomass gasification and geothermal energy is going down too. Despite these developments, markets and economic policies worldwide still favour fossil fuel technologies.


Subsidies given to fossil fuels are perhaps the single most important impediment against renewable energies. Government support for emergent energy technologies started with coal in the 1800s, first subsidised by the United Kingdom (UK) and then by other European countries. A century and more later, many European countries still subsidise their coal-mining sector. "Similar levels of government support have been found in subsequent energy transitions, including those driving oil and natural gas production and use, as well as nuclear power. Direct aid was not the only instrument. For many of these transitions, governments provided technical assistance, guaranteed the purchase of new technologies and paid for the research and development needed to overcome technical barriers to implementation," write Jonathan Pershing and Jim Mackenzie in Removing subsidies: Levelling the playing field for renewable energy technologies, prepared for the International Conference for Renewable Energies to be held in June 2004 in Bonn, Germany.

"The result of historic -- and ongoing -- government subsidies has been to skew the playing field against 'clean' sources of energy," the paper claims.

Governments gave subsidies worth US $250 billion to US $300 billion to fossil fuels in the 1990s each year, says an assessment by the United Nations Development Programme. As a mid-1990s paper of the US Congressional Research Service says: since the "great bulk of incentives support mature fossil and nuclear equipment, the existing subsidy structure markedly distorts the marketplace for energy in a direction away from renewables."

"In all OECD (Organisation for Economic Cooperation and Development) countries, 80 per cent of the public money for energy research projects in the last 50 years went to nuclear energy. The result: only five per cent of the energy in the world comes from nuclear sources," says Hans-Josef Fell, a member of the German parliament from the Green Party. Between 1994-2001, more than US $72 billion was given to the coal sector in the European Union (EU). Germany, between 1970-2003, gave US $144 billion as subsidy to the coal mining industry.


Several tricks disguise subsidies to fossil fuels. Take for instance the energy legislation debated in the US last year. As per the US Congressional Budget Office (CBO), the draft 2003 energy bill would increase direct spending on energy by US $3.7 billion over 2004-2008 and by US $5.4 billion over 2004-2013. Revenues would be divided between electricity, coal, oil and natural gas production and nuclear power sectors. Only a very small share will be spent on renewables. The bill's drafters say all this is being done for energy security.

Critics often ask where the money for 'expensive' renewable energy sources would come from. But supporters of renewable energy say it is just a matter of diverting money and not finding new finances. The World Energy Council, an international non-governmental organisation working on energy issues, estimates that diverting just one year of Europe's subsidy for fossil fuel and nuclear power (more than US $15 billion) could revolutionise the entire international solar energy industry, making it cost-competitive with traditional sources of energy.

The International Energy Agency (IEA) estimates that US $16 trillion will be invested worldwide in energy infrastructure during 2001-2030. About 60 per cent of this amount will be spent on electricity generation and distribution. According to IEA, more than half this investment will be required in developing countries. China will need 14 per cent of this investment (US $2.3 trillion), as will India, Indonesia and the rest of Asia. Of the total investments needed in electricity, 60 per cent will be required in transition economies and developing countries.

It is imperative that a proportion of these projects be based on energy from renewable sources. World Energy Council research finds that money has to be invested in technologies like solar PV now, or they will get locked out in the future by fossil fuel technology. For every doubling of production in the solar energy sector, the price goes down by 20 per cent. So if we invest now, solar and fuel cells can become the world's chief electricity suppliers.


What is the environmental and health cost of using fossil fuels? The case for renewable energy would have been strengthened if this cost, often called external cost, could be computed. Not much data was available on these external costs. Till now.

Since 1991, researchers from EU and the US have been researching on the EXTERNE project, to quantify the socio-environmental costs of electricity production. It is one of the first projects to put plausible financial figures against damages resulting from different forms of electricity production for Europe. "Research has proven that the cost of producing electricity from coal or oil would double and the cost of electricity production from gas would increase by 30 per cent if external costs such as damage to the environment and health were considered. It is estimated that these costs amount up to 1-2 per cent of EU's gross domestic product, not including the cost of global warming. These costs have to be covered by society, since it is not included in the bills which electricity consumers pay" says a July 2001 EU press release. But these costs do not take into account the cost of global warming. In fact, the aggregate cost of road transport, the dominating source of damage, alone adds another 1-2 per cent of GDP to the bill.

But if all costs were accounted for, the balance sheet would drastically change. It's estimated that the environmental cost for electricity from coal generation range from cent 2-15/ kilowatt hour (c/kWh; US $cent 2.4-18 per kWh); oil between cent 3-11 c/kWh (US $3.6-13.2 c/kWh; and for gas cent 1-4 c/kWh (US $1.2-4.8 c/kWh ). Given that the cost of electricity generation in EU is about 4 c/kWh (US $4.8c/kWh), with the addition of external costs, the actual cost for electricity from coal would come to about 13 /kWh (US $15.6/kWh). This is about 2.5 times higher than the current cost of generating energy from wind and only about half of that from some solar PV systems. The math is clear. If environmental costs are considered and subsidies on fossil fuels removed, renewable technologies can compete with fossil fuel technologies.