India has come out with maps of its biodiversity-rich regions, one of the first countries to do so in the world. It was the fruit of a five-year project, jointly undertaken by the Department of Biotechnology and the Department of Space, which began in 1997. The survey covered 84,000 square kilometers (sq km), comprising 44 per cent of total forest cover of India. The regions mapped extensively are the Northeast region, Western Himalaya, Western Ghats and Andaman & Nicobar Islands 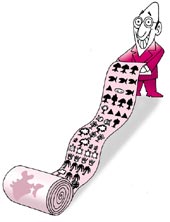 India has come out with maps of its biodiversity-rich regions, one of the first countries to do so in the world. It was the fruit of a five-year project, jointly undertaken by the Department of Biotechnology (dbt) and the Department of Space (dos), which began in 1997. The survey covered 84,000 square kilometers (sq km), comprising 44 per cent of total forest cover of India. The regions mapped extensively are the Northeast region, Western Himalaya, Western Ghats and Andaman & Nicobar Islands.

While the National Remote Sensing Agency (nrsa) under dos chipped in with high resolution satellite images of these hotspots, dbt coordinated intensive ground level field sampling. As many as 15 institutions from across the country -- including the Botanical Survey of India, Geological Survey of India, Central Institute of Medicinal and Aromatic Plants, Lucknow and the Bangalore-based Indian Institute of Science -- apart from researchers from local colleges and universities, participated in a mammoth exercise that classified several thousand plant species in terms of their endemic nature and medicinal and economic importance.
The classification methodology adopted was vastly different from that of the Forest Survey of India (fsi), Dehra Dun, which periodically brings out forest cover data. While fsi classifies vegetation mainly on the basis of density, such as dense and open forest, this survey shows different vegetation types on the basis of their community, physiognomy, gregariousness and local species types. The advantage is the wealth of detail generated on local biodiversity spots, which could be used to plan more refinedly.

Another significant aspect of this biodiversity characterisation exercise was that it established that the current way of biodiversity conversation by declaring an area a Protected Area (pa) was wrong -- this was focussed on too few species. India currently has a pa network that covers 5.8 per cent of natural landscape of the country. The survey, on the contrary, suggested that conservation planning has to take into account the entire local ecosystem.
Four important components of the programme were: survey of biodiversity, bioprospecting of molecules/genes of importance, dna fingerprinting to ascertain genetic variability and tissue culture-based conservation strategies for endangered species.

One programme that has already begun is identifying plant species available in both the Northeast and Southwest regions. dna fingerprinting helps determine the variability existing between two groups of plants. In addition, plants of high economic importance were collected and fingerprinted for complete characterisation and cataloguing. In the first phase, about 10 extremely important species each have been selected for the Northeast, South-western Ghats and the Western Himalaya regions. In the second phase, these species would be studied for important biomolecules, of possible use in the pharmaceutical industry.

About 320 species -- belonging to 116 genera and 48 families of wild relatives of crop plants -- are known to have originated in India. Within each species, the genetic diversity is astonishing. For example, an estimated 50,000 to 60,000 land races of rice used to be grown in India. Other crops with rich diversity include wheat, sugarcane, legumes, sesame, pepper, citrus, banana, mango, jute, ginger, turmeric, cinnamon and cardamom. Wild genetic relatives of these provide invaluable genetic material.

Similarly, about 3000 species of flowering plants are of medicinal value and about 139 species are extensively used in different systems of medicine such as Ayurveda, Siddha, Unani, Tibetan, and allopathy. Traditionally, raw material for medicines was obtained from forests. The Western Himalaya and Western Ghats are especially known for their medicinal plant diversity, but many species are under threat because of over-exploitation. A large scale modification in the natural landscape and consequent habitats is considered to be the prime cause of biodiversity loss.