Where have we gone wrong?

With every monsoon, the extent of floods in the country and its ensuing misery increases. Is this suffering largely self-inflicted?

Where have we gone wrong? 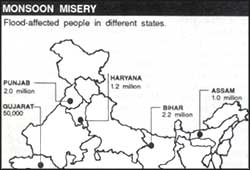 FLOODS are a major source of human misery in India and this year, too, they have wreaked havoc. Agriculture minister Balram Jakhar claims 2 million ha of cropped area has been damaged this year by the swirling waters.

Reports from across the country present overwhelming evidence that contrary to the oft-repeated claims of the political leadership, bureaucrats and public service engineers, the floods were caused by the failure of bunds and embankments to control the floods. Not only did these artefacts fail to hold the rising waters in almost all the rivers they were meant to bound, they also added to drainage congestion by obstructing natural watercourses and causing water-logging.

The country's rivers were particularly uncontrollable in Assam, where the length of embankments totals up to at least 4,000 km, and in Bihar, where it totals up to 3,400 km. Just comparatively moderate rain was sufficient to cause breaches in 19 of the 300 bunds in Rajasthan.

In Punjab, the Beas and the Sutlej burst through embankments in every district they traverse. In neighbouring Haryana, the Ghaggar burst through its embankments to flood three districts. Breaches in canals and minor dams caused floods in Uttar Pradesh as well.

The impact of the floods was both wide-ranging and devastating: 2 million people were directly affected in Punjab, 1 million in Assam, 2.2 million in Bihar and 1.2 million in Haryana, while in Gujarat, 50,000 people were temporarily displaced by the flooding of the Sabarmati.

As in the past, this year, too, the state governments have used the large number of people affected to make equally huge demands on the Central coffers: Punjab Rs 495 crore, Bihar Rs 500 crore and Haryana Rs 467 crore. But the Centre has so far released only Rs 212 crore for flood control and relief.
Ironically, the recipients intend to use their resources to build afresh those very flood control measures that besides costing a fortune, have repeatedly failed. An example is Punjab where the state government intends constituting a state flood control board whose primary objective will be to formulate a plan for an extensive embankment structure. Jakhar, too, has promised Parliament that he will speed up all pending flood control programmes.

Funnily enough, the idea that more embankments should be constructed to counter the threat of floods finds intellectual support in influential sections of society, as indicated by the lead editorial of The Statesman on July 15, which said, "Embankments, bunds and anti-erosion schemes have so far covered only about 1.4 million ha in the Brahmaputra valley". It also indicted the Assam government for "leaving at least 1.5 million ha of flood-prone areas exposed. These measures are woefully inadequate."

Guwahati-based North East Times, however, displayed a better understanding of the cause of floods when it said, "Traditional pathways of the monsoon waters have been blocked in industrial states like Punjab, Haryana and Gujarat, while the problem is aggravated by the embankments that protect rapidly expanding cities. The area vulnerable to flooding has doubled in the last 40 years and is around 45 million ha today."

In Delhi, officials of the Central Water Commission (CWC), asserted that they did, indeed, have a workable solution to the problem -- Flood Plain Zoning (FPZ). According to CWC chairperson M S Reddy, "This scheme would call for the reduction of population density in the flood plains of the country's rivers, as well as a restriction on permanent construction in these areas." But when FPZ was introduced in 1975, only the states of Andhra Pradesh, Madhya Pradesh, West Bengal and Manipur accepted it, and of these, only Manipur has begun implementing it.
Officials point out that powerful vested interests who have supported the development of urban and rural settlement of flood zones all over the country are the main hurdle to the acceptance of FPZ. Indeed, the relentless manner in which all principles about settlements in flood plains are being thrown to the winds is illustrated by the surge of waters in Delhi this year. (See Give name of Delhi story). Says S C Singh of the Benares Hindu University, who has studied the historical linkages of floods and urban settlements in North India since the days of Buddha, "Fear of floods has greatly determined the pattern of urban settlements in the flood plains." He points out that historical mega-cities such as Prayag (Allahabad), Kashi (Varanasi) and Patliputra (Patna), all situated in the Indo-Gangetic plains, were built on high spots protected from floods.

Unfortunately, this traditional intelligence has been replaced by unnecessary bravado because of which floods have become an integral part of the Indian monsoon.

WHEN ASKED why floods had hit Delhi so hard this year, the administrators of the country's most pampered city scoffed at the question. "Is it not obvious to you that we've had the highest rainfall in recent times?" quipped lieutenant governor P K Dave, after a recent press conference on flood relief measures taken by his administration.

But all Delhiites are not as blithe about passing on the responsibility to the weather gods. Sixty-eight year old Manek Singh lives in what was once Joruw Kotla village, but is now a residential colony called Sonia Vihar. During July 22-23, when 220 mm of rain was recorded, water entered many houses in Sonia Vihar. Singh says, "In the past, the water would have run off naturally to the river. Now, it just climbs up." He believes an important reason for floods in his part of the city is the rampant urban construction and the protective network of embankments, which has crippled natural drainage.

And this is not the only point to disprove what Delhi administrators thought obvious. According to the Meteorological Department, the Union Territory of Delhi gets an annual average of 690 mm of rainfall. This July, average rainfall in Delhi was a reasonable 520 mm, though East Delhi received as much as 780 mm.

After the heavy rains during July 22-23, several parts of Delhi were flooded, including Alaknanda and Govindpuri in the south, Pitampura, Shakti Vihar, Rohini and Harsh Vihar in the north-west, Mukherjee Nagar and Nehru Vihar in the north and Geeta Colony, Yamuna Vihar, Gagan Vihar and parts of Shahdara on the east bank of the Yamuna. Curiously enough, these areas had got flooded in August 1991 also, after a modest 147 mm of rain in 30 hours.

However, this year, the city administration had a new excuse up its sleeve. At a hurriedly summoned press conference last month, P V Jayakrishnan, metropolitan administrator in charge of flood relief, asserted that "rich farmers" in Ghaziabad, in order to save their crops, had breached the Bhasi and East Yamuna canals along the Delhi-Uttar Pradesh border, and this had caused the flooding in Shahdara and newer colonies such as Nand Nagri.

However, when a DTE correspondent and the Ghaziabad district magistrate, Rajeev Shukla, inspected the length of the Bhasi Canal, they did not find any breach. In explanation, Jayakrishnan claimed he had been told about the breaches by junior Delhi administration engineers. Even S Prakash, chief engineer of the municipal council of Delhi, who had earlier said that the breaches were on the Delhi border near Wazirabad, could not later identify their location on a map of canals around Delhi.


Urban planners point to a distinguishing feature of floods in Delhi, and in other Indian cities. All the areas that were flooded in 1991 and again this year, are low-lying areas, which were traditionally used for seasonal farming, but were now converted into residential areas under pressure from the fast-burgeoning population in the cities. Delhi's population shot up from 14.5 lakh in 1951 to 57.3 lakh in 1981 and 83.75 lakh in 1991. As a result, while Delhi's urban area increased from 591 sq km in 1981 to 700 sq km in 1991, the rural area surrounding the city shrunk from 891 sq km to 783 sq km in the same period.While many of the new settlements were unauthorised, some of them are officially sponsored. On the east bank of the Yamuna, a 130-sq-km urban sprawl has come up on a gentle gradient that was once the natural drainage to the river. "Colonies like Sonia Vihar, Sri Ram Colony and Rajiv Vihar have left hardly any space for natural seepage of rain water," comments R L Mehta, development commissioner (flood control and irrigation).

Alternative drainage systems have been built, but they have usually been inadequate. And Prakash admits that the Master Plan for Drainage of Delhi, adopted in 1976, "has been implemented very tardily". Subordinate engineers in his department reveal most residential colonies that have come up recently are on low-lying area and so the water in their link channels can be brought to the main storm water channels of the city only through mechanical pumping. But a week after the heavy rains during July 22-23, Jayakrishnan was still trying to reassure people in East Delhi that the water collected in their colonies would be pumped out soon.

Interestingly, many former farmers, who used to live in the villages of east Delhi and have now established small businesses, also point an accusing finger at the network of embankments that enclose the area. The most prominent of these is a high bund that has come up in the last two decades on the east bank of the river. Moreover, the flooded area that was bounded in the south by an embankment on which the railway lines to UP were placed, is now criss-crossed by elevated roads all of which were sites of massive waterlogging this July.

These embankments have converted East Delhi, which once enjoyed a good natural drainage as part of the Yamuna catchment, into isolated pockets of low-lying areas. (See diagram). But ironically, this has strengthened the engineers' perception that these areas can be drained only by pumping out the water. A stage may soon come when all the power stations of Delhi will only be used to pump out flood waters.