Win some, lose most

To find out what the Union Budget has in store for science and the environment, Down To Earth spoke to environmentalists and representatives of the scientific and business communities. Their views...

Win some, lose most 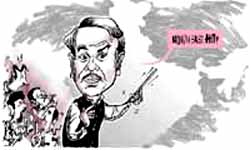 To figure out the importance the Indian government has attached in the Union Budget of 1999-2000 to science and the environment, Down To Earth spoke to environmentalists, scientists and representatives of the corporate sector. Most of them were disappointed with the Budget. Apart from a few encouraging signs, it is quite clear that the environment is not high enough on the political agenda of India's ruling coalition.

While concern over the state of India's rural environment has risen in the priority list of the government -- watershed development has finally made it to the Budget speech -- concerns regarding the urban environment continue to be brushed under the carpet. And the tax holiday for industries in the north-eastern region of the country has no environmental riders attached. This, as shown by the opinions of some noted personalities who are familiar with the region, could have adverse consequences for the fragile ecology of the region if industries are not regulated and monitored rigorously. As far as science is concerned, the finance minister Yashwant Sinha has comeup with some promising proposals.

The decision to form the National Bioresources Board has been well received by people involved in the field of biological resources. Now, it remains a question of implementing these plans -- something that the Indian bureaucracy and the political system have failed to do with astonishing regularity.