Delhi-based non-profit Centre for Science and Environment has just released a book that suggests how farmers in India can be enabled to cope with extreme weather events. Download your copy

How to enable farmers to cope with extreme weather events 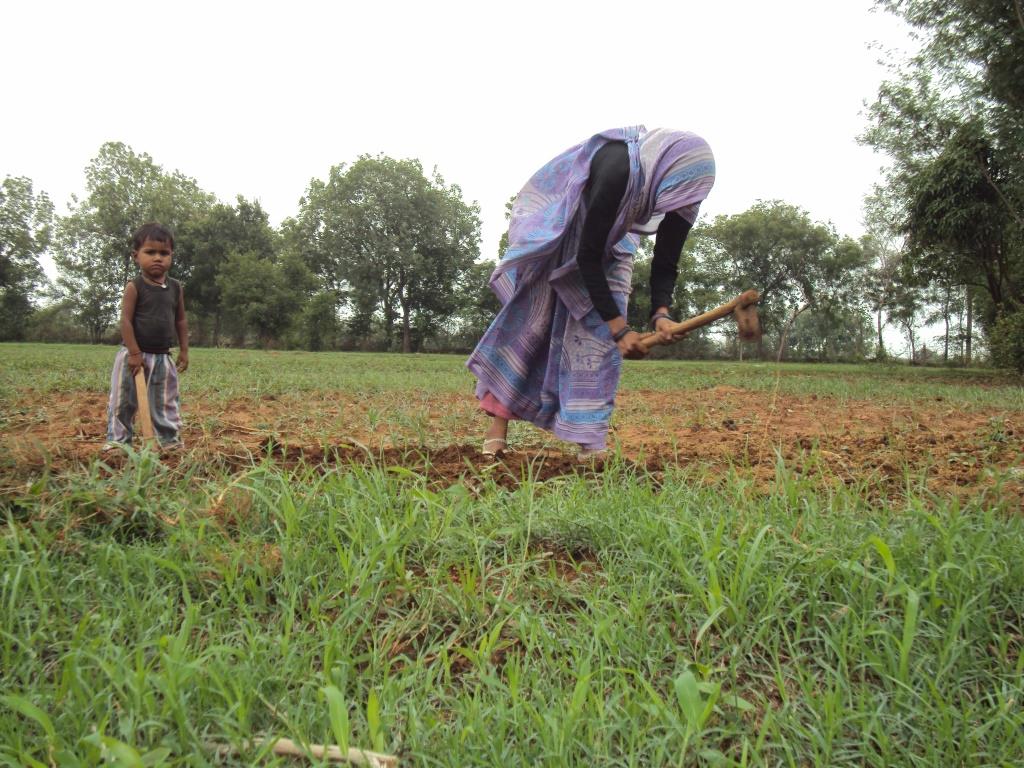 Year 2015 was the third year in a row when the rabi season was thrown out of kilter in large parts of India by deviant weather. But this is just one of the weather irregularities that India has faced in the recent past.

While in 2013, five states were impacted and 0.35 million hectares (ha) of standing crops affected, 2014 brought similar damages to six states and 5.5 million ha of crops when they were just a month away from being harvested. In 2015, no less than 15 states were hit and 18.23 million ha of crops were damaged. The 15 states account for approximately 75 per cent of India’s population and about 70 per cent of its geographical area, and produce approximately 81 per cent of its foodgrains.

During this period, Delhi-based non-profit Centre for Science and Environment (CSE) surveyed impacts on the ground. CSE’s study area was Mathura, Shamli, Muzaffarnagar and Agra districts in Uttar Pradesh (UP)—some of the worst-affected districts in the worst-affected state. The team met farmers, local leaders and panchayat-level, block-level and district-level officials including the patwari, the kanoongo and the tehsildar, among others.

The research over this period of time has been released in the form of a report titled “Lived Anomaly”. In the report, the non-profit has suggested a few ways to bring respite to the farmers and build safety nets for Indian farmers by adopting good practices. The key recommendations include:

Many countries are practising/experimenting with remote sensing technology and satellite data. But there are several challenges in doing accurate and speedy crop damage assessment at the farmer level and disbursing relief/insurance payouts, such as lack of digitisation of land records and the need to position constellations of  satellites to make available timely yield images.

It is currently not possible to get data at the farmer-field level, and getting high resolution real-time data is not feasible for a wider area. Also, it is difficult to translate the satellite data and information received into the exact field affected. Most disasters are hydro-meteorological calamities. During such events it is often not possible to procure optical data because of the cloud cover. Radar data is still used at the research level. Therefore, there is a need to combine technologies such as ground location sampling, aerial images, satellite data and weather data (for instance, rainfall grid data).

But the good news is that the government has rolled out some programmes to use satellite and remote sensing data for crop loss estimation on a pilot basis.

"The current fundamentals of agriculture are too weak to provide respite to farmers. From making farming remunerative and improving productivity to promoting climate resilient agriculture, the list of things to do is long and hard," says the report. 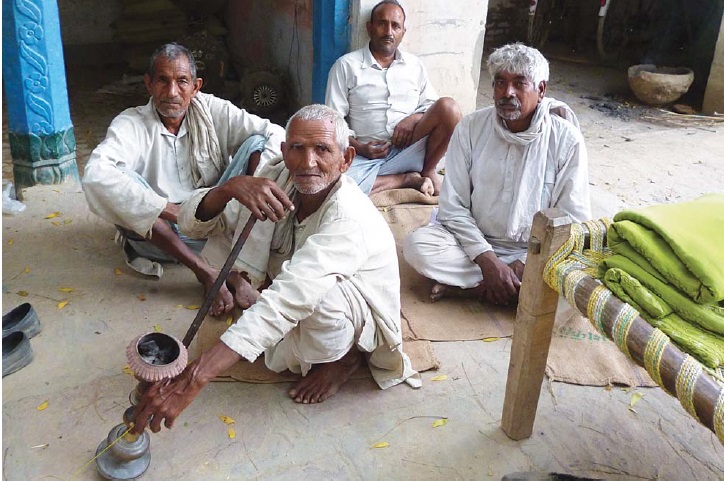 It further suggests that presently, the US is the only country offering Crop Revenue Insurance, which is insurance payout based on yield measurement and crop prices. Crop insurance in India can be attractive and a feasible compensation mechanism for farmers. Presently, agricultural insurance schemes cater to very few farmers in a few states and there, too, largely function as insurance for crop loans taken by farmers from banks. 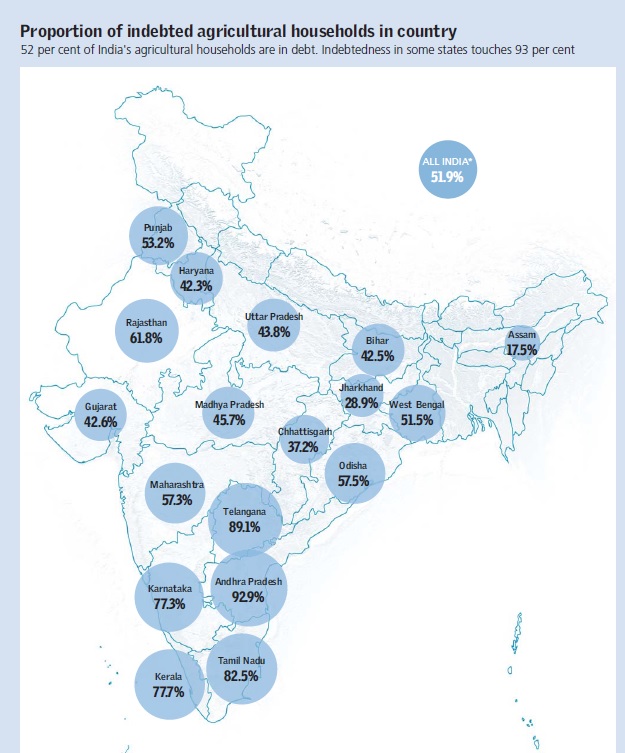 Effective public–private partnerships and substantial government subsidies can also be the key. Moreover, Substantial subsidies are needed not just in the premiums paid, but also in underwriting any losses and reimbursing insurance companies for operating and administrative costs.

Presently, Africa is leading the innovations in developing insurance products for small and marginal farmers.

Fast payouts through rapid assessments and the use of technology, such as remote sensing, AWS and mobile banking services is another recommendation given by the non-profit. In its report, it has cited the Agriculture and Climate Risk Enterprise (ACRE),  the largest index insurance programme in the developing world in which farmers pay a market premium.

The think tank further suggestes that A direct linkage of farmers with insurance companies can avoid the confusion which arises when the banks play the role of intermediary. This is also reflected on the consequent lack of awareness among the policyholders about insurance companies and schemes.

When freak becomes the norm

When hailstorms and unseasonal rains destroyed large swathes of rabi crops in 2013, they were thought to be freak weather events. But they hit again in 2014 and then in 2015, each time with more intensity and causing more damage. 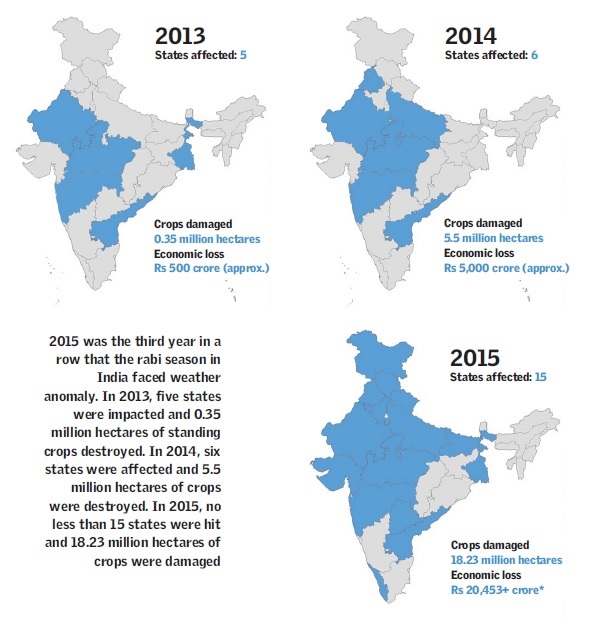 In the first week of March 2015, farmers all over India were preparing to harvest their rabi (winter) crops, such as wheat, pulses, potato, sugar cane, maize, groundnut and mustard and horticultural crops, such as grapes, papaya, mango, banana, onion and other vegetables, the weather turned rogue. But during the wretched winter and spring of 2015, unseasonal rain fell from early February itself. We know that the nationwide average rainfall, 1–18 March, was 49.2 mm, 197 per cent above normal—this was the real havoc-wreaker. We know that average rainfall for the whole of March was 61.1 mm, nearly double the normal, making March 2015 the wettest in 48 years.

The Union Ministry of Agriculture estimates regarding the extent of damage vary. A 28 April 2015 press release said crops on 189.81 lakh hectares (ha) were damaged. Then, in response to a Rajya Sabha question on ‘compensation for loss of crops due to variance in weather pattern’, the quantum of crop damage was revised to 182.38 lakh ha, as on 5 May 2015.

As on 5 May 2015, the Government of India estimated that 6.958 lakh hectares (ha) of horticultural area (where vegetables and fruits are grown) was affected in the country; 3.43 lakh ha of such area was affected in Uttar Pradesh, followed by Maharashtra (1.281 lakh ha), Haryana (0.589 lakh ha) and other states.

Centre for Science and Environment's book, titled Lived Anomaly, has just been released. The book talks about what is happening to farmers in India because of extreme weather events, largely as told by farmers themselves. Its basis is the winter–spring of 2015 and the telling aftermath. The report is also a peek into the future—what we should expect as our planet continues to heat up due to the incessant increase in greenhouse gas emissions.

What propelled the Centre for Science and Environment (CSE) to put this report together, according to them, wasn’t merely the degree of irregularity in 2015. It was also that 2015 was the third year in a row when the rabi season was thrown out of kilter in large parts of India by deviant weather.