A question of control

Karnataka's new panchayati raj law has sparked a debate, with the Congress government saying it gives the people more power and opposition politicians contending it does not. 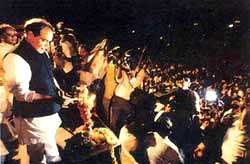 AFTER a nearly two-year break, Karnataka's pioneering panchayati raj experiment will continue in December and January, when elections will be held to village, taluka and district bodies under a new panchayati raj act. But in the run-up to the elections, the campaign to oust Karnataka chief minister M Veerappa Moily has virtually eclipsed a debate on the state's Panchayat Raj Act, 1993, which came into force on May 10.

The discord arose because the new act superseded a 1983 act introduced by chief minister Ramakrishna Hegde of the Janata Dal. According to M Y Ghorpade, Karnataka's minister for rural development and panchayati raj, the new act incorporates the essential features of the 73rd Constitutional amendment and establishes elected bodies at three tiers -- the village, taluka and district levels -- for "greater participation of the people". However, opposition politicians contend the act takes away powers given to the people by the 1983 Act (See box).

Does the 1993 Act permit the emergence of democratic bodies, as envisaged in the 73rd amendment? Karnataka has been at the forefront of decentralisation since 1959, when the Mysore Village Panchayats and Local Boards Act was enacted. The state has figured in the debate on decentralised rule ever since Hegde replaced the 1959 act with the 1983 act, "which was far more radical than the present (1993) one," says B K Chandrashekhar, a professor of law at the Indian Institute of Management in Bangalore, who is also a Janata Dal affiliate. "Making the 1983 Act conform to the 73rd Constitutional amendment did not require a new act," claims Chandrashekhar.

Hegde's act came into force in 1987 and the first five-year term of the panchayats ended on January 1, 1992. At this point, the Congress was in power and instead of holding elections, then chief minister S Bangarappa appointed administrators to replace the zillah parishads and mandal panchayats and continue village-level development work.

At the heart of the controversy is who should have more powers -- elected representatives or bureaucrats? This dispute features prominently at the district level, centring around who should head the zillah parishad -- the adhyaksha (president elected from among the members) or the chief secretary (an officer of the Indian Administrative Service).


The CEO is now required to report directly to the government, unlike the case in the 1983 act. However, considerable confusion persists in the 1993 act about to whom the CEO is accountable. Certain clauses in the 1993 act indicate it is the divisional commissioner.

The 1983 model instituted political control over the bureaucracy by providing that the "adhyaksha shall be the executive head of the zillah parishad." This led to tremendous resentment among Congress politicians, who were then in the opposition, on the ground that it conferred unbridled powers on adhyakshas without corresponding responsibility. The 1993 act deletes this section and Ghorpade justifies it by saying such power cannot be given to an individual like the adhyaksha. But experts like Chandrashekhar argue that adhyakshas could not abuse their power, saying, "The adhyaksha was elected by parishad members and could be removed for want of confidence or for persistently neglecting his duties."


Critics also point out the 1993 act gives the state government a stronger hold on panchayats. Says T R Satishchandran, a former chief secretary of the Karnataka government, "The government has retained more power with itself vis-a-vis the people in the 1993 act."

Chandrashekhar points out another area "which the government has reserved as an instrument of intervention". He says, "Under section 240 of the 1993 act, the government can specify from time to time the role of the three panchayats (gram, taluka and zillah) in respect of programmes and activities that are listed separately in the act, to ensure their proper coordination and effective implementation. But this means the functions of the three tiers have not been identified clearly." Furthermore, he says, "the government may, by notification in the official gazette, omit, amend or add any activity, programme or scheme covered by or mentioned in the respective schedule of activities for each tier." Because the act specifies only that the state legislature be merely informed about any amendments, Narayanswamy says, "Now, there is no scope even for a debate before any amendment."

Besides reducing the status of the adhyakshas, the new act boosts the importance of MLAs. Says Krishnaswamy, "MLAs have always felt threatened by the growth of panchayati raj institutions -- the new bill fully restores the power and the patronage of MLAs in their constituencies." This is substantiated by D Jayadeva Raje Urs, general secretary of the Karnataka Panchayat Parishad and a Congress affiliate, who says, "We conducted a survey in Dakshin Kannad district a year after the establishment of panchayati raj and found 60 per cent of the people had stopped going to their MLAs to get work done. Zillah parishad members had virtually acquired the status of MLAs. Naturally, the MLAs opposed the act."


Says Krishnaswamy, "In any federal structure, it is important that a person elected to a legislature cannot at the same time and on the basis of the same election become a full member of another elected body. This principle is violated in the 1993 act."

The new act says elections to gram panchayats will be on a partyless basis. While bureaucrats feel this is good, Satishchandran wonders, "How can someone be apolitical at this level when elections to all other bodies are on party lines?" The average villager, however, is rather indifferent. Ramaiah, a farmer of Gajjalgere village in Mandya district, says, "I don't know what we got out of the old panchayat or will get out of the new one. But if someone could solve the water problems of our village, I would be more than happy."

Satishchandran also says ecology gets a secondary place in panchayati raj: "Karnataka's biomass regeneration effort through social forestry didn't succeed because the people were not involved sufficiently." But, says K P Pandey, rural development and panchayati raj secretary, "The problem has been taken care of in the 1993 Act. There are provisions that empower gram sabhas (village assemblies) to manage resources like water bodies, wastelands and forests."

Some argue that regardless of what act is in force, the political will to pass power to the people is lacking. Therefore, the ordinary villager remains as far from self-governance as ever, looking upon the panchayat system as a mere aid-giving agency that builds roads and drains.

The very manner in which the 1993 act came into force itself is indicative of the political games being played. Though the Janata Dal has been critical of the act, it could have stopped it in the legislative council -- which it dominates. Says M C Nanaiah, opposition leader in the legislative council, "We agreed to pass the bill only after we were assured certain amendments we proposed were accepted." But Moily's assurances were verbal and nothing has emerged from them so far. Says Krishnaswamy, "If the government were serious, its understanding with the opposition would have been followed by a formal statement." The opposition, too, is not clamouring for its suggestions to be incorporated.

Satishchandran says the controversy of which act is better will not be fruitful. He says, "The statutory provisions are not so important as the spirit in which the law is implemented. We have to ask whether the political leadership and the legislature are committed."


Janata Dal members point out that panchayati raj institutions suffered from political indifference during Hegde's rule itself. One functionary, speaking on condition of anonymity, said, "The panchayati raj system in Karnataka breathed its last after the demise of Abdul Nazir Sab, the minister for rural development and panchayati raj, on October 25, 1988. Even Hegde lost interest or was too busy with other things."

According to the Krishnaswamy committee, developmental responsibilities had been transferred to panchayati raj institutions largely in the areas of agriculture and rural development, but the surrender of authority to local governments had been minimal in respect of public works, irrigation (including tanks), horticulture and forests. The 1989 report of the committee, which also consisted of P S Appu and L C Jain as members, noted, "The extent of power bears all the marks of ministerial and bureaucratic resistance that has been in operation before the coming into existence of these institutions."

The committee had pointed out, "The gram sabhas and mandals have indicated local needs and priorities, but there is no mechanism to help the mandals to weave them into an area plan. They have also not been provided with technical assistance to make an inventory of local resources. Except for a marginal 10 to 15 per cent, the bulk of development finance provided to them is committed to schemes conceived of by the administration prior to the establishment of decentralised institutions."

Pandey points out, "The earlier act was opposed by all politicians. On the whole, both politicians and bureaucrats opposed the act because apart from the devolution of power, more than half the finances of the state were transferred to the district."

A district collector who preferred anonymity, is sceptical about the 1993 act. "There may be several grand provisions in the new act. But what's the use when they will never be put to practice? Shouldn't panchayats be made into people's planning and implementation institutes? The Krishnaswamy committee's recommendation of mapping the natural resource base of the village has not been taken seriously."


In effect, panchayati raj has become synonymous almost throughout the state with making drains, roads and panchayat ghars.

Says U K Nayak, deputy secretary (administration) of the Mangalore zillah parishad, "A major reason why the 1983 Act didn't achieve the success it could have was because people were not aware about its provisions and objectives."

A senior bureaucrat who didn't want to be named said, "We follow a short-cut procedure: gather people together and ask them what they want. The responses are typical -- a tubewell, drains, maybe a road. But we don't get them to think of long-term projects like tree plantations and desilting tanks. That kind of work requires a lot of effort. We don't have the will and it is not possible in a target-chasing approach in which our efforts are ultimately judged."

C Nagarajan, ex-pradhan of Yeganahalli in Mysore district, is quite satisfied that he built roads, drains and tubewells in 10 villages. However, the idea of environmental regeneration doesn't occur to him. He asks, "Isn't that the work of the forest department and the soil conservation department?"

M A Madappa, who was the mandal panchayat president of Kannagala in Kodagu district, says, "Gram sabhas were a farce earlier and things aren't going to change now. One or two meetings were held and big promises were made. But the promises were unrealistic and the functionaries couldn't face the people when they couldn't fulfil them."

The Krishnaswamy committee report, however, noted that despite the limitations, the achievements were impressive. Says Krishnaswamy, "We found that in virtually all districts, schools and health facilities had improved and attendance of both teachers and students had gone up sharply. The progress in medical and health care, too, was significant. Though only a few development functions materialised, the promise existed of a progressive transfer of governance to panchayati raj institutions." He rues that the 1993 act allows stringent control over the panchayati raj institutions through the CEO and its ability to modify panchayat programmes.